Hardtop or soft, this is a fine Lexus.

By every dynamic measure, turning a car into a convertible makes it worse. Droptop versions of hardtops are heavier and less stiff, which makes them slower in a straight line and floppier through bends. There's added complexity from the stowable roof, and the pursuit of open-air motoring often comes at the expense of cargo space. And there isn't a convertible on the market that looks better with the top up than its fixed-roof counterpart.

In the case of the 2021 Lexus LC 500 Convertible, I don't give a damn. Take your argument that convertibles are worse and shove it – this slinky, open-roofed, V8-powered GT is beyond such mundane things. This softtop doesn't care that it's slower than the coupe or less agile. And to hell with your concerns about cargo space. Because the reality is that no matter what charge you level against the droptop LC, you can't change the fact that it's an excellent convertible.

All dogs are good dogs, but some are gooder than others. The same is true of convertibles. The best droptops offer fast-acting roof mechanisms, excellent wind control when open to the elements, and when the top is up, a cabin that's nearly as quiet as the fixed-roof counterpart. The LC excels in each regard.

Putting the roof down is easy, once you find the hidden switch. I struggled on this front, spending a good five minutes searching for the darn thing the day the LC arrived. At one point, I literally got out of the car to make sure I was actually sitting in a convertible. Stupidly, Lexus hid the control under the palm rest for its still-lousy trackpad infotainment system.

Switch found, the four-layer roof and its attendant mechanism did everything right to let the brilliant Michigan sunshine in. It takes the top just 15 seconds to open and a second more to close, while the ability to activate at up to 31 mph is invaluable both for taking advantage of suddenly good conditions or sheltering from suddenly bad ones. And although there's less cargo space than in the coupe (3.4 cubic feet versus 5.4), you have that space top up or down – lowering the roof doesn't eat into the trunk.

The top looks and feels substantial, and with it in place, the LC Convertible does an excellent impression of its hard-roof sibling thanks to smart design and active noise control technology. There's hardly any additional wind noise, and other sounds from outside struggle to penetrate the cabin. 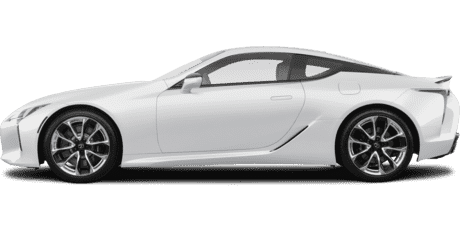 You'll want to leave the roof down as much as possible, of course, not only because the LC looks better with the top stowed – although the fabric piece has only a minor negative effect on the car's overall style – but because the cabin remains a pleasant, serene place while still letting the outside in. Lexus says the shape of the beltline and rear moulding, along with a teeny, tiny fixed wind deflector, are to thank for the car's excellent air management. The LC Convertible also has a larger wind deflector that deploys over the rear seats, but I didn't bother fussing with it because I didn't need to.

Lower the windows and the LC allows just enough wind to blow through your hair while driving at around-town speeds, so that even on hot days, topless motoring is still pleasant. If you're okay with a bit of wind, the LC works well at highway speeds with the windows down, too. But this droptop does its best at high speed and with the windows up, with the smart aerodynamic work providing an open cabin that allows conversation to flow at a volume only slightly above normal. Alternatively, you could also ignore your passenger and take in the excellent 13-speaker Mark Levinson audio system.

What You Give Up

The LC is a very, very good convertible (and a very good Lexus), but like all droptops, you'll give up a fair amount along the way. For a start, this is the heaviest version of an already weighty vehicle at 4,540 pounds, or 200 pounds more than an LC 500 Coupe, which is a smidge lighter for 2021. That's heavier than the battery-laden LC 500h Coupe, too, which has a 120-pound advantage. And despite its lovely 5.0-liter V8, there's no additional oomph – the LC Convertible packs a reasonable 471 horsepower and 398 pound-feet of torque, just like the all-gas hardtop.

Lexus says that only two-tenths of a second separate hardtop from convertible during the sprint to 60, but it feels far longer than that on the road. The LC Convertible's acceleration is leisurely at best, with strong linear power once it builds a head of steam. Like most big, naturally aspirated engines, off-the-line punch pales in comparison to a turbocharged engine. That said, the LC's relative lack of speed makes winding out its 5.0-liter all the more tempting.

There's no question you can enjoy more of this engine's breathtaking soundtrack in the LC Convertible, but it's not only partially because the roof goes down. With less straight-line speed, you can keep the gas pedal pegged longer before hitting extra-legal speeds, treating your ears to one of the best exhaust sounds on the market. And goodness, does this engine sound good without a top in the way.

Also carried over is the LC's lovely 10-speed automatic transmission, which is a willing companion in treating the driver's ears. Upshifts and downshifts in manual mode always come with an ear-pleasing bark from the exhausts. The biggish paddle shifters on the steering wheel feature a pleasant action, too. That said, you can still appreciate the LC's gearbox in full auto – it's more than happy hiding in the background while commuting, offering smooth and barely noticeable gear changes.

The wind and sunshine give this car away as a convertible, not the way it rides.

Handling has never been the LC's forte, and in the Convertible, it still isn't. This car is aloof, keeping its driver away from the action as best as possible, with numb steering. But while neither the steering nor the chassis give the driver enough info to be confident in aggressive driving, both are generally competent in everyday conditions. The steering builds weight well and offers excellent stability on center, while the suspension tightly manages the limited lateral body motions it allows.

The ride itself is very comfortable and composed, with the adaptive dampers doing a fine job of obscuring bumps and imperfections. Even with large 21-inch wheels and minimal sidewalls – the staggered tires offer 40-series rubber in front and 35-series rubber in back – the ride is compliant and pleasant on all but the roughest surfaces. And despite removing the roof, the body itself still feels stiff, with little in the way of cowl shake. The wind and sunshine give this car away as a convertible, not the way it rides.

From the beltline down and throughout the cabin, there's little mistaking this car for a Lexus LC. Its sheet metal is a beautiful evolution of Lexus' concept cars and the LFA supercar, while the cabin is every bit as high-quality as the brand's flagship LS – the material quality and fit and finish are impressive. As with the Coupe, there are four seats, but realistically, the LC is a two-seater. Those front chairs are deeply comfortable, while the low seating position and high transmission tunnel make this car feel like something you wear, rather than something you sit in.

Of course, wearing an LC is hardly an affordable proposition, whether you go Coupe or Convertible. The droptop carries a starting price of $101,000 even, or $8,050 more than the hardtop. While that seems pretty dear, Lexus actually charges a smaller premium to switch to a convertible than any of its competitors.

Relative to the cars customers will compare it with, the LC Convertible is a screaming deal.

And then there's the LC's inherent price advantage. Yes, the BMW 840i Convertible undercuts the Lexus at $97,400, but it's slower and less powerful. Meanwhile, the $112,000 Porsche 911 Carrera Cabriolet costs $11,000 more and the outgoing Mercedes-Benz S560 Cabriolet costs $138,600, or nearly $40,000 more. The Lexus LC Convertible isn't a bargain in the classic sense, but relative to the cars customers will compare it with, this is a screaming deal.