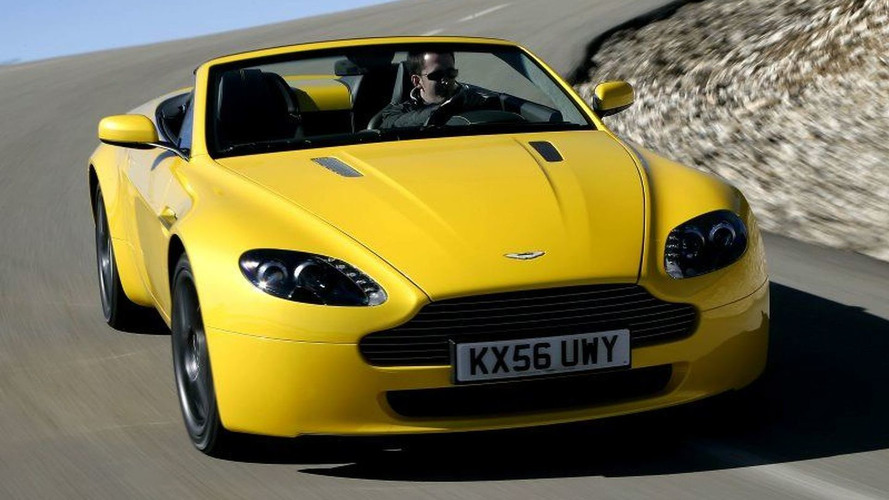 ...an Aston is a badge of gentile honour that commands more respect like a .357 Magnum without the inherent threat of violence. And now it's back in British hands, sort of.

Cruising through town it was easy to forget that this was downtown Birmingham, it could easily have been the strip at Monte Carlo. Some cars have that ability to transport you to a different world, a place where the sun always shines, beautiful girls always smile back and anything is possible. That’s the power of an AMV8 Roadster.

While a Ferrari can induce a positive flurry of abuse, a BMW marks you out as a selfish ass that should be blocked into a junction for the whole day if possible and the 911 signifies Goldfish-style levels of imagination, an Aston is a badge of gentile honour that commands more respect like a .357 Magnum without the inherent threat of violence. And now it’s back in British hands, sort of.

Prodrive’s David Richards has taken control with the backing of a UK-led consortium and Kuwaiti money. Dr Ulrich Bez is staying on and the motoring world is watching Aston Martin very closely.

The Volvo switchgear should soon bite the dust and Richards is a racer, he just won’t be able to help himself taking the Prodrive performance pack that has already been unveiled for the AMV8 to the mainstream. So soon his cars will come with the outright speed to match the kind of looks that leave supermodels crying about their flabby hips and refusing to go outside.

A shrunken version of the DB9, the AMV8 is by far the sexiest of the Aston Martin line-up thanks to it’s taut, compact lines. That long, vented snout bleeds back into that shallow-raked screen and creates the kind of silhouette we all drew at school when we should have been solving maths equations.

The flattened back end is the inevitable price of the rag-top and this isn’t quite a match for the perfectly-contoured fixed head version in adverse weather. The rear light cluster of our lurid yellow test car is perhaps a little brave, too. There was little doubt within the Aston press office, though, that this was the colour that suits my less than subtle personality, which could have been a compliment – possibly...

But in any colour, when the canvas is folded carefully away and the fairings are clearly visible, this car is so beautiful it makes anything else on wheels look so ugly it should be fed through a hole in the cellar door.

Even the stitching feels special and sliding into this car will bring a smile to your face faster than pills in a nightclub. The embossed wheel, the beautifully crafted binnacle, even the ever so slightly cheesy ‘Power, Beaty, Soul’ welcome message, it can all leave the driver giggling with pure joy before the car has turned a perfect black wheel. Then it just gets better.

Aston didn’t just design the coupe and then hack the roof off the bonded and riveted aluminium structure with no forethought. This car was designed as a roadster from the ground up. That ensures the car keeps its looks while finding space for the soft-top that disappears at the touch of a button in the time it takes traffic lights to change, or at speeds of up to 30mph, and prevents the chassis contorting like a Romanian gymnast every time it hits a pothole.

The Roadster comes with a stronger cross brace behind the dashboard and a stronger aluminium undertray. The A-pillars, too, look like they could hold the roof of a church. Of course this is all compensation, and it still doesn’t have the strength of the coupe, not quite anyway.

But as soon as I buzzed the throttle and one of the finest sounding creations to come from the hands of man burst into my ears with no glass, plastic or metal to distort, deflect or pollute that sweet music, I forgave it in advance any slight quiver on the ragged edge of adhesion. Let’s face it, an Aston Martin just shouldn’t be doing that kind of thing anyway.

The AMV8 is by far the most chuckable car in the line-up and feels fantastic on a hard charge. But the only place you’ll truly feel the difference between the Roadster and hard-top version of this car, that infinitesimal secondary judder, is rattling over the sawtooth kerbs of a race track. And that’s if you’re good.

The laptimes would be near inseparable, too, thanks to a suspension set-up that is 14 per cent stiffer at the front and 17 per cent at the rear that means on a flat surface this car corners harder, faster and flatter than the coupe. But talking laptimes with an Aston Martin is to wilfully miss the point. This is no track car, it is perhaps the most sporting Grand Tourer in the world and the drop-top version belongs on a winding mountain road, where it would provide the most beautiful, tactile and complete driving experiences you could ever wish for.

Even the great Ferrari could learn lessons from Aston Martin when it comes to soundtracks, and if the stereo is on at all it should be stuck on Ride of the Valkyries. Driven on a touch of throttle it’s a quiet and civilised companion, but then the bypass valves blow open and the sound of a Spitfire, good old fashioned V8 muscle, fills the air.

Then there’s the meaty steering and butch six-speed gearbox that takes a proper flex of muscle to drive home into the next gate. This isn’t unintentional, it’s done to keep enough space between this and the DB9 and appeal to a youth audience craving a car that doesn’t do everything for them. The Sportshift semi-automatic is now on the market, will sell in spades and the owners will love them, but the six-speed is the romantic’s choice.

On the road from Aston’s Gaydon headquarters I could literally feel every sinew, every one of the 1710kg of the car at work and loved every rev-soaked second. And when you look at the numbers, that’s a bit of a surprise.

The Roadster hits 60mph in 4.9s and will top out at 175mph, so a derestricted Mercedes SLK could take it in a straight race. A 911 will leave it behind, the M6 Cabriolet will blow it off the road and there are a good few other cars in this price bracket that technically make for a better equation. But this is the car we wanted as children, and this is the car we doodled in school, even though we wouldn’t see it for another 20 years.

And any car that can make Birmingham feel like Monte Carlo, well that is a feat that goes beyond mere engineering. This is a fantasy car that can change your world and take you to a better place. For that, it will remain forever dear.