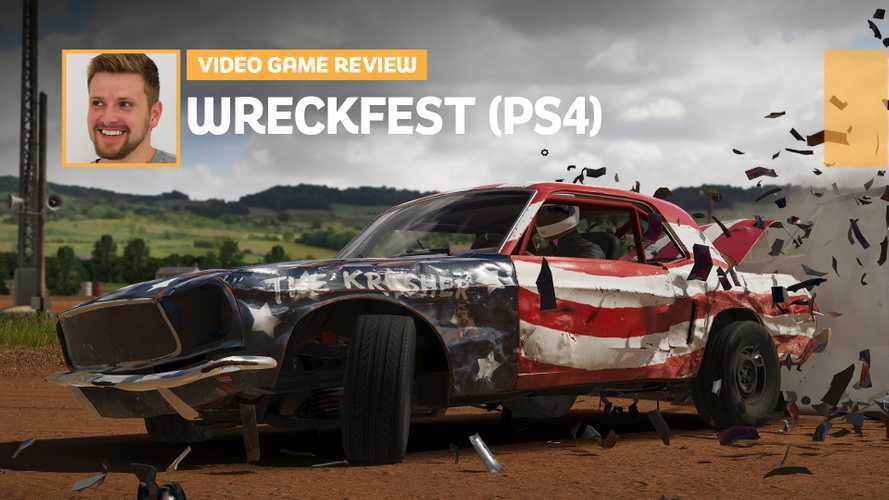 Destruction, brought to your living room.

Great racing simulators are a dime a dozen. The Forza franchise seems to have nearly perfected the form, as has the long-running Gran Turismo series, as well as others like Project Cars and iRacing. Wreckfest, while great, isn't the same traditional racing simulator as some of the games aforementioned. But it's not a totally nonsensical arcade game, either. This is balls-out banger racing and ridiculous demolition derbies brought to your living room. And it’s done with impressive realism.

For the record, Wreckfest has been available on PC since June of last year. But only recently have its publishers, THQ Nordic, made it available to console owners. We got early access to the game on Playstation 4 and spent countless nights in front of our TV screens playing it. You know, for journalism.

Wreckfest differs from traditional racing sims in that it offers an assortment of vehicle types, not merely brands. There's generic American muscle, Japanese domestic market (JDM), school buses, lawnmowers, double-decker cars, and couches (yes, couches) to select. But it takes slogging through the multi-tier career mode to unlock many of them – the game’s specialty vehicles in particular.

A nonproprietary red-white-and-blue Rocket is the lone starter car, which resembles a mid-'60s Ford Mustang. This car is fine as an entry point. It handles well and is brutish enough to jostle competitors (more on that later), but you'll quickly want to spend coin on something more powerful. Our choice is the Rammer RS, a rear-wheel-drive, American full-size sedan based loosely on a 1986 Chevrolet Caprice. But virtually every vehicle brings something unique to the table. Ultimately, it all depends on the preferences of the user.

You can dress up your cars, too. Each one wears a weathered, faux hand-painted livery with various customizable paint schemes, numbers, flames, and stripes. But there's only a limited amount of pre-set paint and number options to choose from. More freeform options would be nice (mostly so we can try and recreate retro NASCAR schemes).

Given its name, Wreckfest is, unsurprisingly, about smashing and crashing first and foremost (the game’s crash-centric trailer also gives this away). But don't underestimate its capacity as a serious racing game. For one, Wreckfest is genuinely challenging. It takes skill to perfect flawless controlled drifts or find the ideal braking points as grip levels shift when moving from mud, to gravel, to tarmac. Most of the tracks are impressively accurate to real-world rallycross settings (apart from the loop-dee-loop and massive jumps on some), and dynamic obstacles, like cones and tires, make it all the more difficult. The AI is genuinely competitive, too. Even in the easiest setting, computer competitors will out-corner you, crash you out, and leave you in the dust if you don't know what you're doing.

Wreckfest does at least offer customizable driving assists to aid the less-skilled gamer. You're able to tune the suspension, steering, and traction control on a very rudimentary level: either tighter or looser. There are also available upgrades for things like power and agility; and it only takes winning a few races before you’re able to afford most of them.

The hulking American muscle cars, like the Rammer RS we love, are especially tricky on the track. They squat dramatically on their soft rear springs, throw their massive weight around in turns, and take a minute to get up to speed, much like a real car would. There are obvious advantages to using smaller cars like the Tristar – a buzzy Datsun 510 replica that's extremely light and tossable – but when accounting for damage (and, you have to), more muscle makes sense.

Damage sits on a 100-point sliding scale and offers two different settings to select: normal and realistic. Normal damage makes your car tougher; it can easily shrug off minor bumps and bangs in this setting. But normal damage means no body panel or tire is safe from potential destruction. And yes, tires do fall off – annoyingly often. Running into static objects, like concrete barriers and trees, does the most damage. But bashing into your competitors isn't as damning. After all, that's sort of the point of Wreckfest. Too much damage and you will wreck yourself out of the race. It happens frequently, sometimes ending in a dramatic barrel roll or flip. It's awesome.

Of course, there are a ton of race and demolition derby options to choose from, so no one experience is the same. Need to take your rage out on a bunch of Reliant Robin rip-offs with a school bus? You can. Want to outgun a bunch of couches in a faux Superbird on a figure-eight track? You can do that, too. Wreckfest is all about variety.

On the technical side, Wreckfest could use a few basic tweaks. Load times between races take extremely long in comparison to other games, as does the time it takes to switch cars between online races. There is no local multiplayer, either, which is an issue growing more common on console games. That said, we expect it on an arcade-style racing game like Wreckfest.

Online gameplay, outside of being exceedingly difficult and frustrating for newbies like myself, isn't perfect either. Users can't create their own sessions, and Wreckfest servers fill up really quickly when inviting friends. But these are all relatively minor gripes in the larger scope.

Wreckfest is an extremely fun game that finds a comfortable niche between overly serious simulator and punchy arcade racer. The graphics are fantastic, the dynamics are, too, and there are tons of cars, tracks, and incredible crashes to keep everyone happy. And at just $39.99, it's a relative bargain.