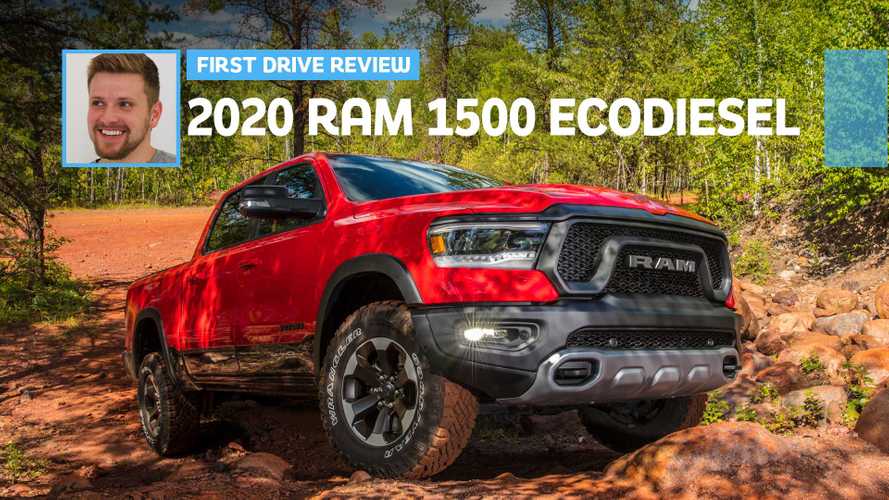 The best half-ton truck gets better with a diesel.

Once upon a time, trucks needed to do two things well: tow and haul. These days, towing and hauling fall somewhere toward the bottom of a laundry list of other features consumers crave such as comfort, tech, and fuel efficiency. The 2020 Ram 1500 ticks virtually all of the desired boxes. It's posh and modern, yet still extremely capable. But the best version might be the new EcoDiesel.

Selecting Ram's 3.0-liter diesel V6 doesn't demand sacrifice. The same advanced chassis, impressive tech, and excellent optional air suspension from the gas-powered model carry over. But with the diesel engine, the Ram bests its competitors in both torque and towing, and offers fuel efficiency (though unconfirmed) to the rival Chevrolet and Ford options. The 2020 Ram 1500 EcoDiesel still offers the things truck buyers need, while not skimping on the modern features they want.

Ram's third-gen 3.0-liter EcoDiesel V6 adds to the 1500's already impressive engine repertoire. Joining the 3.6-liter mild-hybrid V6 and two versions of the 5.7-liter Hemi V8 (one mild hybrid), the new diesel is the best of the four fantastic powertrains on offer.

Ram's 260 horsepower figure isn't best in class. The 277-horsepower Chevrolet Silverado Diesel gets the nod instead. But torque is more important, and buyers should salivate over the 1500 EcoDiesel's 480 pound-feet of torque. That impressive twist bests both the Ford F-150 Power Stroke (440 lb-ft) and Chevrolet Silverado Duramax (460 lb-ft), and gives this 5,748-pound truck genuine straight-line punch from the very bottom of the rev range.

A touch of throttle propels the 1500 EcoDiesel off the line with some enthusiasm. Nail it, and the eight-speed automatic quickly transfers torque to the rear wheels, moving the 1500 EcoDiesel with genuine, grin-inducing force. This is still a big truck and feels properly large (especially with the Rebel’s off-road options, as tested), but it's light on its feet comparatively and features a supremely comfortable ride.

Thank the optional air suspension system, in part, for the Ram's supremely good on-road manners. The same components from the gas-powered model carry over. Mixed with impressive noise-canceling technology, which also conceals the diesel engine note very well on the highway (though, it is noticeable at low speeds), and sublime build quality, the Ram 1500 EcoDiesel rides more like a luxury car than a half-ton truck – even with knobby 33-inch tires on the Rebel model.

Ram still isn’t providing fuel economy figures for the 2020 EcoDiesel. Over 120 miles of driving, though, principally in a straight line on smooth, paved roads, our Rebel returned a combined 25 miles per gallon. The Limited model later in the day improved on that figure by around one mpg. Compare that to the F-150 (25 combined) and Silverado (27 combined), and Ram’s diesel is in the mix with its competitors.

At full strength and with the appropriate option boxes ticked, the Ram 1500 EcoDiesel can tow up to 12,560 pounds. The next-best F-150 only tugs 11,500 pounds, and the Silverado trails in third with a measly 9,300 pounds. And moving all that weight (in our test case, a massive speedboat) barely elicits a shrug from the torque-heavy Ram.

What separates the Ram 1500 EcoDiesel most notably from the F-150 and Silverado is its available off-road Rebel trim. The same rugged features from the gas-powered Ram Rebel carry over here – 33-inch tires, Bilstein dampers, a one-inch lift, and running boards included. But now the tough stuff pairs with more torque, plussing up the Rebel's impressive off-road abilities more so. Ford and Chevy simply don’t offer their diesel engines in an off-road specific trim like the Rebel.

On a challenging dirt course near the outskirts of Gilbert, Minnesota, littered with deep mud puddles, a hill climb, and big rocks, the diesel-powered Rebel proved its metal. The immediate torque (more than that found on both the battery-aided eTorque engines) makes throttle modulation over a twisting, upright stony hill easy. There's little-to-no unnecessary pedal travel before power arrives, and the eight-speed automatic in the pre-selected low-range gearing keeps the revs up as we climb. The locking rear diff, available on all Rebels, including the diesel, helps finish the job.

What separates the Ram 1500 EcoDiesel most notably from the F-150 and Silverado is its available off-road Rebel trim.

The Ram 1500 EcoDiesel met a daunting vertical slope with the same enthusiasm. Tons of torque with simply a toe’s worth of throttle pressure and the massive truck moves up the slippery dirt incline willingly. A Ram engineer encouraged us to stop halfway up and let off the brake. We do so… hesitantly at what feels like an unsafe angle to test the Ram's physics-defying hill-hold feature.

Diesel power paired with the standard Rebel's capable kit means this truck excels in the tough stuff. It's more impressive than its gas-powered sibling in some cases, most notably when climbing uphill. The only downside (and it's an extremely minor one) is the additional engine noise the diesel creates. It's a bit loud from the outside and noticeable in the cabin at higher revs.

The Ram 1500 was already impressive without an available diesel engine. What sells us on the diesel model, though, is the additional torque and towing, the available off-road Rebel option, and most importantly, price.

Other 1500 trims – Tradesman, Big Horn, Laramie, and Rebel – ask a $3,300 premium for the diesel engine. Things do get pricey with options, though. Our diesel-powered Rebel tester, with virtually every box ticked, costs north of $60,000. And Ram wants more than $68,000 for a loaded Limited model.

But even the base EcoDiesel model will impress. Before options, it's a best-in-class towing machine with tons of torque, sharp styling, and capabilities you expect. With options like the touchscreen with Uconnect, full leather, and an adjustable air suspension, the Ram 1500 was already the best half-ton truck you could buy. The EcoDiesel makes it even better.