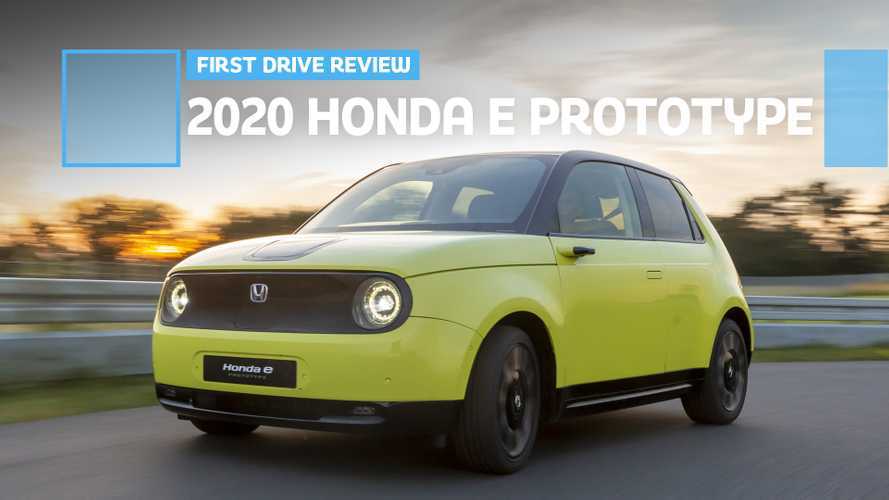 We’ve been waiting a long time for this. When the Honda Urban EV concept debuted at the 2017 Frankfurt Motor Show, it was met with critical acclaim from media enamored by its adorable looks and promise of small, characterful all-electric driving. Production confirmation quickly followed the debut, and while the mass-made version was never likely to be as artisan as the concept, the final car that debuted at the 2019 Geneva Motor Show still made us happy.

And now, we’re back in Frankfurt to drive it. Okay, so it’s actually a prototype, shipped from Japan after some convincing from Honda Europe. The vehicle’s project leader, Kohei Hitomi, tagged along to witness a ham-fisted batch of journalists set out in 20-minute sessions on a tight artificial course. But while it’s officially called a “Prototype,” there’s not much here that isn’t production-ready. The remaining bits, Honda says, are mainly cosmetic (dash plastics, infotainment and so on).

Honestly, it still looks like a concept car. Honda’s simple, “quiet” design successfully hides the bits that clutter normal cars. Concealed windshield wipers are one thing, but designers cleverly disguised all the driver-assist systems behind the black nose panel. The door handles are retractable and there are no door mirrors. By using a rear-view camera system instead, Honda adds to the E’s futuristic appearance and charm.

This is a small car, barely 12 feet 7 inches long. The design intentionally references the 1970s Honda Civic. But those headlights, more like puppy-dog eyes are charmingly endearing. No wonder our hearts melted.

Time to toughen up and concentrate on the serious assessment. But not before being wooed by the characterful cabin (Editor’s Note: Honda didn’t provide images of the cabin, citing the unfinished components.), complete with retro 1970s-style wood-effect trim, an oversized two-spoke steering wheel, modern upholstery, and brown seatbelts. You sit high, on firmly supportive, premium-feeling seats, and enjoy fantastic visibility. With no door mirrors, it feels like you have a 180-degree view of the road ahead.

The cameras feed two monitors on either side of the central infotainment screens. There’s a familiar EV readout ahead of the driver, and more comprehensive touchscreens in the center. It all looks modern and impressive – here’s hoping it’s a quantum leap on Honda’s rather sub-par setups it installs in its cars today.

Those in the front step in through massive door openings – it’s genuinely a walk-in car. Rear-seat passengers pay the price, though, because access is much tighter. Once in the back, there’s enough space for adults on the soft bench, but it’s still a squeeze.. The trunk is tiny, too – a tacit admission of this shortcoming is the easy-use handle on the center of the rear bench seat. Flip it, and the seat folds flat for a much more cavernous luggage space.

The boot has a high floor because, yes, the motor is mounted beneath it. A 35.5-kilowatt-hour lithium-ion battery pack sits low within the bespoke EV platform, so it takes up as little space as possible. Hitomi-san explains that this is how you optimize an electric car: rear-wheel drive for traction and batteries down low for a beneficial center of gravity.

Once behind the wheel, we press the button for “drive” and nail the throttle, startling the Japanese engineer riding shotgun. It feels good – 62 miles per hour arrives in around eight seconds, per Honda. That’s not quite as, ahem, electric as a Tesla, but it’s plenty nippy. You can deploy more of the torque more of the time though, without having to worry about steering fight or traction control hysteresis.

It goes without saying that the Honda E Prototype is quiet, all electric cars are, and spookily so at low speeds. This one is particularly peaceful though, with little motor whine (sticking it out back helps here) and very good isolation from outside noises, even during the few seconds I managed to reach 50 mph. I drove it during a European heatwave and the temperature gauge was reading high 90s, yet even the climate control was hushed.

Another highlight is the EV’s ride quality. It’s always hard to fully judge this on test tracks, but subtly going off course (to just a hint of a quizzical look from the engineer) didn’t generate any drama. The overall absorbency seemed very plush and cushioned, with a relaxing roll-along feel that matches the Honda E Prototype’s friendly appearance.

The E did lean a bit in corners (you can see that from the images), but the low center of gravity means it never feels top-heavy. The E is sure-footed and stable throughout, even after umpteen laps of the course, by which time we’d found a rhythm and invariably started to focus on driving as quickly as possible.

The E did lean a bit in corners, but the low center of gravity means it never feels top-heavy.

But perhaps the most eye-opening experience when driving the Honda E Prototype comes at 2 mph. The fully-optimized EV platform allowed the engineering team to give it an incredible turning circle of just 14 feet 1 inch. In other words, barely longer than the length of the little Honda itself.

Experiencing this for the first time is incredible. We can wind on more and more lockending up quite dizzy after so many super-tight turns.

“We wanted to make the world’s best urban EV,” said Hitomi-san later. “We knew we had to make the turning radius as small as possible.”

And then, to our patient chaperone’s relief, time was up. We rolled back to base, surprised at just what a pleasant and satisfying car the Honda E Prototype seems to be. Honda makes no bones about it: prices will be premium, with rumors pointing to much as 40,000 euros ($45,000). But if ever a small EV felt worth it – felt like the “iPhone of electric cars” Honda is targeting– it’s this.

For now, this is how Honda is staking its place in the world of EVs.

There’s just one more barrier to overcome: range. In a world where 300 miles is becoming the norm for electric cars, the Honda E looks like it will offer just 124 milesHitomi-san insists Honda has made the right call with that distance, though. This is a city car with clear benefits and advantages as a result.

Give the batteries more range and you make the car and the price bigger, or the car lower quality. Longer-range Hondas will follow, as will larger ones and less feature-packed ones. For now, this is how Honda is staking its place in the world of EVs.

As we jump out, Hitomi-san looks on from indoors. He clocks our beaming grin; he’s smiling too. He may well have created the feel-good car of the moment. Let the debate rage about price and range, because we’re just looking forward to getting back into a Honda E.

Hurry back to Japan, Hitomi-san, and get them rolling off the production lines. Because you might just have a little hit on your hands.