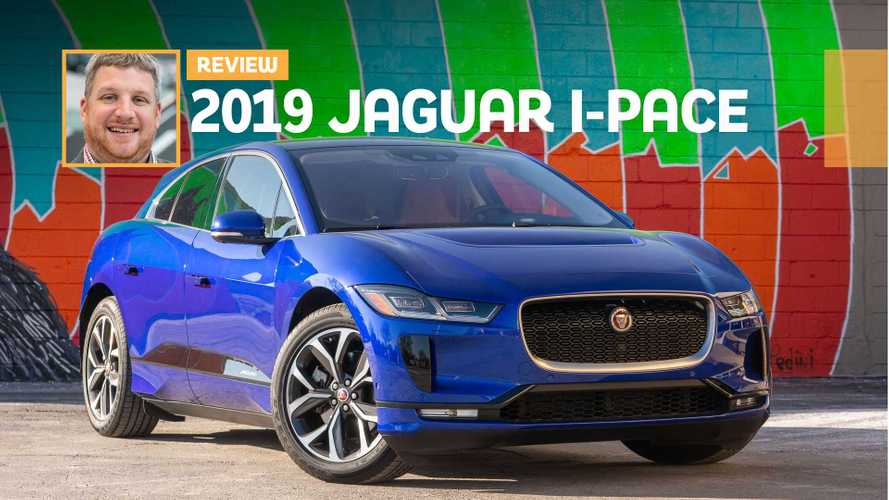 There’s something inherently funny about an electric vehicle coming from a country with such an established history of building cars with electrical problems. But as we found out while sampling the 2019 Jaguar I-Pace earlier this year, there’s nothing funny about this car. Fun, yes, but certainly not funny.

A week with the I-Pace on Detroit’s frigid, pockmarked roads reaffirmed this take… even if it also proved that the first electric Jaguar isn’t quite ready for a family's everyday use, particularly in a climate as cold as Michigan’s.

The I-Pace is extremely pretty. Sure, the I-Pace can’t really decide whether it’s a car or a crossover or a two-box design or a three-boxer, but at least Jaguar isn’t trying to call this a coupe, right?

Jaguar’s current design language looks great on the I-Pace. The prominent rectangular grille with its rounded edges sits between slim headlights that look like the eyes of a predator – the I-Pace shares this look with the XE, XF, and F-Pace. The profile is slinky and svelte, with a small rear deck, while the tail features slim LED taillights. The little elements are what works with this design, though. We dig the vent on the hood, which reminds us of the C-X75 Concept, the aggressive rake of the rear window, and the prominent hips. And while a high-riding vehicle means a higher center of gravity, the I-Pace’s standard height is just right – it looks great in profile.

The I-Pace’s cabin is thoroughly modern, with three displays for all the pertinent information and touch-capacitive controls. The floating-bridge design for the center console looks great and gives the cabin a cockpit-like feel, while details like the harness loops in the two-piece seats feel impressively sporty. Smaller touches, like the splashes of trim on the dash and doors, are more modern and in keeping with the glass cockpit.

And while paint color doesn’t necessarily influence the score, it’s worth mentioning how beautiful the I-Pace’s Caesium Blue finish is. It pairs beautifully with the Sienna Tan and Ebony leather in the cabin.

Slinky and beautiful it may be, but the I-Pace isn’t big on space. The cabin feels claustrophobic, especially compared to the Mercedes-Benz EQC and Audi E-Tron and their more conventional crossover shapes. Front-seat passengers have it best, with the I-Pace’s roughly cab-forward design granting more headroom.

The two front bucket seats are impressively comfortable and supportive, in addition to looking good, but life is trickier for passengers in the back row. Headroom is tighter, and because the I-Pace’s dash extends so deep into the cabin, driver and front passenger have to choose between their own legroom and that of second-row passengers. With that in mind, and after a week at the wheel, we have to say the I-Pace would likely be a better servant to a pair of empty nesters than a still-growing family.

Whoever ends up buying the electric Jag, though, will still find a relatively comfortable product. The standard 20-inch wheels aren’t the best choice, and compared to the Mercedes-Benz EQC and Audi E-Tron, the I-Pace certainly has a rougher ride. But even pockmarked roads don’t leave the I-Pace flustered – the air suspension manages bumps and imperfections by clearly transmitting their impact into the cabin, but rarely disturbing the steering or the I-Pace’s ability to change direction.

The way the Jag gets to that speed, though, is very similar to the Germans. This is an electric car, and its two motors dole out torque-rich performance in big, immediately available lumps. Part of that is down to the single-speed automatic transmission. It’s quick to engage, so there’s hardly any waiting while the torque gets to the ground.

But the I-Pace’s handling differs from its rivals. This is a charming dance partner, tipping the scales at a light (for the segment) 4,784 pounds. Its lower center of gravity – the I-Pace is only 61.3 inches tall, over two inches lower than the next closest rival, the 63.9-inch EQC – and more aggressive air suspension deliver a sharper, flatter handling character. You want to toss the I-Pace around and have some fun with it; take advantage of the quick steering and the darty way it can change directions. It’s quite a change of pace from taller, heavier rivals that focus on ride comfort.

Jaguar, like other EV manufacturers, has also figured out how to do brakes well. See, when you hit the brake pedal, there’s nothing mechanical happening with the actual brake pedal – the calipers aren’t clamping down on the discs. Instead, it’s regeneration from the motors that’s reining the I-Pace down to a certain speed, which is when the friction brakes kick in. If you’ve only experienced the clumsy all-regen braking on something like a Toyota Prius or Ford Fusion Hybrid, you’ll be blown away by how easy the I-Pace’s (and its rivals’) regen brakes are to use.

The nerve center of the I-Pace’s technology suite are a pair of touchscreen displays that make up the center stack. The larger 10.0-inch upper screen handles the bulk of the work and is where owners will make most of their inputs, while the lower 5.5-inch screen displays and the two digital dials that flank it are responsible mostly for the climate control systems.

This would be an okay system if the touchscreen controls were any good. Aside from being hard to read in direct light or with polarized sunglasses on, they’re slow to respond to commands and offer no feedback when accepting a command. This isn’t much of a surprise – we’ve had similar complaints since Jaguar Land Rover started pushing glass cockpits – but it’s still disappointing.

Thankfully, Jaguar made some changes to the infotainment system that make changing regen modes easier. But while the I-Pace still requires owners to dig into the touchscreen to switch between one- and two-pedal driving (and even then only offers two levels of regen) Mercedes-Benz and Audi make it as easy as pulling a wheel-mounted paddle. We wouldn’t be surprised to the see the I-Pace add such a system as part of a mid-cycle update, if only to minimize how often owners need to interact with the display.

The Jag claws back points in this category, though, for the level of standard equipment on offer. Our HSE tester carried LED headlights with automatic high beams, a glass roof, both the touchscreen displays as well as a 12.3-inch digital instrument cluster, an 825-watt Merdian sound system, a wireless internet hotspot, and a host of active safety systems as standard. Even if you go with the base I-Pace S, you won’t get short-changed. It still features LED headlights, the same glass cockpit with navigation and a wifi hotspot, a 360-degree camera system, lane-keeping assist, and automatic emergency braking. That’s some high-level gear for a base model.

Optional extras are an I-Pace strong suit too, even though the car in question has just $9,100 in extra equipment attached. The highlight is the upgraded seats, which have both heating and ventilation function, while a neat ambient lighting system, four-zone climate control, a head-up display, and JLR’s nifty Activity Key are also present.

Neither crash testing institution has wrecked the I-Pace yet, so our tester earns no points for its ratings. That said, this HSE model carries a wide range of active safety systems: adaptive cruise control, full-speed automatic emergency braking, lane-keeping assist, as well as an excellent set of LED headlights.

Like JLR’s other cars with similar systems, the active safety gear works well. There’s a minimal amount of ping-ponging between lanes, and the I-Pace’s adaptive cruise control responds predictably. Considering the I-Pace aced the Euro NCAP crash test, it's likely that if NHTSA and the IIHS ever crash the I-Pace, the Jag will return impressive safety ratings that would elevate the I-Pace’s safety score.

According to the EPA, the I-Pace’s 90-kilowatt-hour lithium-ion battery carries enough electrons to cover 234 miles per charge. While that’s considerably more range than 204-mile Audi E-Tron and will likely best the Mercedes-Benz EQC, we never saw range estimates beyond 185 miles, likely owing to wintry conditions during testing. The I-Pace's 76-mpge efficiency rating is what really hurts it though. Other EVs, like the Tesla Model X, simply make better use of their electrons.

According to Jaguar, the I-Pace’s charge time is a little behind the class. Going from zero to 80-percent charge on a 240-volt outlet takes 10 hours, while the EQC can get from 10 to 100 percent in the same time. Going zero to 100 percent in the E-Tron takes nine hours. Find a DC fast charger and the I-Pace can handle a 50-kilowatt charge rate, and will go from zero to 80 percent in 85 minutes. That’s considerably behind the newer EQC and E-Tron, which have DC charge rates of 110 and up to 150 kilowatts, respectively.

Prices for the I-Pace start at “not cheap” and extend on up to “expensive.” Getting your hands on an I-Pace requires at least $69,500, not including a $995 destination charge or a $7,500 federal income tax credit. That’s a healthy saving over the $74,800 Audi E-Tron, although its roomier shape might make the premium worthwhile. Joining the ranks of Tesla owners in the base Model X requires at least $71,950.

If you want the Caesium Blue example shown above, plan on shelling out $89,638. That price covers the $11,000 premium for the range-topping HSE trim, along with a host of desirable options. Those include 14-way heated and cooled front seats ($2,400), but surprisingly, the rest of the options are all firmly in the three-figure range. That includes $970 for a head-up display, $900 for a suede-like headliner, an $800 four-zone climate-control system, $700 for Jaguar’s adaptive dynamics, and $575 for that eye-catching paint, not to mention a host of options that are so inconsequential they aren’t worth mentioning here.