Accommodating tech occasionally irritates, but a dynamite interior and a comfortable driving experience win out.

For better or worse, the 2019 Mercedes-Benz A-Class is stereotypical of the iconic German luxury brand. From its gorgeous cabin to its bleeding-edge technology to its comfort and composure, the A-Class is a Mercedes through and through. But there are drawbacks to its Mercedes-ness. 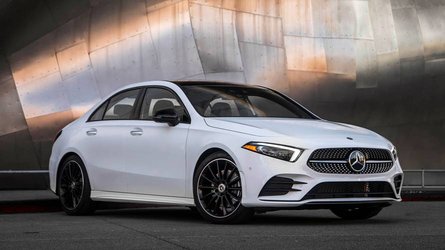 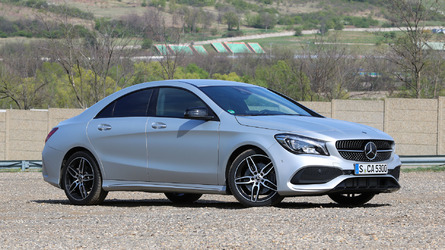 The A-Class suffers from a high price, not to mention a lack of user-friendliness from its new infotainment system. Just as genetics can bless humans with good traits, it can also pass on some less desirable ones. And the same is true of Mercedes' new compact sedan.

Well, it's certainly priced like a Mercedes-Benz. While the base A220 starts at $32,500, our 4Matic-equipped tester adds the entire kit and kaboodle. The result of options like the upgraded MBUX infotainment system, active safety gear, 64-color ambient lighting system, and, of course, racy looks of the AMG styling pack is an as-tested price of $50,660. It's a good thing Mercedes isn't charging by the foot because there's not a lot of car for the money.

But what's here is good, and the price isn't so egregious compared to its chief rival, the Audi A3. Driving the four-ringed compact means shelling out the same amount of cash – $32,500. And that's before dipping into the three available trim levels. The A-Class has no trims, just packages, which is easier to interpret and configure. That said, a loaded A3 Prestige with the more powerful 228-horsepower turbocharged four-cylinder and Quattro all-wheel drive undercuts our A220 easily, sneaking in just below $48,000.

The A-Class ditches the swoopy styling pioneered by the CLA-Class for something a bit more mature. It's like Mercedes ditched the Supreme hoodie and Chucks for a well-tailored sports coat and leather loafers from J.Crew. The result is an attractive but anonymous exterior design.

Our tester stands out more than the norm, though, thanks to its optional 19-inch AMG wheels and associated body kit. As we said during our first drive, we're eager to get a look at the $339-per-month-lease cars that will eventually start arriving in dealerships.

That's true of the cabin, as well. Our tester wears optional contrasting leatherette, and while there's an attractive black-and-white scheme or a tasty toffee-and-black shade available, our silver sedan features a garish black-and-red palette inside. Ignore the eye-catching leather, though, and this scaled-down E-Class cabin is a sight to behold, complete with ample real aluminum accents and interesting shapes, like the circular HVAC vent housings and the ball-socket-style vents. It's an extremely pretty interior. In fact, if you're currently driving a CLA and are looking to upgrade, the A-Class's handsome insides are the single best argument we can make for pulling the trigger.

The front seats are supportive and comfortable, but they're also a bit cozy. Headroom is at a premium, although the front seats offer a wide range of adjustments to make the most efficient use of the available space. Heating and ventilation certainly help matters, as does the adjustable lumbar support.

The back chairs are more of a mixed bag. While you can put a couple adults in back, we'd hesitate to force the second row on them for more than 45 minutes to an hour. But working in favor of the A-Class is its more conventional roofline relative to the CLA-Class. Although the backseat is snug, ingress and egress are far easier than in its swoopy sibling, while visibility from the back is much improved, too.

Cargo space is merely adequate, with 8.6 cubic feet (or just 70 percent of the 12.3 cubes available in the A3). That's a bit more than a weekend's worth of bags. There are ample little cubbies and such in the main cabin, though, and a sizable slot in the door, a healthy center console storage bin, and a generous glovebox. We also like the little iPhone-sized cubby beneath the HVAC controls, where drivers can find an optional wireless charge pad.

We could go on for a week about the tech in the A-Class. After a mixed review of the MBUX infotainment system following the A220's launch in Seattle last September, we're here to confirm that it still doesn't feel like a fully baked product. The aspects that worked well in Seattle work just as well in Detroit: the augmented-reality navigation remains revelatory and the primary physical interfaces for MBUX are extremely impressive.

During our week with the car, we routinely cycled between the steering-wheel-mounted controls, the center touchpad, and the touchscreen itself. Each felt natural, interpreting our commands quickly and smoothly. The twin 10.3-inch displays are lovely, too.

But the fourth interface remains an issue. MBUX has some of the best voice controls around, but that's like saying you're the valedictorian at clown college. While MBUX didn't sass us as it did during the first drive, it seems like Mercedes has replaced that bit of personality with a more generic response. During our week behind the wheel, MBUX answered most questions it didn't understand – and especially the ones that required it to reach up to the cloud for answers – with a repeated “How can I help you today?” or a “What would you like to do?”

The A-Class does earn points for its variety of standard and optional equipment. Both Android Auto and Apple CarPlay are here, in case you don't want to use MBUX. We're also huge fans of the impressively adjustable ambient lighting system, which features 64 individual colors as long as a number of multi-color presets and the ability to select from different zones and adjust the brightness in them..

Like most other small cars today, the A-Class features a turbocharged 2.0-liter four-cylinder engine. Shared with the C-Class, GLC-Class, and countless other Mercedes products, this less-powerful variant of the 2.0T is perfectly satisfactory. There's a minimal amount of turbo lag, and the engine is calm, quiet, and generally likable.

The A220’s nine-speed automatic transmission is the only gearbox Mercedes offers, but that's A-okay. It's a peach in both everyday conditions and in the friskier Sport driving mode. The composed upshifts fade into the background, even in Sport, while the amount of hunting during downshifts is forgivable. This gearbox is happiest when left in Comfort, though. There was also no discernible way to lock the gearbox into manual mode, which forced us to hit a paddle multiple times before the transmission's computers took notice. (When we switched into Sport and took hold of the wheel-mounted paddles, the transmission was barely willing to accept our inputs.)

While the A-Class has a better ride than the CLA-Class, this car would not be our first choice on Michigan's pockmarked roads. There is ample tire roar and road noise, while potholes are only partially muted in their charge into the cabin. The suspension also struggles to iron out the bumps, although it does a good job of isolating them. In other words, impacts are abundantly clear, but they don't affect the behavior of the other three wheels.

The damping of our tester felt more composed than the car we drove in Seattle, as well. Even on Detroit's rough roads, the degree of vertical motion in our 4Motion-equipped car wasn't nearly as disruptive.

Neither NHTSA nor the IIHS has crash-tested the A220 yet. Considering the A-Class carries much of the same active safety gear as Top Safety Pick Plus models like the C-Class and GLC-Class, we doubt the compact Mercedes will fail to perform. That suite of active safety equipment is neither standard nor cheap, ringing up at $2,250.

It is comprehensive, though. The A-Class carries the usual suspects like automatic emergency braking and adaptive cruise control, but it also features lane centering with steering assist. With all its systems engaged, this compact sedan borders on being semi-autonomous. In terms of safety gear, it's one of the most advanced vehicles of its size on the market.

The 2019 Mercedes-Benz A-Class returns an EPA-estimated 24 miles per gallon city, 35 mpg highway, and 28 mpg combined, which earns a 6 on our fuel economy scale. Those figures are for a front-wheel-drive model (the EPA hasn’t released standalone figures for the 4Matic). It's likely that our 4Matic-equipped tester would lose a point or two. The A220 also loses a point for requiring Premium fuel.