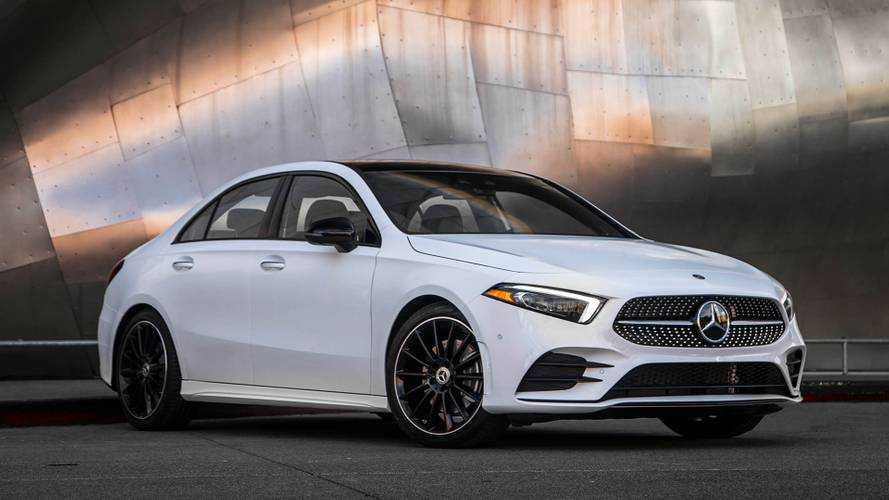 “Shut the **** up,” I shouted at the 10.3-inch touchscreen on the 2019 Mercedes-Benz A-Class. I’m tired, and jet lagged, and the frustration over a second missed turn of the day during Seattle's rush hour is the straw that broke the camel’s back. The result is me yelling at an inanimate object. Its response?

“You can't handle the truth.”

An A For Effort:

Both my co-driver and I erupt in laughter. The Mercedes-Benz A-Class and its new infotainment system, MBUX (pronounced emm-bee you-ex, not emm-bux), are like Sour Patch Kids – sour, and then slowly but surely, sweet.

A big part of the sour is something I won't cover in too much depth here – check out the dedicated list breaking down the system's features, foibles, and fascinations here. MBUX is both one of the most promising new infotainment systems and one of the most infuriating. Considering my expletive-fueled outburst, the latter point shouldn't come as a surprise. Still, there's genuinely interesting technology on display that can’t be ignored.

The headlining feature is the voice control system; one of four ways for drivers to interact with MBUX (the others include the touchscreen display, the steering wheel controls, or the trackpad on the center console). This is not your typical voice control system, though. It's capable of understanding more casual speech, so you're not stuck using predetermined phrases. It also blends a virtual-assistant-like ability to answer questions. If, like me, you want to know when the next Michigan Wolverines football game is, MBUX can tell you. Or, if you'd like to know who won the Academy Award for Best Actor in 2012, it can do that, as well. (It was Jean Dujardin, by the way.)

But getting the system to respond is too easy. See, like Amazon's Alexa or Siri, MBUX has a wake phrase – “Hey Mercedes.” But during my time behind the wheel, it responds to every utterance of the word “Mercedes,” which is problematic when the two people in the car are auto writers spending an entire week driving Mercedes products (I followed up the A-Class drive with an immediate trip to Austin for the AMG GT 4-Door). It’s this hyperactivity that leads to my earlier outburst.

Almost as sour as the infotainment? The ride, which Mercedes is keen to get right after launching its last small car with a punishing ride. The CLA-Class may look like a Mercedes, but it hardly rides like one. The engineers balanced the scales better in the A-Class. This is a small sedan that handles as a small car should while sacrificing only some of the Mercedes ride quality customers expect. And much of that sacrifice is simply unavoidable.

The A-Class rides on a mere 107.4-inch wheelbase, 1.1 inches longer than the CLA but around four inches shorter than a midsize sedan, like the Toyota Camry. Despite the increase, though, there simply isn't enough time for the front suspension to deal with a bump before the rear suspension has to do the same. The cars I drove included a number odd options, too. Each A-Class at the launch event features the AMG Line Package's lowered suspension, as well as – as if to add insult to injury – 19-inch AMG wheels with low-profile tires. Each car looks damn good, but the vehicles on hand will probably only represent a small portion of actual A-Class sales.

The bulk of A-Class sedans will ride better than the A220 and A220 4Matic cars I drove.

That's good news, because it should mean the bulk of A-Class sedans will ride better than the A220 and A220 4Matic cars I drove. To be fair, these sedans already ride far better than the old CLA-Class, but there’s still too much vertical motion on uneven roads. The A-Class porpoises its way down the road, with most of the motion coming from the rear suspension. The A-Class will offer an adaptive suspension when it arrives in showrooms, and after my experience with the lowered suspension, you may want to consider that option.

On the bends and curves of Mt. Rainier National Park, though, the A-Class and its more aggressive suspension address corners eagerly, exhibiting appropriate levels of body roll and predictable chassis behavior. The steering has good weight, offering stability at speed – the on-center dead spot is near-perfect; while you won't be making many minute adjustments, it takes but a flick of the wrist to change direction – and the kind of substance that's rare in such a small car while cornering.

Like everything else nowadays, the A-Class will feature a turbocharged 2.0-liter four-cylinder. The A220 designation on the rear decklid will be the only member of the A-Class family in the near term, although the arrival of the Mercedes-AMG A35 at the Paris Motor Show and the impending debut of the A45 gives us hope the U.S.-market A-Class will get more power.

That's important, because this little sedan could use some extra punch. The 2.0-liter turbo in the A220 is a fine thing; smooth, refined, and pleasant. But with only 188 horsepower and 221 pound-feet of torque, it's significantly less powerful than the CLA-Class (208 hp and 258 lb-ft), let alone its chief rival, the Quattro-equipped Audi A3 (220 hp and 258 lb-ft).

That difference is palpable on the road, where the A220's lower torque output means it lacks the kind of straight-line pull present in other turbo 2.0-liters. Oh sure, it can execute freeway passes and attack on-ramps with relative fervor, but the A-Class never feels as eager to do so as its rivals. Still, in normal, everyday conditions – cruising at freeway speeds, accelerating away from traffic lights – the engine is quiet and unobtrusive, traits I expect even from compact luxury cars.

The only transmission on offer is a seven-speed, dual-clutch automatic that does a good job of blending into the background. Both up- and downshifts are quick, but barely felt.

Designers were told, “If you take away a line and like it, take away another.”

Applying the “Sensual Purity” design language introduced on the CLS-Class, the A-Class boasts clean styling and minimal lines. According to Mercedes-Benz's U.S. product management boss Bernie Glaser, designers were told, “If you take away a line and like it, take away another.”

The lack of lines conspires with the short front and rear overhangs, and traditional three-box shape, of the A-Class to reveal a properly proportioned sedan. Given the exterior kit on the well-optioned test cars before me, I can’t get an idea of just how attractive this little four-door will be when the inevitable low-cost lease offers start popping up with the base 17-inch wheels, less aggressive exterior bodywork, and (probably) the hateful light-up Mercedes star.

Like the exterior, the A-Class wears Mercedes' current interior design strategy well. The twin displays that sit atop the dash, understandably, get the most attention. But it's the smaller design touches of the A-Class that truly deserve praise. The climate vents feature the same elaborate turbine-like design as the AMG GT 4-Door, while the main spokes of the steering wheel are metal and boast the same touchpads found in pricier Mercedes models such as the E- and S-Class.

The A-Class gets the same ambient lighting system as other new Mercedes products, too, and its impact on the cabin at night is hard to overstate. The A-Class feels premium during the day, but in the dark, the cabin shines with the same style and vibe of its bigger, more expensive siblings. That’s an important trait for a vehicle that people are going to buy as their first step into the far grander world of Mercedes-Benz.

The cabin feels like a Mercedes, but how much so depends on where you're sitting. The front seats are mostly fine (thankfully, the A-Class won’t use the two-piece CLA chairs). But the same can’t be said for the rear chairs. Perhaps still gun shy after the criticism of the CLA's backseat, Mercedes improves ingress and egress for the A-Class. The less aggressive roofline pairs with a lowered rear bench so that even taller passengers won't bump their head upon entry and exit, or while the A-Class bounces down the road.

But the low-mounted bench means those same tall passengers won't have enough support for their long legs once seated. For adults, the A-Class' backseat will only work for one to two-hour stints. This compromise, though, feels like a net win – the reality is that the A-Class' backseat is genuinely usable, which is more than I can say for the CLA.

The reality is that the A-Class' backseat is genuinely usable, which is more than I can say for the CLA.

Mercedes hasn't announced pricing for the 2019 A220 yet (we'll have to wait until it arrives dealers in early 2019 for that info), but the automaker did hand out prices for all the optional goodies on my test cars. There's a lot, totaling up $14,000 on the front-drive A220 I drove, and, in truth, I’d be happy with less than half of that. Grab the $2,100 Premium Package (twin 10.3-inch displays, rather than the base seven-inchers, push-button start, blind-spot monitoring, and auto-dimming mirrors), the $1,150 Multimedia Package (augmented reality camera and navigation), the $310 ambient lighting setup, and the $2,250 Driver Assistance Package (every active safety system money can buy). That kind of restraint should, if the CLA250's starting price is any indication, yield an A220 with all the important features for well under $39,000.

And while $39,000 for a small car feels high, the A-Class is worth it. It takes all of the best traits of the CLA-Class and fixes most of its worst. It's the car that Mercedes should have built years ago, as the A-Class packs world-beating technology and smart engineering, a comfortable ride, and the looks and materials of a far pricier car. If you liked the CLA-Class for its value-oriented luxury, then you'll like the 2019 Mercedes-Benz A-Class for that reason and many more.