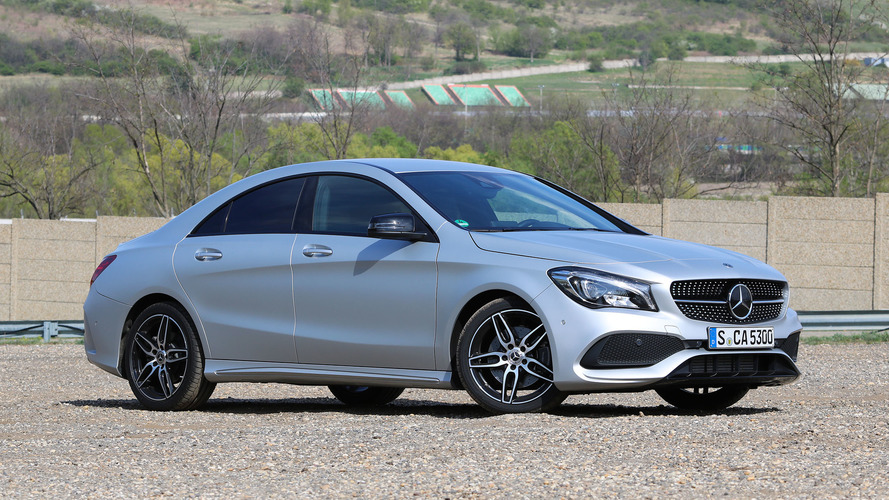 With the rough edges polished, the most affordable Mercedes no longer feels cheap.

As the most affordable car in American Mercedes showrooms, the CLA-Class has a hugely important job. It must lure in new customers who’ve never bought a Benz before, who also tend to be younger than most Mercedes drivers. Making a good impression is critical because Mercedes hopes that if the CLA is your first car with a three-pointed star, it won’t be your last.

Hence why the car’s first refresh, debuting in the U.S. as the 2017 model year CLA250, is so important. Fortunately, it looks to have been a successful update that smooths over the car’s pimples to make it an even more appealing segue into the luxury-car world.

From the curb, you won’t immediately tell that the CLA-Class is new. Sure, it has revised front and rear fascias, new wheels, the exhaust tips are more elegantly integrated into the rear bumper, and there are optional LED headlights, but for the most part the look of this four-door “coupe” is unchanged. Likewise inside, where you’ll notice new instruments with smaller, more legible numbers; new chrome trim for the switchgear; and a thinner, glass-covered display for the eight-inch infotainment system.

This is a successful update that smooths over the CLA's pimples to make it an even more appealing segue into the luxury-car world.

It’s in the back seat that the downsides of that sloping roofline become apparent. There’s more than enough leg- and knee room for me to sit behind myself (i.e. with the driver’s seat adjusted to my liking) without contorting my shins. But unless I slouch, my head presses against the headliner. Kids and average-height people will be fine, but pro basketball players should not sign up for a road trip in this vehicle. With a narrow opening and just 13.1 cubic feet of space within, the trunk is also on the cramped side. If you really value cargo space, Mercedes also sells the GLA250 hatchback.

From behind the wheel, though, you’ll notice big changes to the way the CLA250 comports itself. Mercedes says the mechanicals of the 2.0-liter turbo-four engine and seven-speed dual-clutch transmission are unchanged, but much tuning work has clearly gone on behind the scenes. The car moves off the line with the smoothness and predictability of a traditional automatic transmission, with eager throttle response. No longer does the dual-clutch lurch and clunk at low speeds; its new tuning recalls the smoothness of the powertrain in the Infiniti QX30, which shares the Benz’s engine and gearbox.

The CLA250 is still quick, with 208 horsepower and 258 pound-feet of torque, the latter quoted at 1,250 rpm on the spec sheet. On the road, though, it sometimes feels like the turbocharger’s punch arrives much later than that. Often the boost takes a while to arrive and then appears all at once, producing a less-than-linear acceleration curve.

Switch the car to Sport mode and both the throttle response and shifts firm up noticeably, especially if you use the paddle shifters. Coupled with the heavier steering weight, Sport mode allows for some genuinely engaging driving. The car follows lines through bends neatly and accurately, and while there’s practically no steering feedback, there are also no bad habits here for enthusiastic motoring.

The refreshed CLA250 is a better stepping stone than ever before into Mercedes-Benz ownership.

The suspension, too, has gone to finishing school to unlearn its predecessor’s uncouth behaviors. There’s no more crashiness over bumps or railroad crossings, though the car does feel a little floatier over crests on fast-flowing roads. Overall it drives smoothly and easily at both low and high speeds, absorbing most road imperfections handily. Front-wheel drive is still standard, with 4Matic all-wheel drive an option that will likely appeal to buyers in cold-weather states.

The main equipment change for the 2017 CLA250 is the addition of a backup camera as standard equipment, while LED headlights and a kick-to-open power trunklid are now offered as options. In general, the options list is extensive and impressive: adaptive suspension, a Harmon/Kardon sound system, 12-color ambient lighting, a panoramic sunroof, pre-collision braking, and so on. There are features from other Mercedes models not available on the CLA-Class, however. Adaptive cruise is offered, but not semi-autonomous steering tech; nor is there a touchpad for writing letters or numbers into the navigation system.

Base pricing has inched up by a few hundred dollars on the new car, to $32,400 before destination for the front-drive CLA250 and $34,400 for the 4Matic. Those are pretty reasonable entry points for Mercedes ownership, though as ever, you’ll have to pay extra to get the same equipment you can get on, say, a cheaper Honda Accord. Heated seats are part of the $2,350 Premium package, for instance, and you’ll pay $350 to unlock Apple CarPlay or Android Auto connectivity on the infotainment display. Still, this remains by far the cheapest way to get a passenger car with a three-pointed star in your driveway.

What Mercedes has done with the 2017 CLA-Class is polish the car’s rough edges. Its bad habits have been cured, its value proposition slightly improved, its essential virtues maintained. The refreshed CLA250 is a better stepping stone than ever before into Mercedes-Benz ownership, and should have no trouble attracting Millennials and Gen Xers alike who are ready to treat themselves to a luxury vehicle for the first time.