Civil and sporty on the road, tough and capable off it.

The 2019 Ford Ranger is proof that mid-sized trucks have come a long way. Remember the outgoing model? It was the definition of a work truck; tough and rugged with no fussy styling cues to get in the way. But that old workhorse is now a more modern machine. Its once-barren cabin is now beaming with tech, its thirsty naturally aspirated V6 makes way for a more-efficient turbocharged four-cylinder engine, and its styling, though subtle, is extremely modern. 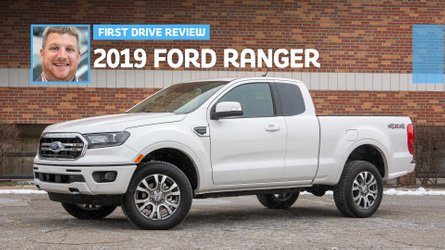 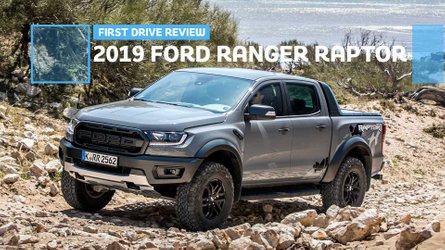 Visually, the new Ford Ranger is a far cry from its boxy sibling. Its octagonal grille and slim headlights give the Ranger a sharp-looking mug that pairs with either subtle dark grey (Sport) or classic chrome (Lariat) accents. Wheels vary from 16-inch steelies to optional 17- and 18-inch units. The latter’s off-road options almost look ripped from the F-150 Raptor, for what it’s worth.

But the new Ranger isn’t exactly eye-catching – its lines are relatively straightforward and its cues are cookie-cutter. The only thing that offsets the otherwise simple styling are the color options: Lightning Blue, Sabre (i.e. Yellow), and Hot Pepper Red Metallic are the three most appealing hues on the Ranger and help the otherwise basic design stand out.

But even without a flashy paint job, it's the proportions that make the Ranger a visually appealing truck. At 71.5 inches tall (in SuperCrew 4x4 configuration), the Ranger measures up to the class’ standards, if not exceeds them slightly. Its windshield isn't as upright, though (it rakes aggressively into the sharp roofline), and the body is two to three inches shorter than both the Toyota Tacoma and Chevrolet Colorado. At 210.8 inches, finally, someone takes the term “mid-sized” seriously.

The Ranger's compact size makes it a more likable truck on the move, too. It doesn't lumber around like the Chevy or Toyota’s offerings, or roll as dramatically as you'd expect. It drives like a much smaller vehicle: the steering rack is uncharacteristically tight and responsive, and the Sport suspension stiffens up the Ranger's ride nicely. The rear-wheel-drive XLT model is a total riot to toss around.

The rear-wheel-drive XLT model is a total riot to toss around.

Part of the truck’s fun-to-drive nature is due to the turbocharged 2.3-liter engine. It’s unflappably good, and is arguably better than any V6 in the segment. Number nerds might point out that the 270 horses aren't best in class, but the 310 pound-feet of torque is. Mash your foot on the gas pedal and all that torque punches you in the chest while the 10-speed automatic – ripped from the F-150 – quickly and decisively shifts for you. It's a really fantastic setup that helps the rear-wheel-drive model return up to 26 miles per gallon on the highway.

But there is an awful noise that penetrates the cabin – it’s somewhere between a lawnmower and a hair dryer. Ford says it artificially enhanced the sound of the engine due to customer demand, but it probably shouldn't have. And then there are the Sport package's abilities off-road – or rather, lack thereof. The tight nature of the road-tuned suspension makes it back-breaking on anything more than a sandy parking lot.

When the going gets tough, opt for the optional FX4 package instead. With an on-demand transfer case, a locking rear diff, four different drive modes (Normal; Grass, Gravel, and Snow; Mud and Ruts; Sand), and better suspension travel, trucks with the FX4 package react much differently to dirt roads. It climbs steep hills thoughtlessly, runs through deep mud puddles, and even travels up to 22 degrees on a lateral angle in our observation. One Ford engineer said he saw up to 27 degrees on the same slope. For reference, Ford also claims the Raptor gets to about 30. (Unfortunately, Ford doesn't officially publish these numbers).

The FX4 Ranger also gets Trail Control, a feature borrowed from the F-150 Raptor. Trail Control is basically cruise control for off-roading; it holds the truck at a set speed when climbing or descending, so all the driver has to do is steer. It's an awesome, hugely usable feature that keeps the truck from lurching. Though Toyota may have been one of the first to offer real off-road capability it in the segment, after testing the two side-by-side during the drive program, the Ranger perfects it.

The Ranger's cabin is very much reminiscent of other mid-sized trucks.

The Ranger's cabin is very much reminiscent of other mid-sized trucks. It’s dash and door panels are covered in hard plastics, littered with buttons, and every piece generally feels cheap. The XLT Sport only had a small semblance of nicer leather on the door panels and steering wheel, as well as upscale textures like embossed plastic on the passenger-side dash. Higher trim levels, such as the Lariat, offer nicer textures for the seats and door panels, but you still won't be able to escape the plastic-heavy dash.

If you don't opt for the eight-way adjustable leather buckets (pictured below) as part of equipment group 302A – which we highly recommend – the base units are straight-up bad. Beige and finished in a cheap-feeling cloth on the XLT Sport model, the chairs don't have nearly enough support for longer bouts. The backrests are flat and stiff, as are the headrests, and if you have long legs like this writer, there's nowhere near enough thigh support. It might sound silly to take such a hard stab at the seats, but they really do the Ranger a disservice.

The cabin has a good amount of space, at least, and the airy feel from behind the wheel might be enough to overlook what's underneath your butt. Even though the Ranger looks shrunken on the outside, it's cavernous inside. Both the four- and five-seat SuperCrew and SuperCab models get 39.8 inches of headroom and 43.1 inches of legroom up front, besting the slightly bigger Tacoma by a few inches in both respects. And the back seats are bigger than Toyota's truck too, with up to 34.5 inches of legroom. But the Colorado still bests them both (35.8 inches).

Knowing more buyers – even in this segment – are eager for tech, we welcome the optional eight-inch touchscreen infotainment system. Apple CarPlay and Android Auto connectivity come standard with the setup, and Sync 3 works surprisingly well – its cleanly laid out, easy to use, and equipped with nice graphics. The interface is a gem in the cabin’s sea of plastic. Sync 3’s navigation function, in particular, stands out. It's intuitive and responsive, with the ability to make quick decisions based on traffic patterns and accidents. Think of it as an advanced version of Apple Maps, but baked in. If you really want to save cash, Ford offers a wimpy 2.3-inch "Productivity Screen" on the base model that does none of those things.

And if you want safety, the Ranger has plenty of it. On XL trims and above, Ford offers Co-Pilot 360 as an option. It's the answer to Toyota's Safety Sense system and comes standard with features like blind-spot monitoring with rear-cross-traffic alert, lane-keep assist, automatic emergency braking, and automatic high beam headlights.

With a starting price of $24,300, the Ranger is a good deal more affordable than the Tacoma ($25,550). Options and packages can quickly hike the price, though, and while Ford doesn’t provide pricing on dealer-installed Yakima accessories, we can’t imagine they’ll be cheap. Depending on how you spec it from the factory, the Lariat model stretches all the way past the $47,000 mark, putting it firmly in F-150 territory.

But Ford shouldn’t be worried about the Ranger stealing the F-150’s shine – the Ranger has enough to lure in new buyers entirely. It’s handsome, tech-focused, and, with the available FX4 package, is one of the more competent off-road options in its class outside of range-topping trims like the Tacoma TRD Pro and Colorado ZR2. And if you’re wondering, Ford insists it won’t bring the Ranger Raptor model stateside – but we can dream.