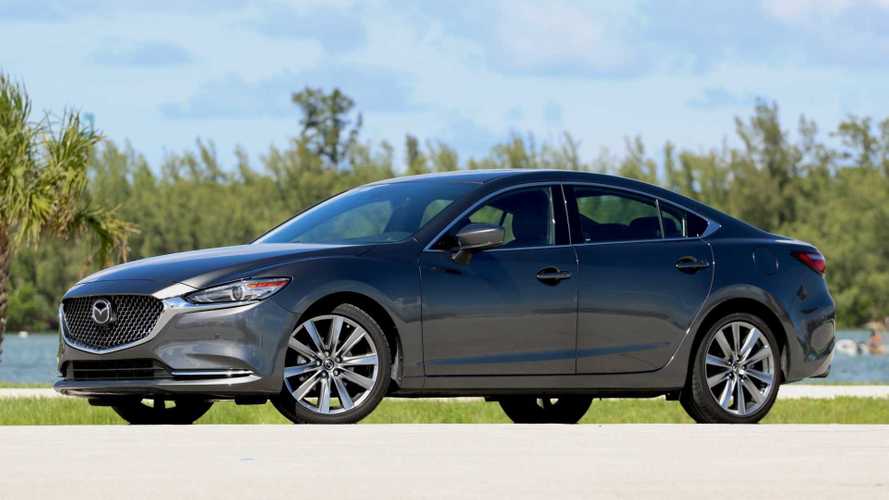 A new turbocharged engine transforms the Mazda6 from good to great.

There aren't a lot of really exciting mid-sized sedans; just some good, solid options attempting to fend off a tsunami of SUVs. But enter the new-and-lightly-improved Mazda6. It's no average mid-sizer.

2018 Honda Accord First Drive: Put Down Those SUV Keys

Instead, it borrows a few fun-to-drive cues from the Miata – sharp styling, too – and turns it all up a notch with a new turbocharged engine borrowed from the CX-9 crossover SUV. It's the “Zoom Zoom” alternative to doom and gloom.

Compared to the two closest competitors for our range-topping Mazda6 Signature – the Honda Accord Touring and Toyota Camry XSE – the Zoom-Zoom brand's sedan is the most expensive option. The Signature trim starts at $34,750, whereas the Accord Touring comes in at $33,800, and the Camry XSE at $34,050. Like its countrymen, Mazda neatly packages in a healthy number of standard features. Our tester only had $500 worth of options (premium paint and scuff plates, to be exact), which brought the total price to $36,140 (including destination). It's not the most affordable option in its class, but it didn't feel expensive given all that you get.

The Mazda6 is a very pretty car. Prettier than anything in its class, I'd argue (the Accord is a close second). But the so-called “facelift” for 2018 didn't do much to up the styling. The old horizontal grille slats are swapped for a mesh design, the new 19-inch wheels add more spokes… and that's about it. A light refresh is all this car needed, anyway. Most of the major changes are under hood.

Remove its badges, and you'd swear the Mazda6 was something more premium. For a car that costs $36,140, its interior shoots way above its price point. Lots of soft, high-quality leather trim pieces are within reach. Real Japanese Sen wood separates the upper trim of the dash from the Alcantara below. Even the door panels, finished with faux Alcantara, feel very upscale. If we had to knock one aspect of the Mazda6's interior, it'd be the iPad-style infotainment screen. It's a cheap addition to an otherwise posh cabin.

With 38.7 inches of rear legroom, the Mazda6 felt plenty spacious for my six-foot frame. It plays second fiddle only to the Nissan Altima (43.8 inches) and Honda Accord (40.4 inches). The Ford Fusion has 38.3 inches of rear leg space, and the Toyota Camry has just 38.0 inches. But if you’re at least six-feet tall like me, you'll have to avoid bumping your head on the headliner – headroom is less forgiving than in a competitor like the Accord.

If you opt for the Signature trim, as we did, a 7.0-inch gauge cluster display replaces the analog speedometer with a digital unit. It's sleeker and better integrated than other instrument clusters we've seen, and though it only shows a few simple settings – things like music and fuel economy. It's better than most analog setups.

The Mazda6's turbocharged 2.5-liter engine is one of the most powerful four-cylinders in its class. Its 250 horses (on 93-octane fuel) are second only to the Accord Sport (252 hp). But torque is where this engine shines, and all 310 pound-feet (versus the Accord's 273 lb-ft) arrive at a low 2,000 RPM. Additionally, the six-speed automatic quickly slips into the correct gear. The suspension is tight and responsive, and the steering rack is, too. The Mazda6 is an extremely competent driver – but it isn't so much a “sports sedan” as it is simply “sporty enough.”

The car meanders to 60 miles per hour in an estimated 7.2 seconds, and that instant torque I mentioned is followed quickly by a plateau in power. The front-wheel-drive Mazda6 also suffers from the uncouth clawing of its front rubber (Falken Ziex ZE001 all-seasons) when you stomp on the throttle. Its power is best saved for highway passing, rather than pedal-mashing, off-the-line aggression. It borders on luxury car status in the way that it moves – and that's not a bad thing.

The updated 6 has a few new safety systems for 2018, including adaptive cruise control with stop-and-go tech, front and rear parking sensors, lane-keep assist, and a 360-degree camera. Unlike the Accord, though, these features aren't standard on all Mazda6 trims. The Mazda I-Activesense package includes all these items atop the Sport model for just $625, but standard on all other grades.

Functionally, the 6 has one of the better safety systems out there. It proactively keeps the car centered in its lane, rather then ping-ponging it from side to side. Adaptive cruise control in stop-and-go traffic is a bit jerky, but not overly harsh, and the backup camera is one of the best we've tested. It's crystal clear and ridiculously wide. It's not as good as Honda Sensing or Nissan ProPilot systems found in the Accord and Altima, but Mazda's I-Activesense makes an admirable effort.

With its new turbocharged engine, the Mazda6 gets an EPA-rated 23 miles per gallon in the city, 31 on the highway, and 26 combined. That's actually a downgrade from the pre-facelifted model, which got 27 city, 35 highway, and 30 combined with the 2.5-liter engine and a six-speed automatic.