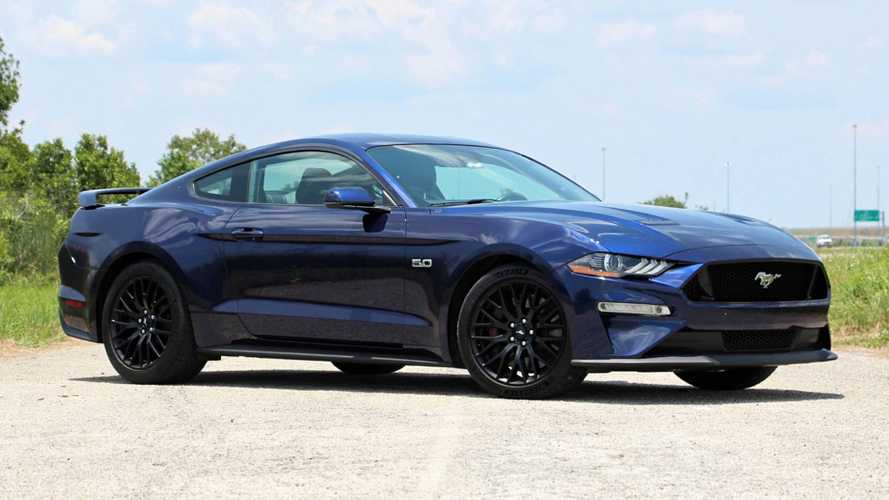 Modern cues make the Mustang GT a more appealing product, but old-school thinking still holds it back in some respects.

Bold looks and heaps of horsepower have been a  Ford Mustang calling card since the beginning. This 2018 model is no different; it gets an updated face, a reworked Coyote V8, and an optional 10-speed automatic that takes the place of the outgoing six.

The Mustang is still a fun, powerful car with mass appeal, and modern touches make it better than ever. But there are still some outdated elements that hamper the GT’s otherwise impressive performance.

The most expensive option here is the $3,995 Performance Package. It tacks on features like 19-inch aluminum wheels, Brembo brakes, unique chassis tuning, and a big ol' rear wing, among others. The 401A equipment group – a $2,200 option – adds the nifty 12-inch digital cluster display, heated steering wheel, and a voice-activated navigation system.

The MagneRide suspension is a $1,695 option, while the 10-speed automatic costs $1,595, and the Safe and Smart package (adaptive cruise control, auto high beam headlamps, lane-keep assist) is another $1,000 . If you want the active valve performance exhaust (which controls volume, depending on the setting), prepare to dish out another $895 (it’s worth it), and the enhanced security package is $395.

The rejiggered fascia isn't the Mustang's best look, honestly. The new headlights were a questionable call by designers. But you can't deny that the rest of the body is still super attractive, especially when wearing the Kona Blue paint job, black wheels, and optional wing pictured here. It catches plenty of looks from pedestrians – assuming they don’t catch wind of the front fascia first.

Wide hips and a low stance pretty much define this class, but the Mustang arguably wears the look better than any of its counterparts. The Challenger is too retro to be appealing on a mass scale, and the Camaro has a questionable facelift that doesn’t address visibility. The Mustang’s look, however, strikes that perfect balance between old school and new school.

Even with the optional MagneRide suspension ($1,695), the Mustang doesn’t score high on ride comfort. It’s a performance coupe, after all, so don’t expect luxury-car levels of damping. Not even the big, ventilated leather seats can fully mask the stiff suspension and jerky transmission. The narrow windshield isn't nearly as claustrophobic as the Camaro but still hinders visibility from the driver's seat.

The ergonomics in the cabin don’t do much to improve on comfort either. The screen was awkwardly angled and too far a reach from the driver’s seat, even for my six-foot frame. The brake pedal was located under the steering column where my right foot couldn’t reach it comfortably. And the steering wheel controls were confusing and tough to use without looking. Not to mention the volume and tuning control knobs felt cheap and plasticy.

Ford’s Sync 3 infotainment system is a big upgrade with Apple CarPlay and Android Auto compatibility, but otherwise it’s a bit outdated. The screen has poor touch sensitivity and the layout is cluttered. But the Mustang still scores high in tech thanks to its variety of optional features.

A beautiful 12.4-inch digital instrument cluster is chief among them. It's the most modern element in the cabin and configurable in a few different ways (assuming you can navigate the confusing controls). There's an analog-style gauge setting, a J-shaped digital tachometer, and a fully horizontal digital tach. Line lock also displays a fun little spinning-tire animation.

The 5.0-liter Coyote V8 has been around since 2011 (in one way or another), making it a relatively old engine. But damn does it still have it. The car pulls aggressively off the line, snapping your head back and placing pressure on your chest all the way to 60 miles per hour, which takes just 3.9 seconds. Power sits at 460 horsepower and 420 pound-feet of torque, while peak torque arrives at just 3,000 rpm.

Yes, it's silly to buy a V8-powered Mustang without a manual transmission, but it’s even sillier when your only alternative is this sub-par 10-speed automatic. Its shifts are harsh and jerky, and it fails to downshift quickly when you get on the gas. Sport+ mode reduces some of that frustration, thankfully, by sharpening up shift points and improving throttle responsiveness, but it's still slow to downshift. Paddle shifters make it easier to manage, but only just.

In Normal mode, the Mustang GT’s steering feels numb on center and too unrefined in the corners relative to its classmates. Again, Sport+ and Track mode tighten up these characteristics significantly; the steering is sharper, the MagnaRide suspension is firmer, and the transmission, as mentioned, makes more of an effort to shift quickly.

Even though it costs an extra $1,000, adaptive cruise control is a welcomed feature among muscle cars. It doesn't brake the car down to zero miles per hour in a traffic jam, but it will keeps the Mustang a good distance from the vehicle in front of it at highway speeds. It's not jerky or reactive (i.e. braking harshly), and helpful in high traffic situations.

Lane-departure warning and lane-keep assist make the Mustang even safer. The systems here aren’t perfect, but they significantly reduce the stress created by the small greenhouse and low windshield, and keep the car from getting too close to the neighboring lane. A clear backup camera with dynamic parking lines makes up for limited visibility in the rear, too.

The Mustang GT won't be winning any efficiency awards. It sits smack dab in the middle of the competitive set. At 15 miles per gallon city, 25 highway, and 18 combined, it bests the Challenger SRT (13/22/16) but falls short of the Camaro SS (17/27/20). I'm not sure buyers will be concerned about fuel economy when they're on the drag strip anyways. Premium fuel is recommended for performance but not required.