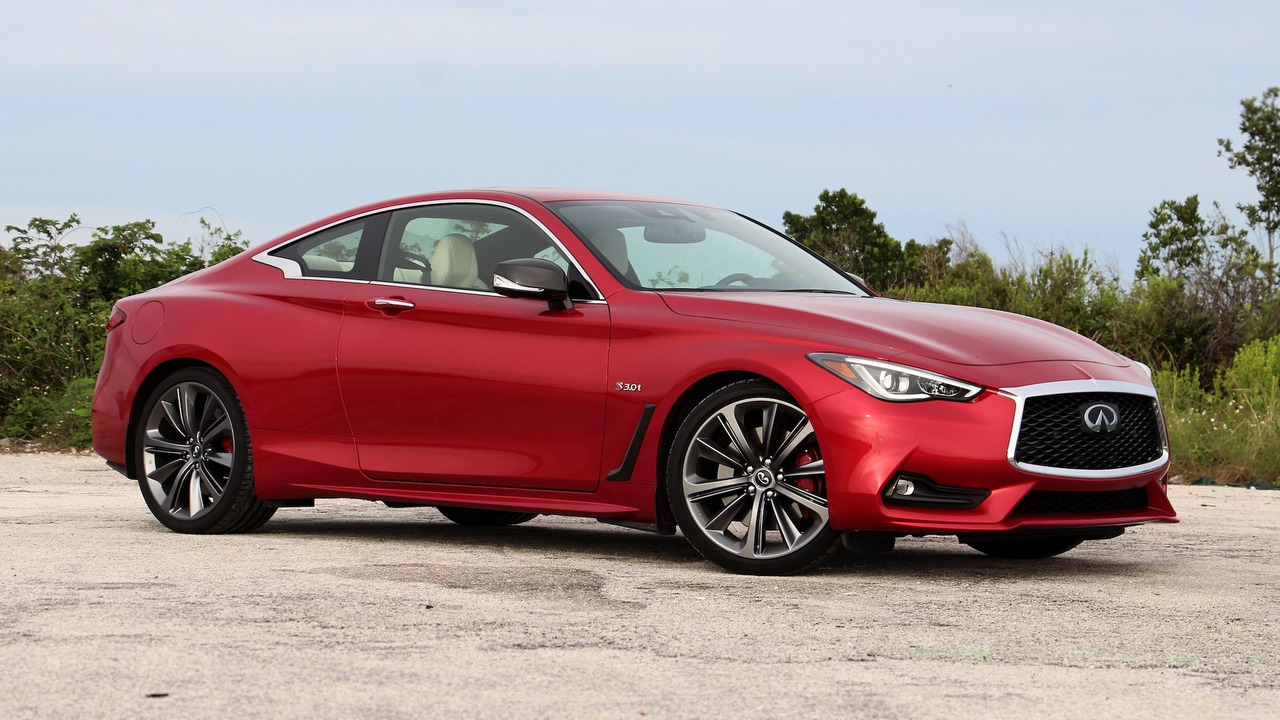 The Infiniti Q60 looks beautiful, but it still needs some fine tuning before it catches up in the performance department.

The Infiniti Q60 Red Sport is gorgeous. Drop-dead pretty. Stunning. With sultry exterior lines and a lush leather cabin, it's one of the most striking production vehicles Infiniti has ever imagined, even more so than the G37 and G35 Coupes that came before it.

Red Sport Round Up:

But there’s one problem: those good looks are writing checks the mechanicals can’t cash. Sure, the engine is punchy, and the seven-speed transmission is quick, but if you're looking for performance to match the good looks, start your search elsewhere.

Few cars I've driven earned as many compliments as the Q60 did, and it's easy to see why. Like most new Infiniti products, the Q60 has a sophisticated and well-thought out design, highlighted by bulging fenders, chrome accents on the “double-arch” grille and window surrounds, and curvy grille inserts that help draw your eye away from the otherwise ugly (but necessary for cruise control) plastic covering over the Infiniti logo.

An optional carbon fiber exterior package ($2,250) tacks on some extra aggression with a new carbon fiber lip spoiler, side skirts, and vents, while an optional Dynamic Sunstone Red paint job enhances the already elegant look. That $800 paint job is exclusive to the Red Sport trim and perfectly matches the standard red brake calipers.

Even without those add-ons, though, the Q60 is far more attractive than most of its classmates. It makes the BMW 4 Series look a decade too old when parked alongside it, and even out angles the new Audi A5 in nearly every respect. Infiniti has once again nailed it in the design department.

With optional white leather seats, a silver “optic fiber” trim on the dash and door panels, and black leather with accent stitching on the steering wheel and dash, the interior is drool worthy. The eight-way adjustable sport seats are supremely comfortable and provide plenty of legroom for both driver and passenger. The cabin has plenty of headroom, too, and is whisper quiet thanks in part to Bose Active Noise Cancellation system, standard on all models.

But the second row is cramped, even for this segment. There's only 32.4 inches of legroom, compared to the BMW 4 Series, which has 33.7 inches. Entry is difficult, even with the front seats folded all the way up, and headroom is a minuscule 34.5 inches compared to the BMW's 36.1 inches. A few inches may not seem like a lot, but they make an impact here.

The entire Q60 range comes standard with Infiniti's InTuition central control unit, which uses two screens instead of one. In this case, the top screen is reserved for the optional InTouch navigation system, while the lower screen handles HVAC systems, phone connectivity, radio controls, and other in-car features.

It's not the most refined system, though. The graphics on the top screen are outdated, and the dial controller doesn’t make much sense in this application. It’s overly sensitive and difficult to use when navigating the map, especially when on the move.

The lower touchscreen doesn't have nearly the same touch responsiveness as other more-modern setups either, and its lack of Apple CarPlay and Android Auto connectivity bring the score down significantly. Three tactile buttons for Audio, Menu, and Climate, though, help alleviate some of the overall frustration.

The biturbo 3.0-liter V6 delivers power smoothly – and most importantly – free of lag, sending 400 horses and 350 pound-feet of torque to the rear wheels via a 7-speed automatic (an all-wheel-drive option is available). The Q60 Red Sport is genuinely powerful in a straight line, even in its Standard drive setting. Infiniti clocks the coupe at 4.5 seconds to 60. Pop it into Sport or Sport+ mode for a little extra sauce on top; the two modes improve throttle response and sharpen up shift points. A Personal mode is also available that allows drivers to adjust the respective systems, including the steering and suspension, independently of each other.

The Q60's adaptive suspension system puts more of an emphasis on comfort than handling, but is still competent enough to keep the car planted and crisp in the corners at speed.

The drive-by-wire steering – or what Infiniti calls Direct Adaptive Steering – is less appealing. Unlike most cars, there's no direct connection between the steering column and the front axle. While Infiniti says this technology will be crucial when autonomous vehicles start to become the norm, it's not something we want on today's 400-hp sport coupe. DAS is light and lifeless, and doesn’t provide any feedback from the road. It’s especially egregious at higher speeds, where the vehicle wanders around aimlessly in the lane with a completely dead on-center feel. There is some adjustability in the system that allows drivers to add more heft, but this yields minimal improvement.

The Q60 Red Sport doesn’t offer even simple safety features like lane departure warning or forward collision warning standard, which gives it low marks on availability of standard equipment. Thankfully, there are two well-equipped optional packages to choose from.

The safety systems are advanced, especially for this segment, and definitely useful for a vehicle with sub-par visibility. A large backup camera with dynamic parking lines essentially take the place of the tiny rear window, and the lane departure features alleviate the stress of attempting to visually navigate the small greenhouse and poorly placed B-pillar.

The previously mentioned ProAssist and ProActive packages add $2,250 and $2,850 onto the asking price, and due to Infiniti’s nested pricing structure, each require the Sensory Technology package to go along with it, another $2,250. The carbon fiber trim package is another $2,250, the exclusive Dynamic Sunstone Red paint job is another $800, and illuminated kick plates are an extra $400.

With all that’s mentioned, plus $905 for destination and handling, you’ll be staring down the barrel of a $63,705 asking price. That’s only a few thousand dollars away from a BMW M4.