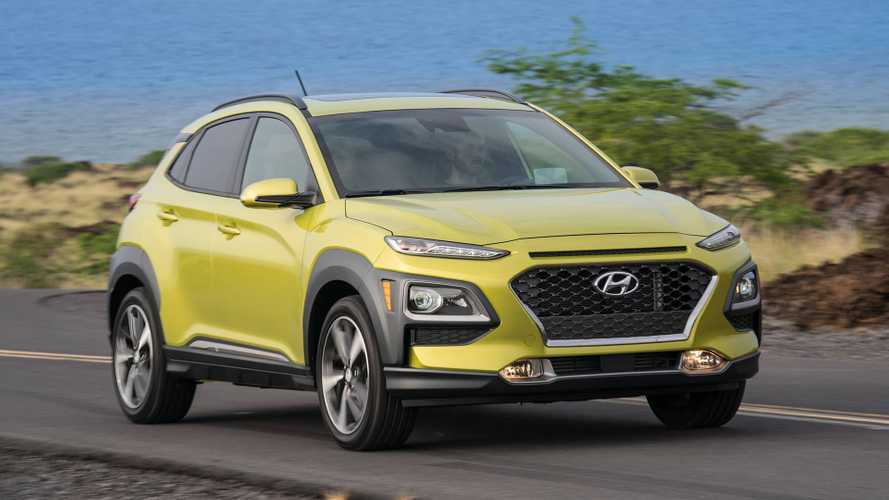 Hyundai’s take on the tiny-SUV class requires fewer compromises than its rivals.

The burgeoning number of tiny crossovers on the market are all very different, and so far, each of them has had an equal number of cons as pros. Some are incredibly spacious but deathly bland to drive. Others look fabulous but offer almost no interior space. And some don’t even offer all-wheel drive, inexplicably alienating Snowbelt buyers. So after two days at the wheel of the 2018 Hyundai Kona, the newest entry in this class, it’s refreshing that there’s no obvious way in which it forces buyers to compromise.

For starters, the design is pretty cool both outside and in. Don’t call it weird, call it different: with multi-tiered lighting elements, huge amounts of plastic cladding, and a sporty “rip-curl” C-pillar, it’s got plenty of Instagram appeal. The front overhang is notably longer than the rear one, which Hyundai Design Center Senior Chief Designer Chris Chapman says prevents the car from looking too small on the road. He likens the jagged, opposed diagonal lines on the body sides to the unpredictable flows of lava, and even further stretches belief by linking that to the “urban adventure” lifestyle of potential buyers.

“There’s a certain kind of unpredictability to the way these people [Millennials] live their lives,” he says. “These lines were to represent these sorts of changes in direction in their daily living.”

Regardless, the Hyundai Kona has far more personality than other small crossovers (e.g. Honda HR-V), without looking like it was sourced from a 12-year-old’s sketchbook (e.g. Toyota C-HR). The Kona looks best in white, blue, green, or red, as the black cladding stands out and highlights the slightly rugged theme; it’s very sophisticated in black or gray, but loses some of the funkiness.

The inside is a little more traditional, with a sensible layout familiar from other recent Hyundai models. The touchscreen sits atop the dash, tablet-style; technology highlights include an optional color head-up display and wireless phone charging. All the switches and plastics are par for the course for this price range of cars: nothing particularly special, but nicely grained and pleasant enough to the eye and touch. You can also option for a handful of lime-green accents through the cabin. Rather than garish, they look fun, nicely spicing up the interior panels.

The Hyundai Kona has far more personality than other small crossovers, without looking like it was sourced from a 12-year-old’s sketchbook.

There’s lots of space in the front seats, though the rears feel a little cramped for an adult – not necessarily any more cramped than other subcompact crossovers, but certainly a little tight for long journeys. You’ll also find lots of room to store your belongings. Cargo space ratings of 19.2 cubic feet seats-up and 45.8 cubic feet with them down are above average for the class. There’s also a divider for hiding smaller items beneath the trunk floor, and Hyundai even manages to fit a spare tire down there, too – something that’s becoming increasingly rare on cars of all sizes. Need to carry your bulky active-lifestyle gear? Roof rails are standard on all but the base SE trim level.

The next thing in the Kona’s favor is that it’s pretty nice to drive. Though a 2.0-liter inline four-cylinder engine with 147 horsepower is standard, I drove the upgrade turbocharged 1.6-liter, which delivers 175 hp and 195 pound-feet of torque. (Hyundai only offered up the turbo mills because our drive route took us as high as 6,000 feet of elevation, where turbo engines struggle less than naturally aspirated ones.) It’s mated to a seven-speed dual-clutch transmission that does a remarkable job of acting like a regular automatic; only a few times do I detect the stumbles and lurches that are endemic to affordable DCTs.

Your engine choice will depend, in part, on which trim level you buy: the 2.0-liter comes only on the SE and SEL models, while the turbo engine is standard on the better-equipped and pricier Limited and Ultimate. As Hyundai expects the SEL trim to account for more than half of all sales, that 2.0-liter will be by far the volume engine. We hope to drive it at a later date.

The turbo engine, for now, delivers just the right amount of punch for the Kona’s size and weight, accelerating confidently and easily. Even passing on a two-lane road is a breeze, with peak torque available from 1,500 all the way to 4,500 rpm. Though as revs build, the engine’s sound is not particularly sonorous.

Even aside from the powertrain, the Kona drives with a refreshing maturity: more like a shrunken larger car than a bulked-up small one. The suspension keeps body motions in check on winding and undulating roads, and toes the line between being stiff and pliant over rough ones. There’s not too much floatiness, and the electric power steering delivers generous weighting and realism as you turn in and out of bends. The controls, ultimately, all feel just-right: the brake pedal, the throttle response, and the steering are well-judged.

It drives with a refreshing maturity: more like a shrunken larger car than a bulked-up small one.

The few times I manage to carry speed through twisty roads, the Kona at least doesn’t throw its hands up in surrender: to call it sporty would be a stretch, but it’s much more confident when cornering than I’ve come to expect from tiny crossovers. The car’s computers even gently brake the inside wheel in turns to provide a mild torque-vectoring effect that, Hyundai says, makes the car feel more natural in bends.

The optional all-wheel-drive system by default sends all its power to the front wheels but can shift up to 50 percent rearward in case of wheel spin. Unusually for a car like this, there’s even a switch to lock the AWD in its 50:50 split (e.g. for extricating yourself from snow or sand) and hill-descent control. But with 6.7 inches of rated ground clearance, it’s hard to picture any Kona owners tackling anything more off-road-y than a gravel road.

Despite all its good characteristics, both wind and road noise are readily apparent inside the Kona, even at sub-highway speeds (the highest speed limit I saw during my drive was 55 miles per hour). The steering is too heavy at low speeds; three-point turns feel more of a chore than suits a daily-driver car like this. And on-center at high speeds, there’s a tiny bit of vagueness in the steering that would be tiresome over multi-hour highway journeys.

As the Kona is aimed, like so many new cars, at Millennials, Hyundai emphasizes that the Kona has a strong value-for-money play. It starts at $19,500 before destination, while the top trim level with all-wheel drive lists for $28,700. That’s competitive within the class. More importantly, Hyundai worked to make sure that you don’t have to climb too high on that price ladder to get lots of features.

That means that standard equipment on the entry SE model includes the 7-inch touchscreen radio with Apple CarPlay/Android Auto, 16-inch wheels, LED running lights, keyless entry, and cruise control (remarkably, not all those things are standard on all the Kona’s rivals). Moving up to the $21,150 SEL adds 17-inch wheels, blind-spot warning, push-button start, roof rails, and heated seats; a $1,500 Tech package builds on that with a sunroof, pre-collision braking, lane-keep assist, and a driver-attention warning. For my money, the SEL Tech is probably the trim to get.

The best thing about the 2018 Hyundai Kona is that it’s tough to find a downside.

Speaking of affordability, gas bills should be relatively reasonable. EPA ratings with the base engine are 27 miles per gallon city and 33 highway with front-wheel drive, or 25/30 mpg with all-wheel drive. There isn’t much of a penalty to pay for going turbo, either, with EPA figures of 28/32 mpg with front-drive and 26/29 mpg with AWD.

The best thing about the 2018 Hyundai Kona is that it’s tough to find a downside. Compared to its rivals, it drives well, it offers a good selection of features, its styling is appealing, and its pricing structure is very competitive. If you’re out having active-lifestyle adventures every day, the Kona will be the perfect partner. And even if you’re not, it’s a competent and highly likable crossover.