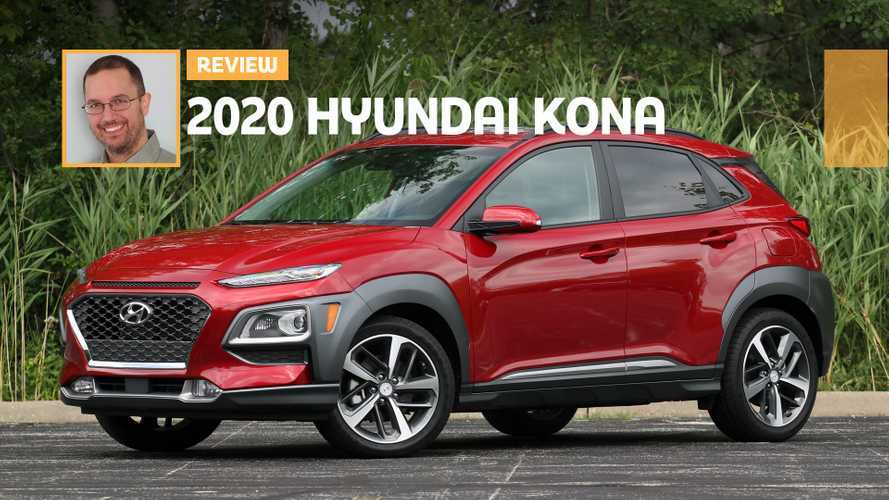 The Kona needs work, but still offers impressive features that make it worth a look.

Hyundai has gone on an SUV blitz. For 2020, the South Korean automaker will have six different SUVs in its lineup, ranging from the exceptionally small and cute Venue to the impressively large and in charge Palisade.

The 2019 Hyundai Kona is one size above the Venue and considered subcompact in size. The relatively new nameplate (2018 was its first model year) has joined an ultra-crowded and competitive segment where vehicles like the Honda HR-V, Subaru Crosstrek, and cross-country rival Kia Soul have dominated.

What the Kona offers is unique, though polarizing, styling and an impressive cabal of safety features that are tough to match. It also flubs some of the fundamentals that its competitors get right.

Is it a worthy addition to Hyundai’s crowded selection of crossovers, or should you seek satisfaction outside the brand?

Design is always subjective, so you may not agree with the middling score we’ve given the Kona in this category. Truth be told, we applaud Hyundai and its designers for making the Kona look unique. While the design is interesting, it’s also busy, with a lot of intakes and vents that go nowhere and do nothing.

For instance, the horizontal line above the main grille that appears to be an intake is just for show and allows no air through. The “body cladding” around the Kona’s lower half, which the designers use effectively to project a rough-and-tumble image, is actually painted like the rest of the body panels and will suffer scrapes and scratches just the same, as opposed to typical body cladding that’s unpainted dark plastic and meant to take abuse that would damage paint. At least, that’s what we see on the Ultimate trim, and it’s also this way on the Iron Man edition.

It’s like Hyundai’s designers took many of today’s cliched styling cues and collected them on the Kona. It’s got the separated low- and high-beam lights from the Juke, the busy lines of the CH-R, the ultra-short rear overhang of the Crosstrek, and the floating roof effect from so many SUVs on sale today. Altogether, it’s a little much.

The Kona’s interior, though, is executed in typical Korean fashion, which is to say very well. The screens are large, the materials feel above average in quality, and the design is functional and aesthetically neutral. The three highest trims – the Limited, Ultimate, and Iron Man Edition – all get standard leather seating, as well.

The Kona scored poorly in this category for two reasons: rear seat legroom and overall cargo capacity. Besides those two things, the Kona is a reasonably comfortable vehicle, particularly for front seat passengers. The cabin does allow a fair amount of noise to enter, particularly from the engine bay, but that’s a common fault of affordable SUVs like these.

Subcompact SUVs aren’t known for having lots of rear legroom, but the Kona is in the bottom half of the segment here. Compare its measurement of 34.6 inches to the 36.5 and 39.3 inches available in the back seat of the Subaru Crosstrek and Honda HR-V, respectively. The Kona’s rear headroom is more competitive at 37.8 inches, but still falls behind the Crosstrek at 38.0 inches, the HR-V at 38.3 inches, and the voluminous Kia Soul at 39.6 inches.

Likewise, the Kona’s cargo area is on the small side. With the rear seats up, 19.2 cubic feet of space is available, and when the rear seats are folded, only 45.8 cubes are available. Again, compare that to something like the HR-V, which offers 23.2 and 55.9 cubic feet of cargo space, respectively. Again, the Soul tops all with a maximum cargo measurement of 61.3 cu-ft.

Korean automakers are well known for offering highly competent infotainment tech in their cars, and the Kona is no exception. While lesser trims get a 7.0-inch touchscreen infotainment display with no navigation, the Ultimate (and even higher-spec Iron Man Edition) get an 8.0-inch touchscreen with navigation. Powering the screen is the latest version of Hyundai’s Blue Link infotainment software, which, while not bringing much new to the table, nails the basics such as having fast response times, good-looking graphics, and easy-to-navigate menus.

The Kona Ultimate, though, is well configured with tech beyond just its infotainment system. Of course, Apple CarPlay and Android Auto are present, but the Ultimate also comes standard with a 4.2-inch color information display between its gauges, a head-up display (the kind that raises a small acrylic panel ahead of the driver on which to project information), wireless smartphone charging, and an upgraded Infinity audio system with eight speakers.

We don’t set a high bar for vehicles like this in regards to performance and handling. Really, all an economical subcompact crossover SUV needs to be fun to drive is a competent suspension, willing powertrain, and quick and accurate steering. Unfortunately, the Kona lacks at least two out of three.

The Kona’s biggest issue is its handling due to suspension tuning that lacks both firmness and control. It’s not just that the springs feel soft and there’s body roll, which they are and there is, but also that the rebound from suspension movement lacks control. Perhaps the suspension’s damping isn’t strong enough, because often times it felt unsettled after big body movements like hard turns and stops.

The Kona’s turbocharged 1.6-liter four-cylinder engine produces 175 horsepower and 195 pound-feet of torque. That’s enough power to make this 3,062-pound small SUV feel on the faster side of the segment. Yes, it’s faster than it is slow, but not quick. For that, it would need the turbo 1.6 from its corporate cousin, the Kia Soul, which produces more than 200 hp.

Nevertheless, it’s not the Kona’s engine that gets in the way of fun, but rather its seven-speed dual-clutch transmission. This transmission lacks refinement, especially starting from a stop, like at a stoplight, or shifting from Reverse to Drive. A twitchiness and jerk occurs in situations like these that genuinely had us wondering if there were a problem with the transmission.

All that said, performance and handling generally aren’t high on the list of must-haves for people who shop little SUVs like the Kona. For those without the ability to discern well- from great-handling vehicles, the Kona’s driving dynamics will likely go unnoticed.

The Kona has remarkable safety bona fides for a vehicle that starts under $20,000, and they’re even better on a fully loaded example like this Ultimate. For starters, it earns the highest possible crash test ratings from both the government-backed National Highway Traffic Safety Administration and the private Insurance Institute for Highway Safety. The Kona earns a full five-star overall rating on the NHTSA battery of tests and a coveted Top Safety Pick+ rating from the IIHS. The latter is particularly impressive, as IIHS included a new, extra stringent requirement for high-quality forward lighting, which some vehicles costing twice as much as the Kona don’t meet.

Next, all of the Kona’s trim levels come with advanced safety technology such as lane-keeping assist and automatic emergency braking. Excluding the base SE trim level, the rest of the Kona lineup also gets blind-spot monitoring and rear-cross-traffic alert systems as standard equipment. And finally, our top-of-the-line Ultimate tester adds pedestrian detection, parking sensors, LED headlights (also standard on the Limited), and automatic high-beam headlights. Again, this sort of cocoon of safety isn’t common on economical vehicles like the Kona, and Hyundai has set the bar high for its competitors.

The Kona’s combined fuel economy, as rated by the Environmental Protection Agency, is 30 miles per gallon. Along with a city rating of 28 mpg and a highway rating of 32 mpg, Hyundai’s little crossover does just well enough to earn a high score in this category. That said, if our tester had Hyundai’s optional all-wheel-drive system for an extra $1,400, its combined rating would drop to just 27 mpg, and its score in this category along with it. At 30 mpg combined, though, the Kona’s fuel economy with front-wheel drive is average among its competitors.

The Kona’s starting price of $18,990 puts it among the least expensive subcompact crossover SUVs in its class. Only the Nissan Kicks at $18,640 and Kia Soul at $17,490 have lower starting prices.

That said, one can easily spend a whole lot on a Kona. Our Kona Ultimate tester has an as-tested price of $28,680, for instance. Adding all-wheel drive would raise its price, with destination charges included, to $29,995.

There’s an even more expensive version of the Kona called the Iron Man Edition. No, it doesn’t have anything to do with Iron Man competitions. Rather, its aesthetic is modeled after Marvel’s Iron Man superhero character. While normally these sorts of pop culture tie-ins aren’t worth the money, your author is a huge Marvel fan and would totally rock a Kona Iron Man Edition. Would he pay $33,045 out the door for an all-wheel-drive version, though? That’s an astronomical price for an SUV this size, so probably not. Better to wait for it on the used market.