Finally, a fast SUV that actually makes you feel all tingly.

After falling head over heels for the Giulia Quadrifoglio, Alfa Romeo’s scorcher of a sports sedan, it was reasonable to wonder whether I’d be a little less thrilled by the SUV version. After all, the Stelvio Quadrifoglio is 10.2 inches taller and weighs 477 pounds more than the four-door sedan on which it’s based. But the good news is that from behind the wheel, not a bit of Quadrifoglio magic has been lost in the transition from sedan to SUV.

That’s due in part to the fact that, beneath the bodywork, the Stelvio Quadrifoglio is almost mechanically identical to the Giulia. One big change is the addition of all-wheel drive, though the system operates as a rear-wheel-drive car the majority of the time, only shuffling power – up to 60 percent of it – to the front wheels if things get slippery. To fit the front differential in the Stelvio’s engine bay, Alfa engineers had to relocate the 2.9-liter V6 engine’s two turbochargers slightly compared to the layout in the Giulia. But power ratings are the same: 505 horsepower at 6,500 rpm and 443 pound-feet of torque from just 2,500 rpm. An eight-speed automatic provides gear-swapping duties. 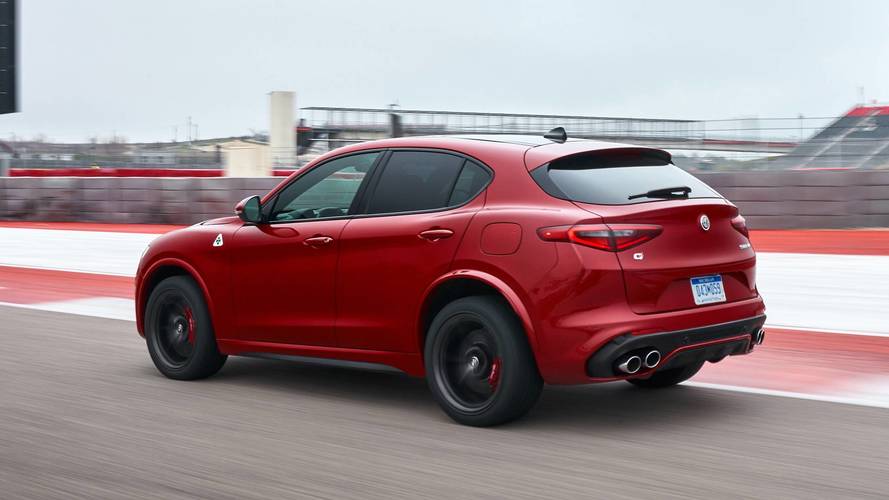 Alfa had originally promised that the Stelvio Quadrifoglio would reach 60 miles per hour in 3.9 seconds, but some last-minute tinkering with the software for the traction control and AWD system now has that figure down to a claimed 3.6 seconds – beating the Giulia Quadrifoglio’s claimed 3.8-second sprint and only one-tenth behind the mighty, 707-hp Jeep Trackhawk. But, owing to its considerably different aerodynamics, the Stelvio tops out at 176 mph to the Giulia’s 191.

Even when you’re not driving at anything close to those figures, the Stelvio Quadrifoglio feels lively and energetic. The engine is a delight, with a hurried rush of power and explosive torque available at a moment’s notice. The exhausts trumpet, rasp, and snarl; I slow down, accelerate hard, and lift, just to hear the entire performance one more time. Fortunately, if you leave the drive-mode selector in Natural or Advanced Efficiency, things remain somewhat quieter. But noises escalate in Dynamic and become even more thrilling in Race.

The furious acceleration and sound are the appetizer for an entree of thrilling corner-carving. With a quick 12.0:1 ratio and lots of feedback, the electric power steering comes alive in my hands. There’s a little bit of dartiness at highway speeds, sure, but when I turn onto winding back roads, the quickness makes the Stelvio feel light on its feet. The stiffened suspension springs and adaptive dampers might telegraph every road imperfection to your butt, but they also do a remarkable job of keeping the Stelvio flat and composed through twisty stuff. Grippy Pirelli P Zero tires mounted on 20-inch wheels (9-inches wide in front, 10-inches wide in back) are practically unflappable on the street.

The Quadrifoglio’s track prowess was already borne out by the record-setting 7 minutes, 51.7-second lap at the Nürburgring, but I’m more than happy to double-check its abilities on Circuit of the Americas. The expansive 3.4-mile track outside Austin, Texas, is big enough that I see more than 130 mph before braking zones, while the myriad different corners highlight that it’s just as good going fast as it is slowly. 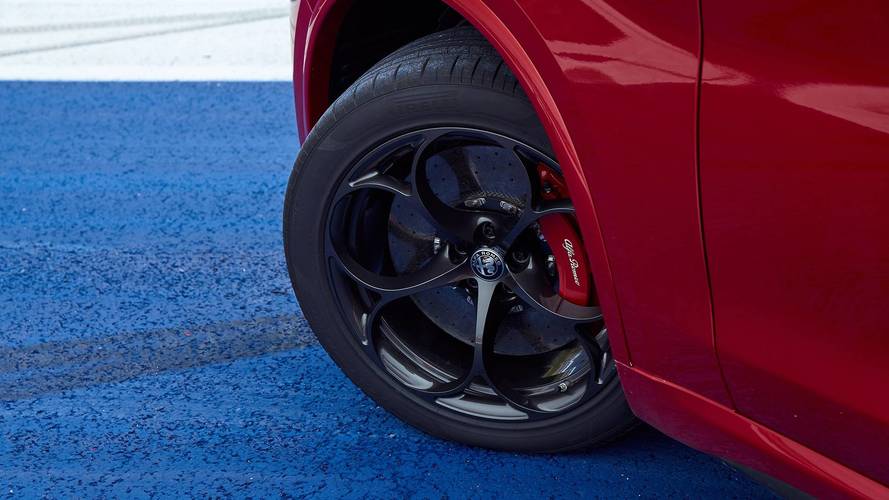 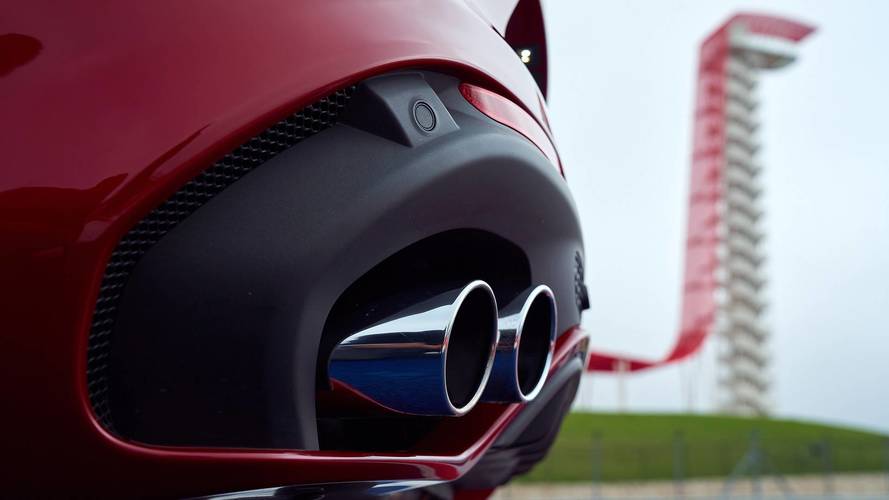 In short: thrashing the Quadrifoglio is extremely rewarding because its limits are very high. I lean on the sticky tires through high-speed corners, relish the quick steering when carving into slow hairpins, and devour straights with the biturbo engine roaring. There’s a lovely balance through corners and lots of adjustability if you modulate the throttle; the Quadrifoglio toes the line between thrilling and challenging. The no-fuss shifters do exactly what I ask with prompt, snappy gearchanges accented by triumphant blats from out back.

And for as incredible as it sounds inside, exhausts trumpeting and snarling, it’s even better as a spectator on the sidelines. Few turbocharged SUVs are this vocal or this eager to run around a race track. For maximum track work, you can even option some ultra-cool Sparco carbon-fiber bucket seats – though they are manual-adjust only with no heating option.

Deceleration is handled by Brembo brakes all round, with 14.2-inch rotors up front and 13.8-inch ones in the back as standard. Optional is a carbon-ceramic Brembo package with larger brakes (15.4/14.2 inches) that are, nonetheless, lighter than the standard steel ones.

As on the Giulia and other Stelvios, the Quadrifoglio uses a brake-by-wire system that, according to chief engineer Andrea Zizak, is both lighter than a conventional braking system and allows for more effective ABS, stability control, and pre-collision braking intervention. But for track use it has two interesting characteristics. First, there’s no pedal kick-back when the ABS activates, so you must watch for the yellow “ABS Active” reading in the dash. Second, because the brake pedal is really just commanding an electronic solenoid, it doesn’t travel more as the brake system gets toasty. Instead you see a “Brakes Overheated, Drive Slowly” warning if track-day hot-lapping is taking its toll. 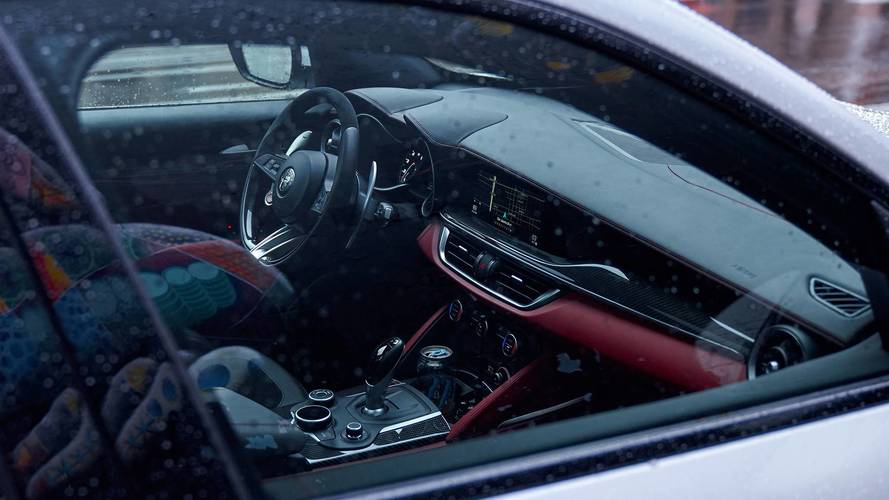 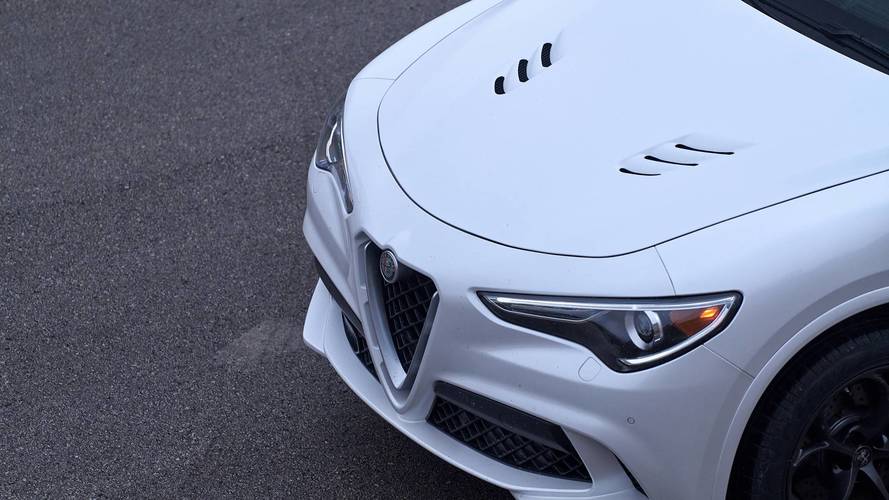 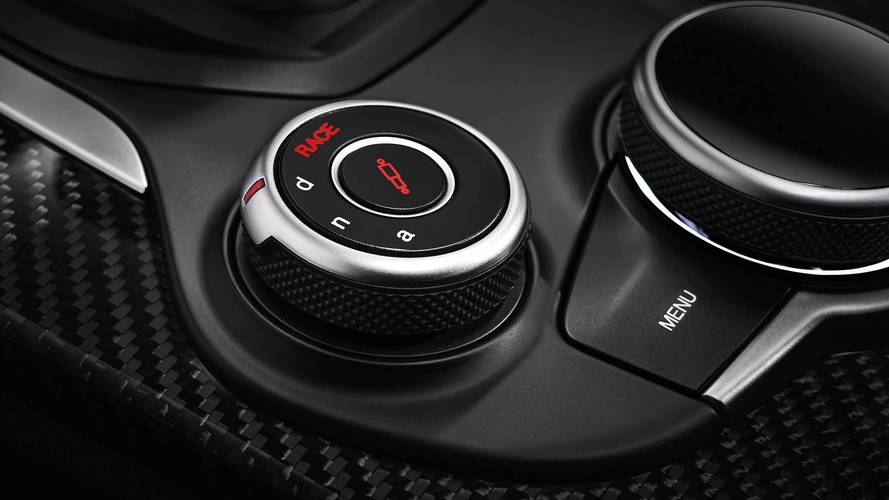 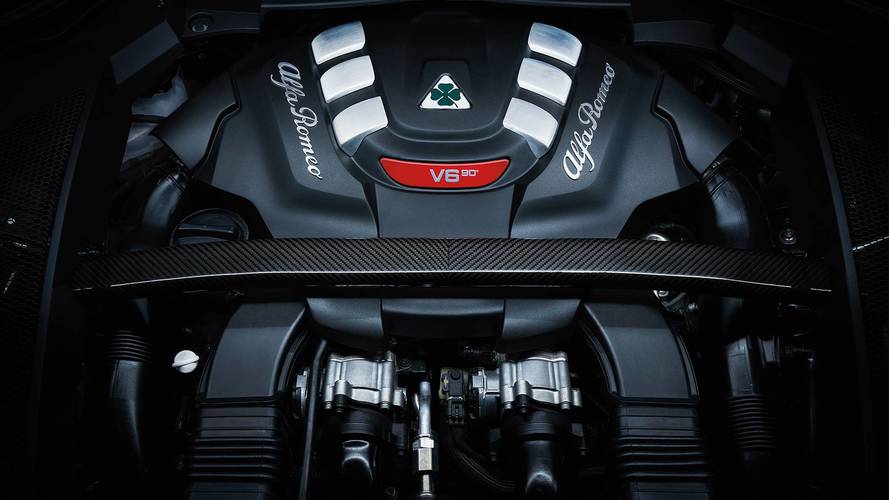 Interior adornments include snug-but-comfy bolstered seats with heating and powered bolster adjustments, copious carbon-fiber trim, Alcantara, red stitching, and massive real-aluminum shift paddles. An 8.8-inch infotainment system with navigation comes standard. It now supports Apple CarPlay and Android Auto as standard, neither of which was available when the Stelvio first launched. A color trip computer lives between the analog gauges. Plus you’ll find three USB ports and a sole 12-volt outlet to keep your gadgets charged.

On the outside, the only “Quadrifoglio” identifiers are two four-leaf clover badges, one on each front fender; the liftgate says just “Stelvio.” But it’s pretty easy to tell this is not your standard 280-hp Stelvio: note the functional vents in the hood, the more aggressive front fascia, big exhaust tips, deep side skirts, and 20-inch wheels. Though the Stelvio Quadrifoglio does have a carbon-fiber driveshaft, it lacks the active aerodynamics and carbon roof panel of the Giulia. In exchange for the latter, though, you do get a big panoramic sunroof.

Are there negatives? Sure. Those lovely aluminum shift paddles are so large they obstruct your reach for the turn signals and wiper controls. The rear seat backrest is a little too upright and stiff for long-term comfort. Even in the most forgiving setting, the ride is decidedly stiff. And as in the Giulia Quadrifoglio, some more flexibility in the drive-mode selector would be nice: The loudest exhaust noises are reserved for Race mode, but that disables the stability control and sets the dampers to their firmest setting – hardly ideal for road driving. I’d be happier if there were an option to get the more vocal sounds in Dynamic mode.

Because it’s an SUV, the Stelvio Quadrifoglio offers a fair bit more practicality than its sedan sibling. There’s more headroom front and rear, plus a more generous cargo area that accommodates 18.5 cubic feet with the seats up and an impressive 56.5 with them down. Compare that to just 13.0 cubes in a Giulia sedan’s trunk. 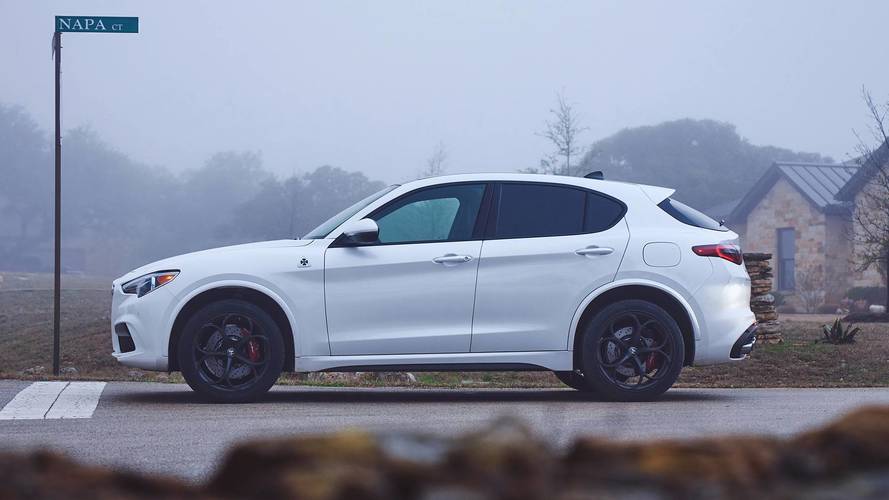 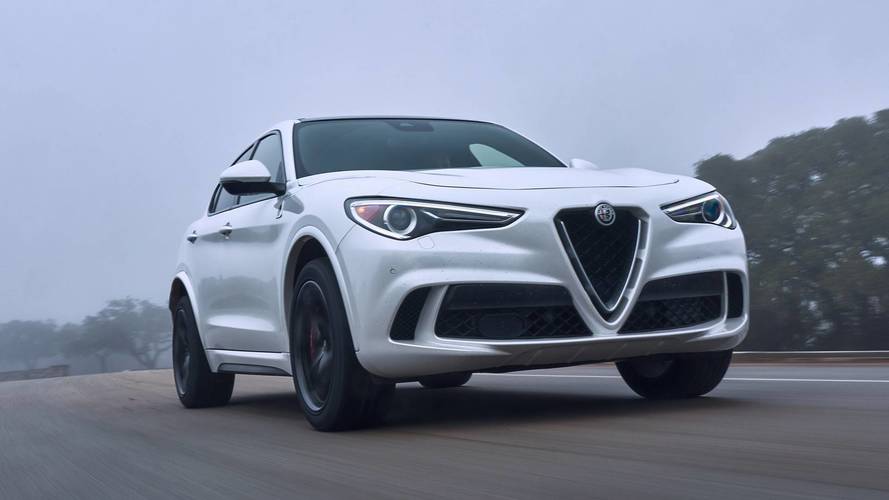 Fuel economy ratings of 17 miles per gallon city and 23 mpg highway are respectable for an SUV with 505 hp, matching a 440-hp Porsche Macan Turbo’s 17/23 mpg rating. Those figures are boosted, in part, by standard engine stop-start (with a button to disable it), plus the engine can operate on just one bank of three cylinders in low-load situations.

Unfortunately, you won’t be able to tow – at least not initially. Though other Stelvios can pull 3,000 pounds, the Quadrifoglio is not currently rated to tow because of how the exhaust is routed behind the rear axle. But an Alfa official hints that could be subject to change because, “We know what Americans expect in terms of towing.”

Pricing begins at $79,995 before destination charges or options, and it comes pretty much loaded with things that are optional on other Stelvio trim levels. My test car rang in at $85,890, thanks to the addition of things like the Driver Assist Dynamic Plus package (adaptive cruise, pre-collision warning, blind-spot monitoring), a $400 carbon fiber steering wheel, and some other minor add-ons like a cargo net. Of course, when you look at the competitive set – the likes of the Porsche Macan Turbo, for instance – those kinds of price tags are par for the course.

And ultimately, it’s a price worth paying for the fun that you get. Whether you’re taking it to a track or just driving it on public roads, the Alfa Romeo Stelvio Quadrifoglio is one of the few performance SUVs that will excite you all the time. From its raucous exhaust note to its lively steering, and from its sultry bodywork to its eager chassis, this is an SUV to covet.