A number of key improvements keep the CR-V at the head of its class.

The last time Motor1 tested a Honda CR-V, senior editor Jake Holmes succinctly summed up my thoughts: this may not be the crossover I always want to drive, but it’s the one I find myself recommending more than the others. It’s your typical, good-all-over Honda – roomy and functional, nicely screwed together, pretty efficient, and priced right. Do I enjoy the driving experience of a Mazda CX-5 a little more? Sure. But there just aren’t any big faults with the overall CR-V package. That goes for this new, 2017 model, as well.

This fifth-generation CR-V comes to market at a time when the model’s sales are stronger than ever. The CR-V’s best year was 2015, and 2016 is on pace to be even better. That’s why Honda played it safe for its big updo – don’t fix what isn’t broken, and just enhance a number of key areas. It works, too. This new model is better to drive, more comfortable to sit in, and offers more onboard technology. As one Honda executive tells me, “It does for CR-V what Civic did for Civic.” 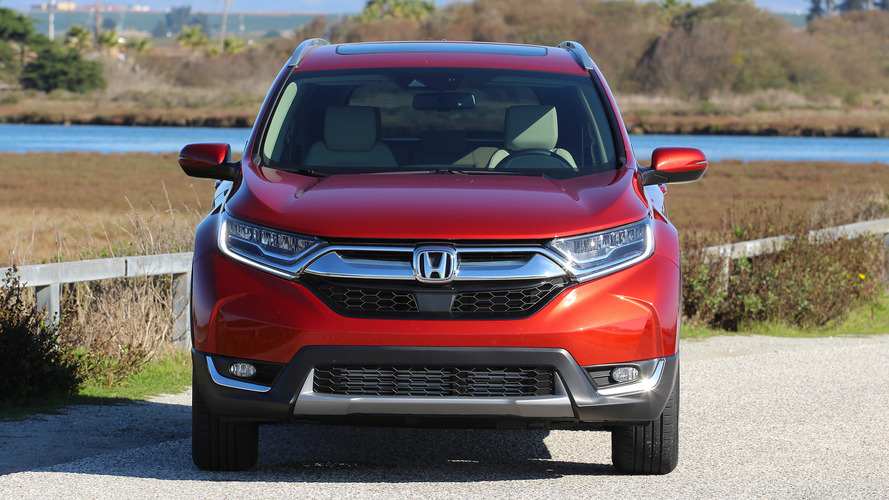 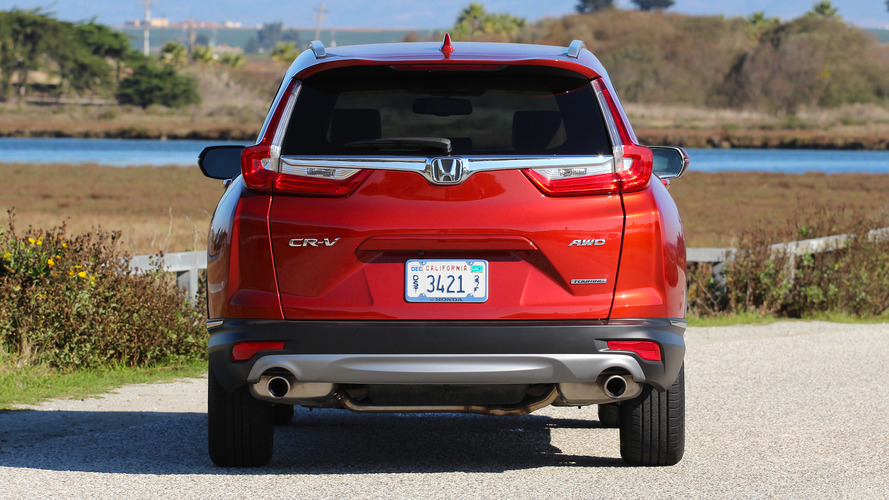 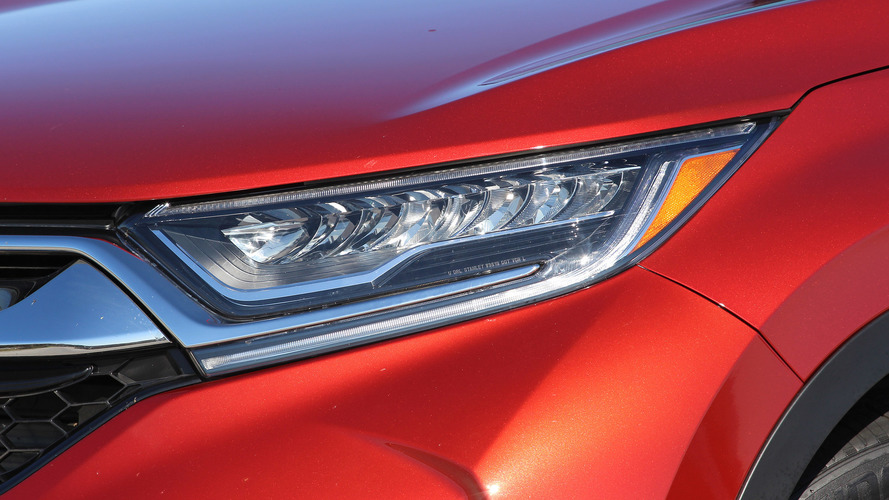 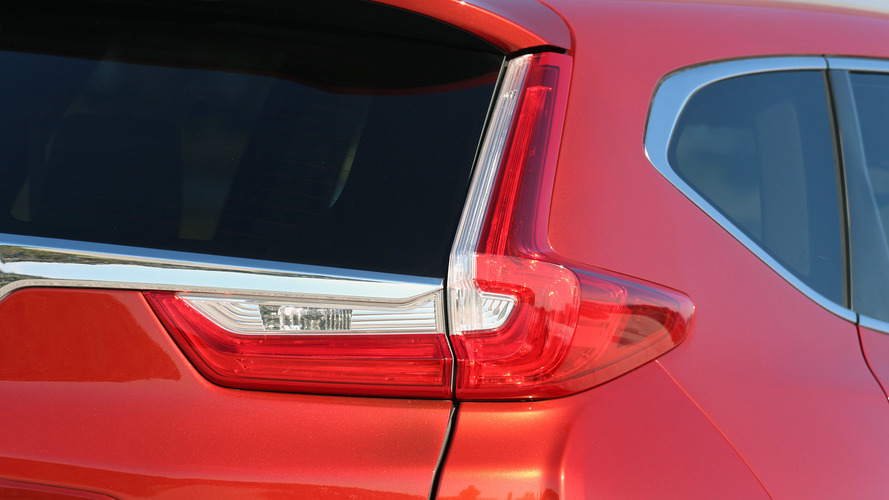 This new CR-V is better to drive, more comfortable to sit in, and offers more onboard technology.

I still love the looks of the original cute-ute CR-V – boxy and upright, adorably rugged. Of course, the CR-V is a more mature, civil offering these days, and its fifth-generation design reflects that. Gone are the frumpy headlights and grille from last year; in their place are sleek, slim lighting elements and a two-tier grille. From the profile view, the larger body honestly looks a little heavy, sitting on its 18-inch wheels. Around back, the CR-V ditches its vertical-only taillamps for lights that span horizontally into the tailgate, instead.

Really, the CR-V just looks like every other two-box crossover. Park this in line with a Chevy Equinox, Ford Escape, and Nissan Rogue, and it won’t necessarily stand out. The design is modern, while playing it safe, and will likely age well over the years. In terms of sheer size, the CR-V only gets a little bigger in this new generation – an extra 1.2 inches of length, but 1.6 more inches in the wheelbase, and an additional 1.4 inches of height.

The big gains are inside, where the cargo area is nearly 10 inches longer than before, and there’s an additional 2.1 inches of rear legroom. From every seat in the house, you’ll find airy, spacious accommodations, with lots of nooks and crannies for storage. There’s a new, adjustable center console with specific places for your smallest gadgets, but with the ability to accommodate larger items like a purse or laptop. With the second-row seats folded flat, the new CR-V boasts 75.8 cubic feet of storage – more than the Nissan Rogue or Subaru Forester – and a low load-in height and wide hatch aperture make it super easy to throw big stuff in the back. 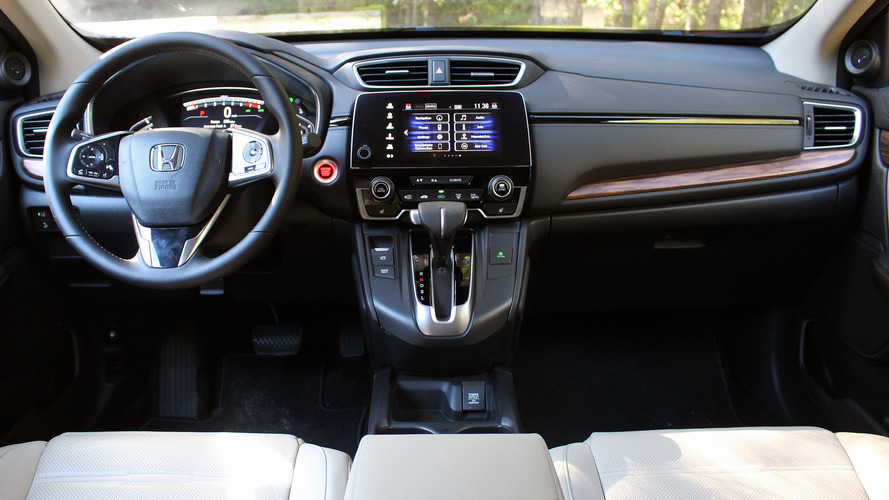 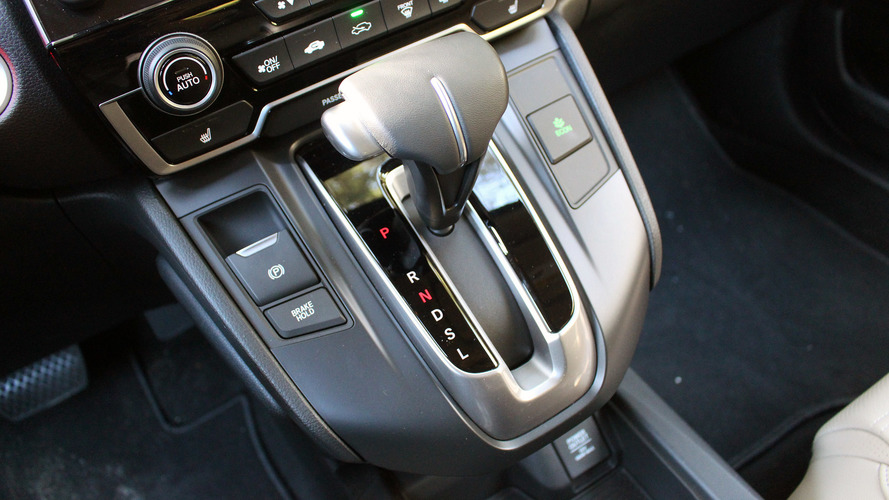 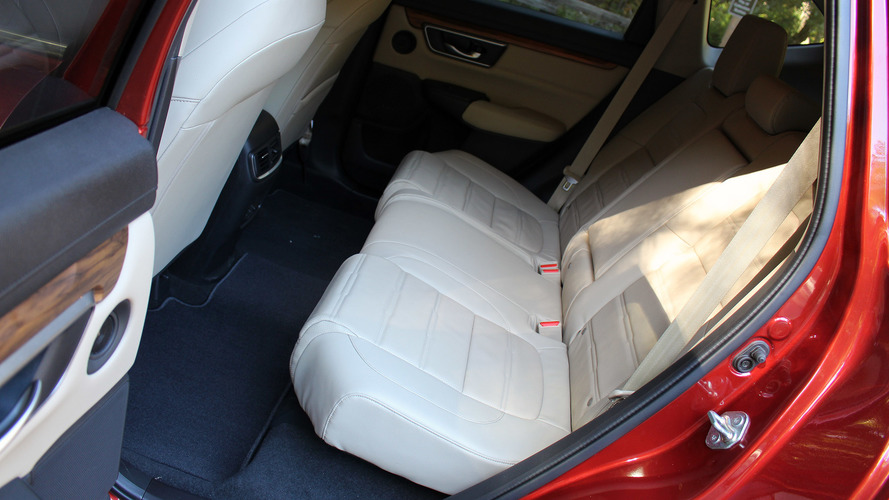 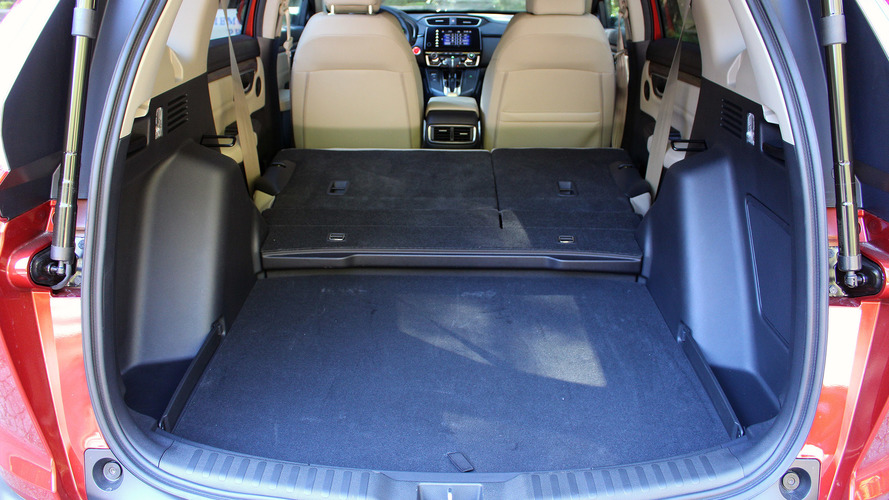 Fit and finish, no matter where you look or touch, is fantastic.

At the business end of the cabin, drivers are greeted with a new digital gauge display (like the Civic’s), and a redesigned dash with Honda’s seven-inch Display Audio infotainment system. Oh, and what’s that you see at the bottom, left corner of the screen? A legit volume knob – something Honda once took away, but finally brought back. What a thrill! But I digress, beyond the pleasure of being able to actually crank the volume up and down, the Display Audio system works as well as it does in every other Honda, with Android Auto and Apple CarPlay functionality and factory navigation optional on EX-L and standard on Touring trims. All in, the front seats are great places to spend time: comfortable and relatively supportive, with a nicely designed cockpit in front of you. Fit and finish, no matter where you look or touch, is fantastic.

It’s a quiet cabin, too. During a drive from Monterey to San Francisco, along the winding roads and highways of northern California, road and wind noise are nicely filtered out of the cabin. The only thing you can occasionally hear is the engine – going uphill, or merging onto the freeway, the continuously variable transmission holds the motor in the meat of the rev range. It’s not unpleasant, or unusual for the class, so don’t take that as a con.

Besides, the new engine itself is a real champ. It’s the 1.5-liter turbo four-cylinder engine plucked from the Civic, but with an additional 16 horsepower and 17 pound-feet of torque, for ratings of 190 hp and 179 lb-ft. You can still get the current CR-V’s naturally aspirated 2.4-liter inline-four in the base LX model, but EX trims and above are turbo-only affairs. The benefit here isn’t just more power – it’s a smoother engine overall, with better power delivery and improved fuel economy, to boot. The front-wheel-drive LX is rated at 26 miles per gallon city and 32 mpg highway, but the FWD EX, EX-L, and Touring models up those numbers to 28 city and 34 highway. Thanks, small-displacement, turbo engine. Adding all-wheel drive – a $1,300 option on every trim – reduces each city and highway number by just 1 mpg. 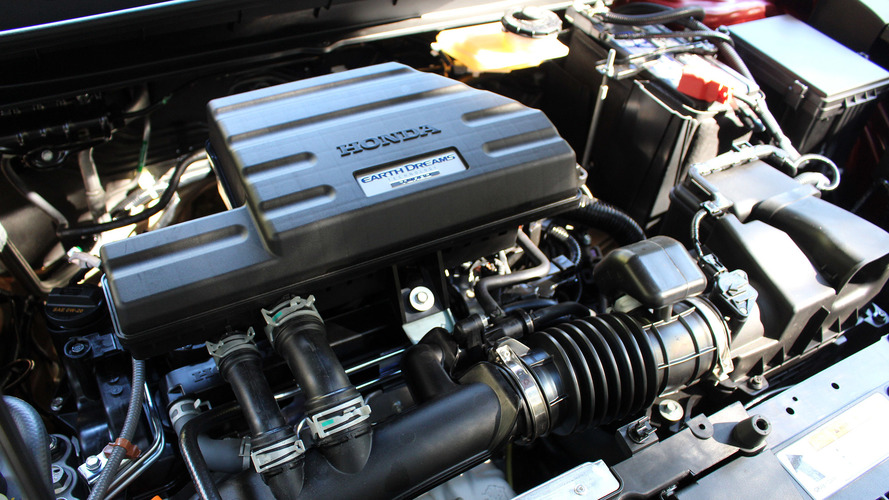 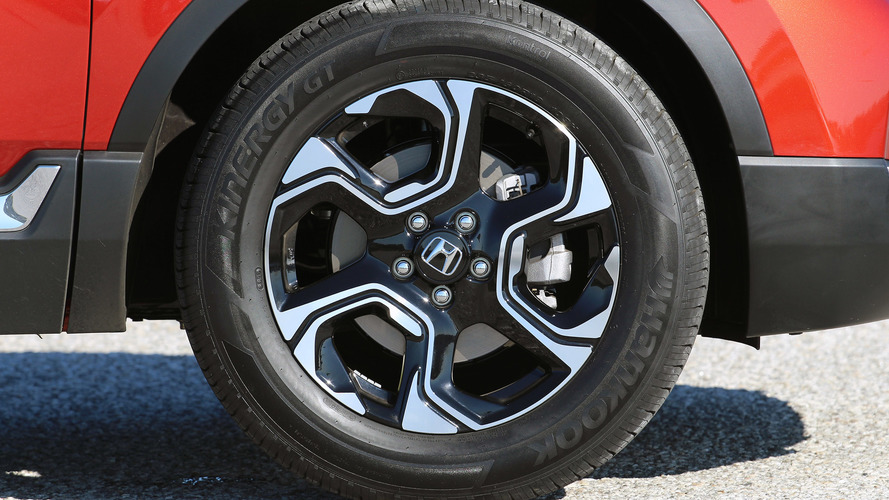 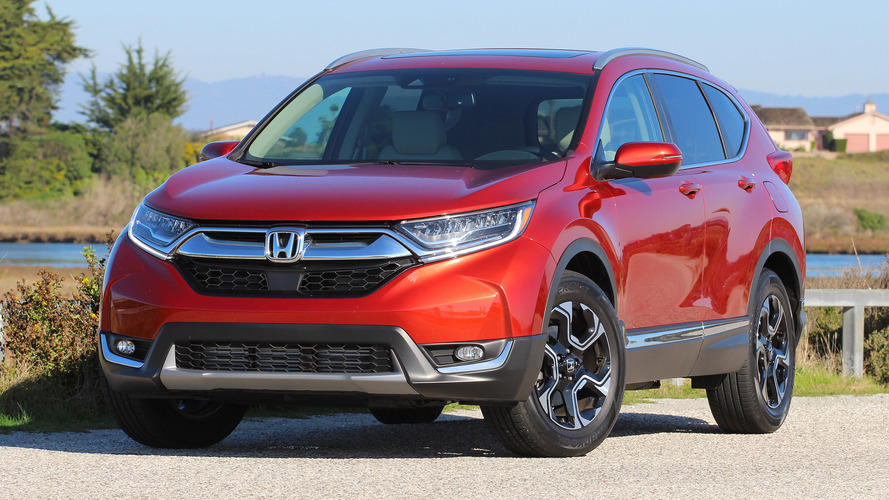 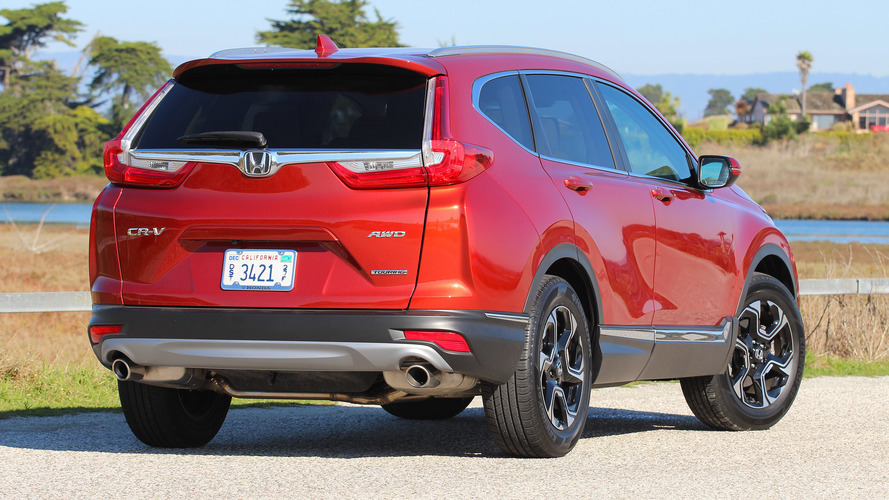 The new CR-V positions itself as perhaps the most well-rounded offering in the small CUV class.

While the 1.5T occasionally struggles with steep hills, the majority of the time, this engine feels right at home under the hood of the CR-V. Power is adequate, with enough oomph to hustle the CR-V out of its own way, but by no means is this a quick car. It moves down the road with confidence, with light, direct, variable-ratio steering (tighter, too, with 2.3 turns lock-to-lock, compared to 3.1 in the old car), and good chassis tuning. Larger wheels, better brakes, and redesigned suspension geometry make the ride and handling characteristics feel a bit more sophisticated – this CR-V is more mature and upscale, though a lot of that has to do with better weight and feedback through the steering. The new CR-V still likely won’t out-handle a CX-5 – I’d love to drive the two back-to-back – but it’s better to drive than its predecessor, both in terms of driver engagement and overall poise.

It’s a good CR-V, through and through, and won’t cost you much more than the outgoing model. Base pricing only increases by $200, and even all the way up to Touring AWD, you’ll only see maybe a couple hundred bucks of price difference, 2016 versus 2017. That’s great, considering how much more content the CR-V offers, including better infotainment, the Honda Sensing active safety suite (lane-keep assist, adaptive cruise control, collision mitigation braking, etc., standard on EX and above), LED headlights (Touring only), and a lot more.

It’s really hard to think of reasons why I couldn’t recommend the CR-V to pretty much anyone shopping for a compact crossover. It builds upon a solid foundation, and adds a number of new features and even better driving dynamics and interior comfort than before. Once again, Honda’s CR-V positions itself as perhaps the most well-rounded offering in the small CUV class.