It clears the cones at an impressive 79 km/h.

The current-generation Audi Q5 received a facelift in 2021 but the bones reach back to 2017. It's still sprightly on its tires despite the age, at least when it comes to emergency maneuvers anyway. The 2022 model featured here –  a Q5 Sportback 45 TSFI – didn't merely pass the Moose Test. It earned some extra credit.

The latest test from km77.com has the sleek SUV sailing easily past the 77 km/h (48 mph) benchmark speed. In fact, the Q5's performance is so surprising that the initial test run at 75 km/h (47 mph) caught the driver off guard. We see the Audi dart left upon exiting the last emergency turn, a result of the driver reacting to non-existent oversteer. The Q5 was completely composed and controlled throughout the series of quick lane changes, and it remained that way to a maximum speed of 79 km/h (49 mph). This was the fastest clean pass, but only a single cone was brushed at 80 km/h (50 mph). 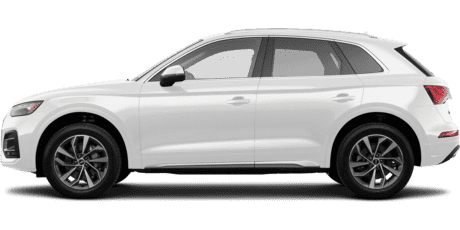 Furthermore, the Q5 Sportback never exhibited any jarring behavior. The prevailing characteristic at higher speeds is understeer, which isn't exciting for enthusiastic driving but it's preferred for stable, predictable motoring. The understeer scrubbed quite a bit of speed during the last half of the run, but the Audi still made the final turn without hitting cones. Its failing pass at 80 km/h saw the bumper clip the very first inside cone.

Of course, different vehicle configurations can have different results. This particular Q5 Sportback had the optional air suspension, which was set to auto for the tests. It also rode on optional 20-inch wheels with 255/45-series Pirelli Scorpion tires, driven by a turbocharged 2.0-liter engine with a mild hybrid system making 261 horsepower (195 kilowatts).

In the Moose Test world, the Q5 Sportback is actually in some rare air. It completed the test faster than its RS3 sibling as well as the E-Tron GT, two vehicles designed with performance in mind. It also topped the Honda Civic's 77 km/h run and handily beat the BMW i4's 73 km/h Moose Test score. Curiously, it's other SUVs and crossovers like the BMW X3 or Hyundai Ioniq 5 that hold higher speeds comparable to Audi times in the tricky test.