If Chevrolet introduces a new truck or SUV, then it's a safe bet a GMC variant isn't far behind. The 2023 GMC Canyon, though, is not simply a Chevy Colorado with the bowtie ripped off. Wearing unmistakably unique sheetmetal, carrying exclusive equipment, and finally getting its own hardcore off-road model, the third-generation Canyon makes a strong statement in an increasingly competitive segment.

A major element of that class is now off-roadability. In addition to the Colorado ZR2 and Toyota Tacoma TRD Pro, the upcoming Ford Ranger Raptor makes clear the importance automakers are placing on rock crawling and desert running. Enter the Canyon AT4X, which expands on the philosophy of the AT4 model with similar hardware to the Colorado ZR2. Like that truck, it wears 17-inch wheels on 33-inch mud-terrain tires, boasts a lifted ride height with Multimatic DSSV dampers, and carries electronic front and rear lockers with a trim-specific Baja drive mode.

Building on that package is the AT4X Edition 1, which will only exist for (you guessed it) the first model year. Packing a 9,500-pound ComeUp winch in an off-road bumper with a high-powered, 30-inch LED light bar, 17-inch beadlock-capable wheels, front and rear underbody cameras (part of a 10-camera system), and reconfigurable bed rails, it's the ultimate off-road Canyon. But even without the limited-edition model, the AT4X will look the business.

That's true of the Denali and regular AT4 variants, too, of course. Designers stretched the egg-crate grille horizontally rather than vertically, and that touch conspires neatly with the slim running lights and split headlights to present a premium, but unquestionably aggressive, face. The upside-L-shaped running lights seem to mimic the way the body curves over the muscular fenders, which feature wheel arches with integrated orange clearance lights. 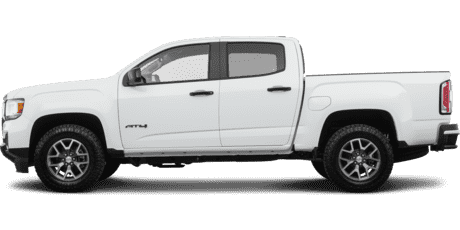 These aren't federally mandated or anything, but GMC says the cue received rave reviews from consumers when introduced on the Sierra HD – adding it to the Canyon was a no-brainer, as the small lights neatly frame the standard four-door cab. Out back, LED taillights match the signature of the front units and flank a small-ish tailgate that's nevertheless adorned with all the badges.

Along with shared design cues, all 2023 Canyons carry the same powertrain as the Chevy Colorado: a turbocharged 2.7-liter four-cylinder. GMC isn't sharing quite as much detail on its powertrain as corporate sibling Chevy, aside from saying the AT4X would have a “high-output” engine with up to 430 pound-feet of torque, but it's very likely there will be an eight-speed automatic, and the final figures will mimic the Colorado. That should mean 237 horsepower and 259 lb-ft on base and mid-range trims, while the Denali, AT4, and AT4X will pack 310 hp with 390 lb-ft in the former two and 430 in the latter.

GMC has significantly elevated the in-cabin experience with the new Canyon. Both AT4X and Denali feature a segment-exclusive head-up display, along with an 11.0-inch digital instrument cluster and an 11.3-inch touchscreen that lives in what looks like single unified housing. But this isn't a rehash of the slab design on a Mercedes, BMW, or Kia – the cluster has a shroud and lives in its own binocle, but it looks connected to the floating touchscreen. The design takes some inspiration from the Corvette, albeit without angling the touchscreen toward the driver.

The dash design is horizontally focused, with squat layers and an abundance of materials sandwiched into the tight space. There's leather, real wood on the Denali, carbon fiber on the AT4X, and plastic that's either shiny or painted to look anodized. GMC deserves praise for its use of detailing and color on both Denali and AT4X, too.

Black and tan are a classic combo for the premium model, but the black/red/white on the off-road model is bright, brave, and refreshing, with splashes of contrast stitching on the seat bolsters and door pockets. If only it weren't for the few crummy plastics – the dash topper and the upper portions of the door are inexcusably hard and cheap, which simply doesn't befit the Denali or AT4X mission or price.

And friends, that price will likely be high. GMC is only sharing prices for the AT4X Edition 1 – reservations open today and require a $100 deposit – but at $63,350 (not including destination, which GMC hasn't announced yet), it will probably be the most expensive truck in the class to start. A Jeep Gladiator Rubicon costs just under $50,000 to start, while the current Colorado ZR2 demands $46,000. For what it's worth, GMC says the standard Canyon will start around $40,000, but that's still an $8,000 increase over the most affordable Crew Cab 2022 model on sale today.

Along with detailed pricing, GMC isn't sharing fuel economy for this new truck. We expect that to arrive later this year, ahead of the early 2023 on-sale date for the base truck, Denali, and AT4. Despite the pre-orderable Edition 1, the AT4X will actually arrive last, with a targeted on-sale date in Spring 2023.