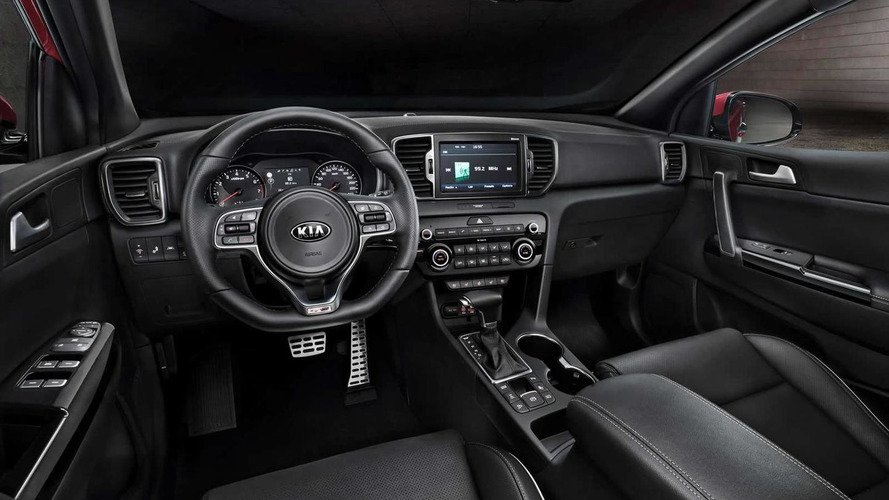 Kia has released a trio of images with the new Sportage's interior, along with comprehensive details regarding the car’s underpinnings.

Kia has released a trio of images with the new Sportage's interior, along with comprehensive details regarding the car's underpinnings.

The fourth generation is billed as an all-new model and compared to the one it replaces it's 40mm longer (at 4480mm) and has a 30mm longer wheelbase (at 2670mm) while the height has remained the same at 1635mm. Its new body is also more aerodynamically efficient as drag has been reduced from the previous 0.35 to 0.33 Cd thanks to the revised undercover and the new bumpers.

Due to the model's increased proportions, trunk capacity has grown considerably from 465 liters to 503 liters and they also bumped the fuel tank's size from 58 to 62 liters. Alloy wheel options are vast and range in size from 16 to 19 inches, including an exclusive 19-inch wheel design for the newly added GT Line which adopts a sportier design with ice cube LED fog lamps, dual exhaust mufflers, metal-like underbody diffuser and a sharper suspension setup.

The 2016 Kia Sportage will be available with a 1.6-liter GDI engine developing 132 PS and 161 Nm of torque along with a turbocharged version bumping the output to 177 PS and 265 Nm. There's also a more economical 115 PS 1.7-liter CRDi turbodiesel and an upgraded iteration of the 2.0-liter offered with 136 PS & 373 Nm and 184 PS & 400 Nm. Depending on engine choice, Kia is offering a six-speed manual transmission, an automatic and their new seven-speed dual-clutch 'box.

Stepping inside the cabin, it has received more soft-touch materials and larger 7- and 8-inch touchscreen displays for the infotainment system working together with the standard 6-speaker, 160-watt sound system or the optional 8-speaker, 320-watt JBL setup. Thanks to the car's extended proportions, the interior offers an extra 5mm of headroom in the front and 16mm at the back while legroom has increased by 19mm front and 7mm rear. At an additional cost, the Sportage can be configured with heated front seats with 10-way power control for the driver's seat and 8-way for the passenger . The rear seats can be reclined in one of the 17 available positions (from 23 to 37 degrees) and these too can also be heated for greater comfort.

Following its world premiere later this month at the Frankfurt Motor Show, the fourth-gen Kia Sportage will go on sale in Europe in the first quarter of 2016.

More details can be accessed in the press release section below.

Gallery: Kia reveals interior and technical specs of 2016 Sportage ahead of Frankfurt launch