Driving enthusiasts scored a win last week with the debut of the 2023 Toyota GR Corolla. The hot hatchback offers something not often found these days – a spritely turbocharged engine driving all four wheels through a three-pedal manual transmission. It goes on sale later in 2022, and while we don't know the price just yet, we do have an idea of how many Toyota will build: at least 6,500 all total.

In an email to Motor1.com, a Toyota spokesperson explained the up-spec Circuit Edition will have a production run of 1,500 units. The GR Corolla Core trim will be more than 5,000 units, though a specific cap isn't mentioned. These numbers represent the first year of production. 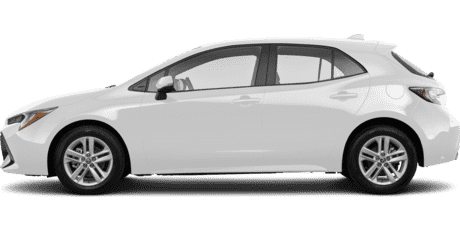 save over $3,400 on average off MSRP* on a new Toyota Corolla Hatchback

The Circuit Edition will be a one-and-done version of the hot hatch, available only for the 2023 model year. It comes standard with numerous upgrades including limited-slip differentials for the front and rear axles, a carbon-fiber roof, synthetic leather upholstery, the up-spec stereo, heated seats, and other goodies that are optional on the GR Corolla Core. The carbon-fiber roof isn't an option; neither is the Circuit Edition hood with a sizable bulge and functional vents. Along with a massive rear wing, the Circuit Edition offers a decidedly more aggressive exterior look versus the Core trim level.

Regardless of the aesthetics, both versions pack the same overachieving turbocharged 1.6-liter three-cylinder engine. The G16E-GTS mill develops 300 horsepower (224 kilowatts) and 273 pound-feet (370 Newton-meters) of torque, with the torque peak holding steady from 3,000 to 5,500 rpm. It goes to the ground through Toyota's GR-Four all-wheel-drive system, which offers a selectable power split of 40 percent, 50 percent, or 70 percent to the rear wheels. And yes, for now at least the only transmission offered is a six-speed stick.

The New GR Corolla Is Here:

The big question at this point is price. Toyota hasn't offered any clues relating to MSRP or where it might slot in the company's performance portfolio. In our comparison to the Subaru WRX and Volkswagen Golf R, we speculate that a starting point in the low-to-mid $30,000 range might be a sweet spot. The Circuit Edition will obviously command a higher price, but with total 2023 production numbers reaching at least 6,500 vehicles, hopefully the GR Corolla won't be subject to excessive dealership markups once it reaches showrooms later this year.