Compact pickups are back in the USA.

And just like that, we have a new compact pickup truck segment in America. Once upon a time, small Ford Rangers battled with Chevrolet S-10s and smaller versions of the Toyota Tacoma and Nissan Frontier. Those two Japanese rigs are now mid-size, scrapping with the larger mid-size Ranger and Chevy Colorado, leaving the small-truck arena a quiet and lonely place. Until now.

We've watched the Ford Maverick progress steadily through development, and our comprehensive Maverick debut article is filled with all the details of this small unibody truck. However, it's not the first such machine to debut in this born-again segment. Hyundai beat Ford to the punch by nearly two months with the Santa Cruz, another unibody pickup with a short bed, seating for five, and a desire to win the hearts of adventure seekers not interested in full-size truck culture. 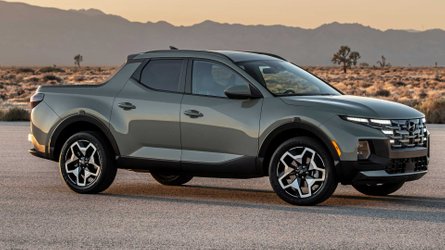 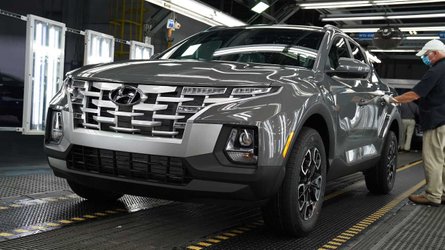 With the Maverick's cover finally lifted, comparisons to the Santa Cruz are certainly inevitable. While some details on both pickups are still unknown at this time, we have plenty of information to take a good look at how these minitrucks match up. Here's what you need to know about the newest rivalry in the automotive universe.

Party In The Back

The defining characteristic of a truck – even a small one – is obviously its ability to haul stuff. At a glance, it looks like the advantage goes to Ford but it's not that simple. The Maverick's bed stretches 4.5 feet whereas the Santa Cruz features a slightly shorter 4.3-foot bed. However, the Ford's bed is 4.5 feet whether you're at the top or the bottom, compared to the Santa Cruz which cuts back to just over 4 feet at the top thanks to its tonneau cover.

When it comes to payload, however, Hyundai takes the advantage with a maximum capacity of 1,748 pounds (789 kilograms). The Maverick tops out at 1,500 pounds (680 kg), though Ford touts a trick tailgate that can sit in multiple positions, allowing folks to carry bulky cargo such as 4x8-foot sheets of plywood without issue. The Maverick also boasts multiple power points in the bed, but the Santa Cruz isn't without some tricks of its own. A hidden storage area in the floor is large enough to hold two large duffel bags, and adjustable tie-downs in the bed offer versatility in securing loads.

Interestingly, both the Maverick and Santa Cruz are strikingly similar here. Each offers a choice of two engines starting with a 2.5-liter four-cylinder, but Ford adopts a hybrid setup in the base model Maverick to generate a curious 191 horsepower (142 kilowatts). We say curious because Hyundai hasn't listed a final figure for its base 2.5-liter mill, other than to say it will make over 190 hp so yeah, Ford has itself covered at 191 ponies. Both turn the front wheels in base trim, though Ford uses a CVT versus an eight-speed auto in the Santa Cruz.

Hyundai's up-spec engine is also a 2.5-liter four-pot, but it's turbocharged to make over 275 hp (205 kW). Ford also goes turbo in the Maverick, though the engine is the familiar 2.0-liter EcoBoost rated at 250 hp (186 kW). At this level, Ford drops the CVT for its own eight-speed auto while Hyundai offers an eight-speed DCT with paddle shifters. All-wheel-drive is also plugged in to help manage the power for both trucks.

As a result, Hyundai claims a maximum tow rating of 3,500 pounds (1,588 kg) for the standard truck. Ford goes 500 pounds higher with the EcoBoost engine for 4,000 pounds (1,814 kg) but only when equipped with the 4K tow package. Add boost to the Santa Cruz, however, and the tow rating reaches 5,000 pounds, while the base Maverick gets a 2,000-pound rating. As such, Maverick trails Santa Cruz in towing regardless of the engine or configuration.

This is a tricky comparison to make as the Maverick doesn't have any official mileage ratings just yet. However, it's worth mentioning because Ford touts an EPA-estimated 40 mpg in the city for the Maverick with its hybrid powertrain. That's only an estimated figure and it's the only one Ford wants to talk about, but even if it's merely close to that, it should dwarf Hyundai. EPA states the standard 2.5-liter Santa Cruz manages 23 mpg combined, getting just 21 in the city and 26 on the highway. The turbo model checks in at 22 mpg combined, with 19 mpg in the city and 27 on the highway.

Life Inside The Cabin

Aesthetics aside, both unibody pickups promise room for five adults. We'll put that to the test in future first drives and review segments, but for now, we can tell you the Maverick is a bit bigger overall. It rides on a 121.1-inch wheelbase compared to 118.3 for the Santa Cruz, and the Maverick is also a few inches longer. That advantage is seen primarily in the Ford's bigger bed, because, the Santa Cruz is just a little bit wider and has a teeny bit more ground clearance. It also claims slightly more interior space overall at 101.9 cubic feet versus 100.3 in the Ford.

From a technology standpoint, both trucks come standard with a modest array of driver-assist systems including automatic emergency braking and pedestrian detection. Hyundai adds lane-keep assist to the standard list but both trucks offer more advanced systems as options. Similarly, both trucks offer standard-issue 8-inch touchscreens with features like Apple CarPlay and Android Auto built-in.

Perhaps the biggest point-to-point comparison for these trucks is one we can't make just yet. Ford tells us the entry-level Maverick XL will start just under $20,000, and we mean just at $19,995. It's an attention-getting figure for sure, but we also know very few buyers choose the no-option model. Pricing is mentioned for XLT and Lariat trims, and similarly, Hyundai hasn't released any pricing information for the Santa Cruz. Ultimately, it's safe to assume both trucks will be competitively priced with desirable models likely starting in the $25,000 range. 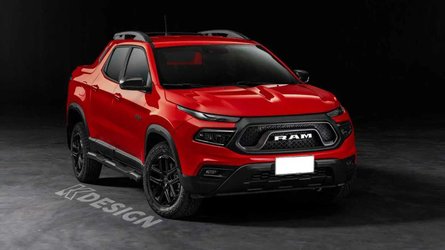 Ram 1000 Rebel Unofficial Rendering Depicts A Maverick Competitor
By: Christopher Smith
++
++
Got a tip for us? Email: tips@motor1.com