It certainly is bold, but is it beautiful?

The Outlander was already making the headlines after someone traded in his Corvette C8 for Mitsubishi’s SUV and now there’s another reason you’ll be seeing more of it in your newsfeed. Allcarnews on Instagram received images of the all-new Outlander from a reader who stumbled upon a camo-free vehicle in a parking lot.

Although the quality isn’t the highest, the images do seem to show what looks like a US-spec Outlander judging by the license plate and the orange side markers. The vehicle must’ve been spotted during a photo shoot as that would be the only explanation for its lack of disguise, unless these are actually official images the anonymous source stumbled upon.

It does appear to be the real deal as the Outlander pictured here bears a strong resemblance to Engelberg Tourer concept unveiled last year. That was Mitsubishi’s way of previewing the next-generation SUV, and we can easily observe the road-going model is not all that different. It’s the next Mitsu in line to get the love/hate split headlight design seen on the Outlander Sport and Eclipse Cross SUVs and the L200 pickup truck.

While images of the interior are not available at this point, the aforementioned Engelberg Tourer should paint an accurate picture of what to expect from the Outlander’s cabin. The concept’s interior already looked pretty much ready for a production model, so the final look should be nearly the same, and much more modern than the outgoing model.

The revamped model is expected to significantly grow in size and graduate from a compact SUV to a bona fide mid-sizer. The next Outlander Sport is also likely to go through a growth spurt and fully embrace the compact segment, thus leaving the recently updated Eclipse Cross to serve as Mitsu’s smallest offering. 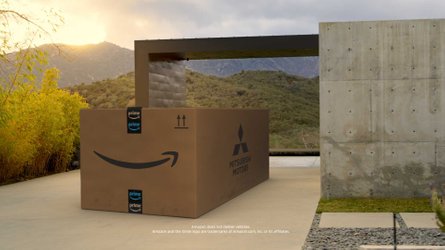 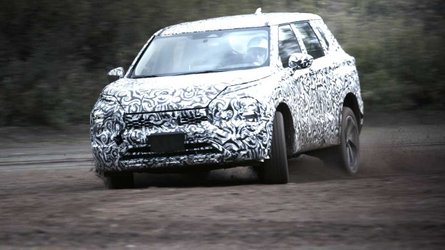 It is believed the bigger of the two Outlanders will ride on the same platform as the new Rogue and use a Nissan-sourced engine as part of the Renault-Nissan-Mitsubishi alliance. A plug-in hybrid powertrain is likely on the agenda to echo the Engelberg Tourer and its PHEV setup offering more than 70 kilometers (44 miles) of WLTP-certified electric range.

The concept had AWD courtesy of front and rear electric motors part of a more compact PHEV system to enable a more spacious cabin. Mitsubishi said the concept was able to travel for more than 700 km (435 miles) per WLTP with a fully charged battery pack and gasoline tank.

The wraps can’t come off soon enough seeing as how the Outlander was one of the worst-selling vehicles in the US during the first half of the year. The next-gen model’s repositioning should boost sales, provided people will learn to live with that striking front fascia...