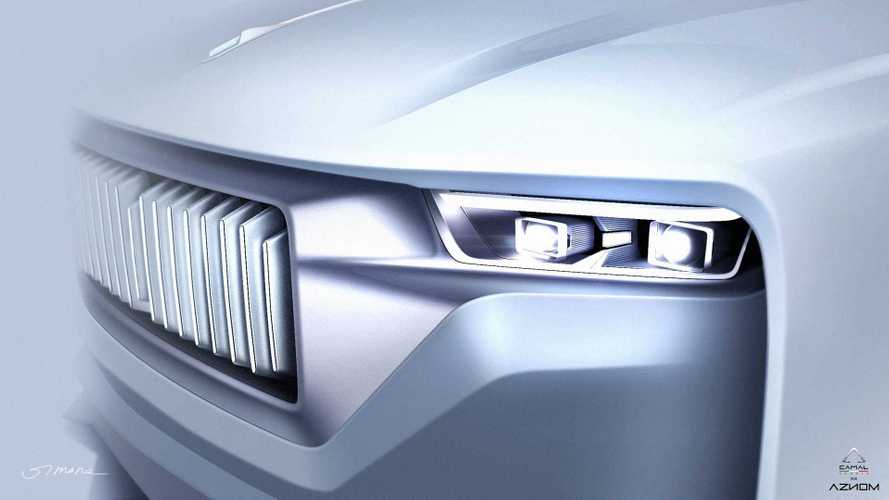 All 20 feet of it will be revealed at the end of October.

These teaser photos give us a taste of what to expect. Aznom calls it Palladium, and if the chiseled face at the top of the screen and wide backside below are any indication, this sedan should have quite the imposing presence. That's especially true since Aznom tells us outright that the car's dimensions stretch six meters (19.6 feet) in length and nearly two meters (6.5 feet) to the roof. By comparison, that's almost identical to a new Ford F-150 Crew Cab pickup, so yeah, this will be a big boy.

It will be more than that, however. The Palladium is described by Aznom as the world's first "hyper-limousine," with styling inspired by opulent vehicles from the 1930s and imposing luxury machines used by diplomats and heads of state. Exactly what that means is unknown – this is just a teaser after all. But in addition to that, the Palladium will boast an all-wheel-drive system designed for off-road use. Presumably, it won't simply be a Lincoln Town Car mounted to a crazy monster truck chassis.

Motoring Outside The Box:

We've seen some impressive projects come from Aznom over the years. In 2018 we reported on a curiously styled SUV built from a Ram 1500. That was Aznom, though it's unclear if the Palladium will be created from an existing model or walk tall as its own, in-house project. Whatever its origins might be, it will be produced in limited numbers and as such, it will likely be quite expensive.

We don't have a specific debut date for this intriguing machine, but it will happen sometime during the last week of October at the Milano Monza Open Air Motor Show in Milan.