An epic idea that didn't survive, for obvious reasons.

Ah, the 1970s. In this instance we're talking about 1972, which is when this car-camper contraption hails from. Towing a big camper trailer with a car might seem like a daunting task, but full frames like the one beneath this 1972 Chevrolet Caprice were once common in Americana, and such a platform is plenty strong for such things. Or rather, it is if you attach the trailer to the frame instead of the roof. More on that in a bit.

First, let's do a proper introduction. This isn't a one-off creation – you're looking at a double-axle gooseneck trailer called the Shadow, built by Harmon Industries. Instead of connecting to a bumper-mount hitch, the Shadow used its own mounting system designed to install on the roof of a car. It's actually a rather slick design because it shortens the combined length of the trailer and tow vehicle, and it's insanely maneuverable. Even a very long car like this old Chevrolet can actually turn 360 degrees while connected to the trailer. Brilliant, right?

This particular rig was posted to Facebook by Colton Graham, who was kind enough to share the shots with us. We don't have the backstory on it, aside from both the trailer and the car looking remarkably good for their age. The trailer is decked out inside with the proper 1970's green/orange color combination, including shag carpeting deep enough for small animals to get lost in. We hope that vintage stereo still works, not to mention the rotary dial phone though you'll need an old-school telephone wire to actually use it.

Camping Outside The Box: 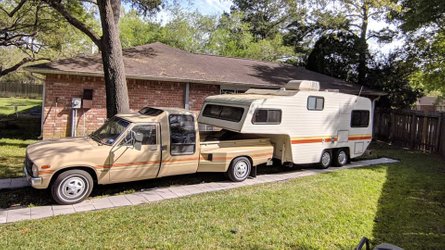 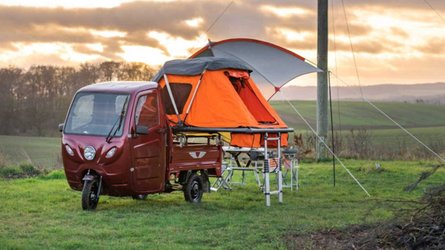 There's also a plethora of paperwork featured in the photos, and some of it describes the trailer. This is probably a good time to mention the obvious flaw with this design, which is why you don't see many of these on the road. History for the Harmon Industries Shadow is hard to come by, but mounting a trailer to a roof not designed for such forces apparently caused more than a few cars to suffer damage.

Mind you, that's just from towing – we shudder to think how those drip-rail mounting brackets would handle the forces of an accident. Yes, the exceptional maneuverability is cool, but it's a very unwelcome trade-off for the car becoming the trailer's crumple zone in a crash. That's why this was an interesting but very short-lived foray into gooseneck camper trailers for cars.

It's still a very cool piece of motorhome history. Special thanks to Colton Graham for sharing this well-kept survivor with the motoring world.