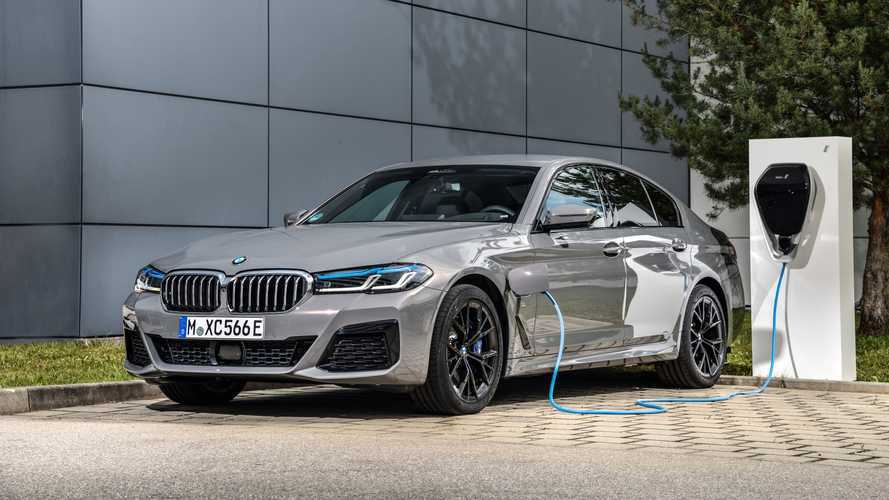 BMW has just announced a number of upgrades and updates for some of its models as a part of the company's annual fall update cycle. The improvements for Fall 2020 focus mainly on increased efficiency and reduced emissions but there are also other novelties worth talking about.

First of all, BMW says all its models, in all their versions, now comply with the Euro 6d emissions standards. The 5 Series benefits from the introduction of three additional plug-in hybrid models, the 545e xDrive Sedan, 530e Touring, and 530e xDrive Touring. The first one of them uses a six-cylinder PHEV system, while the 530e models rely on four-cylinder 2.0-liter gasoline units. All in all, the 5 Series now offers a portfolio of five different plug-in hybrid models, for which BMW says is “the largest selection of models with electrified drive” in the segment.

Diesel may be a dirty word here in the United States but customers on the European market are still hungry for torquey compression ignition engines. BMW answers those needs with new six-cylinder, 48-volt mild-hybrid diesel engines for the 3 Series and 8 Series models. The new units generate 286 horsepower (210 kilowatts) and 340 hp (250 kW) in the 30d and 40d variants, respectively. Thanks to the added electrical support, the 330d Sedan, for example, sprints from a standstill to 62 miles per hour (0-100 kilometers per hour) in just 5.3 seconds.

Other upgrades that will be available from November 2020 include the Urban Cruise Control function, new digital services for the infotainment system, new headlights variants for the X1 and X2, and new paint finishes for a number of models. Full details are available at the press release section below.

Munich. Increased efficiency through consistent electrification, optimised emissions and innovations in the areas of driver assistance and digital services are the focus of the model revision measures for numerous BMW model series that will take effect in autumn 2020. From November 2020, all models of the premium brand will meet the requirements of the currently strictest exhaust emission standard Euro 6d. In the BMW 5 Series, the range of plug-in hybrid models has been extended by three new variants. New inline 6-cylinder diesel engines and 48-volt mild hybrid technology lower fuel consumption and emissions of selected models in the BMW 3 Series and BMW 8 Series. In addition, further engines will supplement the drive portfolio of the BMW 1 Series and the BMW 2 Series Gran Coupé.

The new Urban Cruise Control function, which will be part of the Driving Assistant Professional option in many current models from November 2020, provides added comfort and safety. The latest digital services for models equipped with BMW Operating System 7 increase driving pleasure even further. BMW News provides the driver with personalised audio news. New options when creating the driver profile make it easier to personalise the vehicle. The range of functions of the BMW Intelligent Personal Assistant will also be expanded further. New body finishes and optional extras will be available for numerous models from November 2020.

In the new BMW 545e xDrive Sedan, an inline 6-cylinder petrol engine and an electric drive integrated into the 8-speed Steptronic transmission deliver impressive driving dynamics in a particularly efficient manner. The power of the two drive units adds up to a maximum system output of 290 kW/394 hp and is distributed between the front and rear wheels as required by the intelligent BMW xDrive all-wheel drive. The brand’s hallmark combination of energy efficiency and sportiness also characterises the new Touring models, whose plug-in hybrid system consists of a 4-cylinder petrol engine and an electric drive system also integrated into the 8-speed Steptronic transmission. Together they generate a system output of up to 215 kW/292 hp in the XtraBoost mode when load requirements are particularly high.

Increased dynamic performance and reduced fuel consumption: New inline 6-cylinder diesel engines with 48-volt mild hybrid technology in the BMW 3 Series and BMW 8 Series.With the introduction of 48-volt mild hybrid technology in additional models, BMW continues to consistently reduce fuel consumption and emissions in its current vehicle fleet. This is linked to the introduction of a new generation of inline 6-cylinder diesel engines. As of autumn 2020, four mid-size models of the BMW 3 Series and three luxury sports cars of the BMW 8 Series will offer noticeably more dynamic performance and increased efficiency.

This twofold and BMW typical progress is achieved through further advanced BMW TwinPower Turbo technology and additionally with the aid of a particularly powerful starter generator and an additional battery. The dynamic power delivery when starting off and accelerating is enhanced by the additional power of 8 kW/11 hp spontaneously provided by the 48-volt starter generator. In other load ranges the electric drive can relieve the combustion engine and thus increase its efficiency. The power required for this is generated by intensive recuperation in braking and thrust phases and stored in a 48-volt battery, which also supplies the vehicle’s electrical system.

The new diesel engines for the BMW 3 Series and the BMW 8 Series also represent the latest state of the art with regard to emissions. They feature exhaust gas treatment technology, whose engine-proximate components consist of a diesel oxidation catalytic converter and an SCR coating on the diesel particulate filter. In order to optimally reduce nitrogen oxide (NOX) emissions, a second metering unit is additionally integrated at the outlet of the engine-proximate SCR system.

Outstanding economy is the hallmark of the new entry-level diesel engine for the BMW 2 Series Gran Coupé. The 3-cylinder diesel engine of the new BMW 216d Gran Coupé (fuel consumption combined: 4.1 – 3.8 l/100 km*; combined CO2 emissions: 108 – 99 g/km) provides a maximum output of 85 kW/116 hp and a maximum torque of 270 Nm. It transmits its power to a 7-speed Steptronic transmission with double clutch as standard and enables acceleration from zero to 100 km/h in 10.3 seconds.

The range of optional equipment for the BMW 1 Series and the BMW 2 Series Gran Coupé is supplemented by the BMW Individual Shadow Line lights. With the black inserts at the upper edge of the headlamps they make the front view even more powerfully expressive.

Urban Cruise Control: Increased comfort and optimised safety when driving in urban traffic.The increased level of comfort and safety achieved through combined speed and distance control will also be available in numerous current BMW models when driving in city traffic from autumn 2020 onwards. In conjunction with the optional Driving Assistant Professional, the Urban Cruise Control function is available in the BMW 3 Series and BMW 5 Series, the BMW 6 Series Gran Turismo, the BMW 8 Series and the BMW X5, BMW X6, BMW X7, BMW M5, BMW M8, BMW X5 M and BMW X6 M model series. It extends the range of functions of the Active Cruise Control with Stop & Go function by a traffic light recognition function. In addition to vehicles and traffic signs ahead, traffic lights registered by the stereo camera are also taken into account.

In the case of traffic light signals that are clearly related to the lane you are travelling, these are automatically registered by the speed and distance control system. If the traffic light is red, the system decelerates the vehicle to a standstill. A green light signals the continuation of the journey. In a more complex intersection situation where, for example, different light signals apply to different lanes, a traffic light symbol is displayed in the instrument cluster. The driver can then confirm the light signal shown there and continue to use the automatic speed and distance control or control the speed himself. For additional comfort in city traffic there is a drive reminder function. While stationary at a traffic light, the current traffic light phase is displayed in the instrument cluster; at the beginning of the green phase, the driver also receives a signal to start driving.

The Urban Cruise Control function can also be integrated into the car at a later date by means of a Remote Software Upgrade. With the exception of the BMW 8 Series models, this option is available for vehicles of all the above-mentioned series produced from July 2020 onwards and which are equipped with the Driving Assistant Professional.

New digital services for more driving pleasure: BMW News, BMW Intelligent Personal Assistant with new functions, personal profile picture and simple log-in.The latest generation of the display and control system makes it possible to use new digital services in numerous current BMW models. The BMW Operating System 7, which is available in conjunction with BMW Live Cockpit, BMW Live Cockpit Plus or BMW Live Cockpit Professional, allows the driver to customise what is displayed to a very high degree. From November 2020, audio content will also be tailored to the driver’s wishes and needs with BMW News. Based on the driver’s individual interests, current online news is selected from publisher offerings and broadcast in the form of naturally spoken language via the vehicle's audio system.

The BMW Intelligent Personal Assistant is one of the particularly innovative services that features in current models with BMW Operating System 7. The digital companion, which enables intuitive operation of numerous vehicle functions via voice control (“Hey, BMW”), is constantly gaining new capabilities. From autumn 2020, the operating modes MAX eDrive and AUTO eDrive or ELECTRIC and HYBRID can also be activated in the appropriately equipped plug-in hybrid models by means of a naturally spoken instruction. In addition, the BMW Intelligent Personal Assistant will be able to play back the drive sounds of other BMW models via the audio system when asked a corresponding question such as ("What does a BMW M3 sound like?") in cars delivered to the German market.

Optimised options for creating a driver profile allow further customisation opportunities. From November 2020, the driver can no longer only login by entering the BMW ID manually, but also via the My BMW App as well, making the process very convenient. A QR code generated for this purpose can be displayed on the Control Display, which can be scanned using a smartphone. The personal driver profile data can then be transferred to the vehicle. Also new: The driver can add a photo of his choice to his individual profile.

BMW X1 and BMW X2: New headlamp variants and BMW Individual High Gloss Shadow Line with extended features.Adaptive LED headlights will be available for the compact BMW X2 Sports Activity Coupé from November 2020. They optimise visibility when driving at night, among other things by means of a high beam matrix function. This feature is able to increase the range of vision while at the same time avoiding any dazzle effect on other road users. To achieve this, the high beam is divided into several LED segments that can be activated and deactivated independently of each other to adapt how the road is illuminated to the respective traffic situation.

In addition, the striking BMW Individual Shadow Line lights are available as a new option for the BMW X2 and the BMW X1. The sporty appearance of the BMW X2 can be further enhanced by the BMW Individual High Gloss Shadow Line with extended features. In addition to the high-gloss black side window surrounds, this option includes a black frame for the BMW kidney grille and tailpipe trims in chrome black.