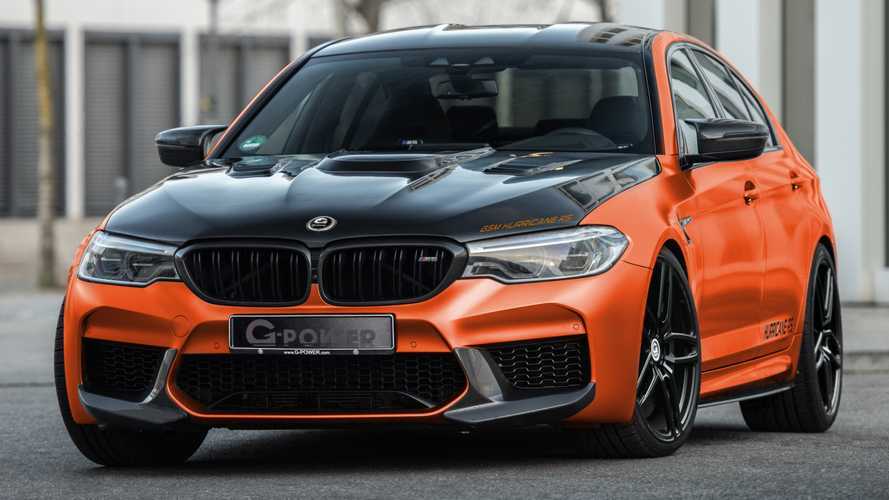 The Hurricane RS offers ludicrous performance by accelerating like a Bugatti Veyron.

It was precisely a week ago when G-Power let loose a BMW M8 with a copious amount of power and now the tuner is doing the same with this flashy M5. It’s called the Hurricane RS and wears an orange metallic body wrap priced at €3,800 (about $4,200), but not on that carbon fiber hood (€5,236 / $5,750) with a center bulge flanked by vertical vents.

The super sedan rides on 21-inch forged wheels with Michelin tires available as a full set for €9,545 ($10,500) and swaps out the stock exhaust system for a titanium setup with quad 100-mm tips bathed in carbon fiber. As with the other upgrades, the custom exhaust tailored to the M5 on tuner steroids is not exactly cheap, with G-Power asking a hefty €8,449 ($9,300).

By far the biggest change the four-door supercar has gone through is underneath the hood where the twin-turbo 4.4-liter V8 has been massaged to deliver an astounding 829 horsepower and 1,050 Newton-meters (774 pound-feet) of torque. It now needs a Bugatti Veyron-matching two and a half seconds to complete the sprint to 62 mph (100 km/h) and will continue to accelerate until hitting 217 mph (350 km/h).

The massive power gain of more than 200 hp compared to a stock M5 Competition was obtained through a custom pair of turbochargers (€5,990 / $6,575), the aforementioned exhaust, along with a variety of other hardware and software tweaks. Interestingly, G-Power mentions the car’s impressive top speed is actually electronically governed to protect the tires and mentions 217 mph is “probably a long way short of what the Hurricane RS is capable of” without the limiter.

Rumor has it BMW itself will be giving the M5 more power by introducing a hotter CS special edition with a new twin-turbo V8 codenamed “S68” said to deliver more than the 617 hp offered by the M5 Competition. If the report is accurate, the M5 CS will probably be based on the facelifted 5 Series / M5 we’ve spotted several times already.

G-Power Has A Soft Spot For BMWs: