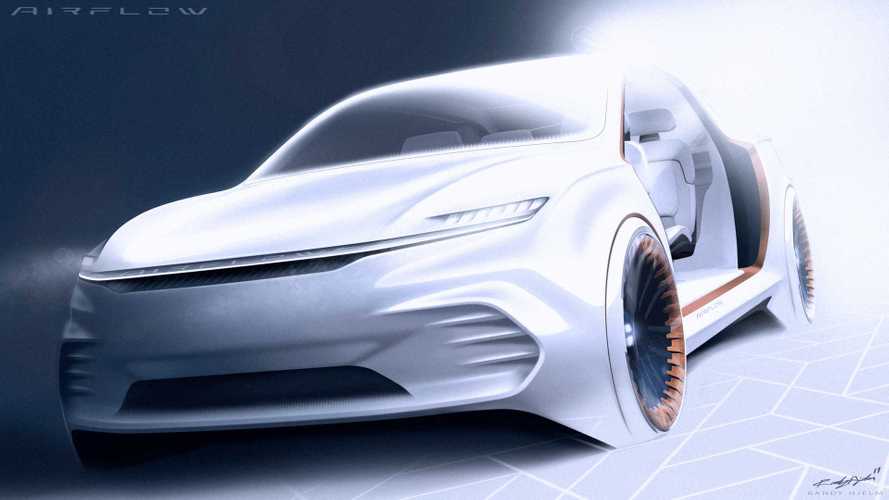 As it looks toward the future, Chrysler draws a name from its past. The American brand will unveil the Airflow Vision concept at this year’s Consumer Electronics Show in Las Vegas, Nevada.

Taking its name from the aerodynamic Chrysler Airflow sedan of the 1930s, the Airflow Vision relies on the “dimensions and flat load floor of the Chrysler Pacifica [Hybrid]” to create a “first-class travel experience.” Based off of the artwork supplied by Chrysler, the Airflow Vision’s interior appears to be designed with reality in mind. Sure, there’s concept kit such as a pair of wild-looking bucket seats for both the vehicle's first and second rows, but most things appear reasonably production-ready – even the screens that make up the gauge cluster and infotainment controls, as well as the additional screen placed ahead of the front passenger seat.

Yet, it’s the Airflow Vision’s body that’s sure to raise eyebrows. With wheels that appear as though they're integrated into the body, there’s little about this concept's exterior that seems ready for mass production. Nevertheless, we imagine the Airflow Vision’s LED exterior lighting designs, which include a wrap-around element at the rear of the vehicle and a large blade that appears to span the width of the concept’s front end, preview styling elements that Chrysler plans to incorporate into its future vehicles.

Whether the Airflow Vision is a sneak-peak of a forthcoming product from Chrysler or a look at the brand’s future exterior and interior design elements remains to be seen. Regardless, the minivan-like concept gives us hope that the brand sees a future that includes additional models to complement the aging 300 sedan and Voyager and Pacifica minivans that serve duty in Chrysler’s current vehicle lineup.