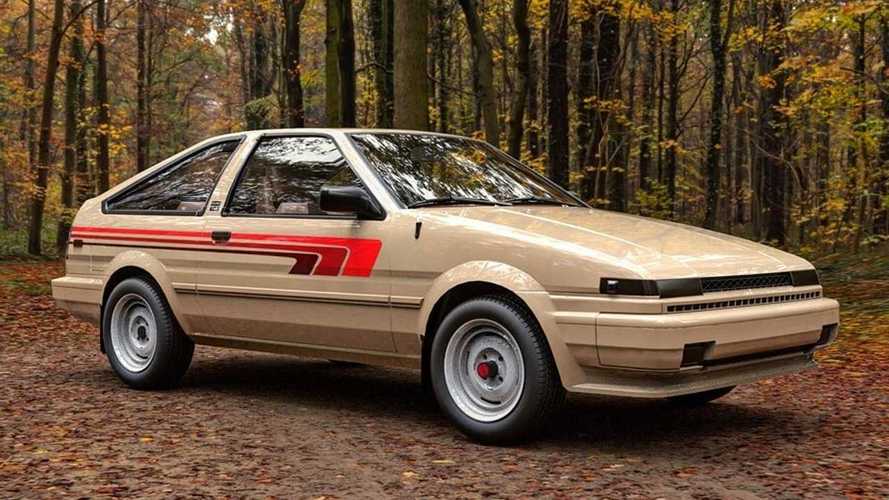 It would have been fantastic for performance-minded enthusiasts in snowy climates.

Thanks in large part to its fame in Gran Turismo and a starring role in Initial D, the rear-wheel drive Toyota Corolla GT-S has become one of the notable performance vehicles in the 1980s. The combination of nimble handling and a high-revving four-cylinder engine made for a potent package. Now, Abimelec Design imagines an alternate history for this machine by rendering a version of the coupe with a part-time four-wheel-drive system.

The artist imagines that the Corolla 4x4 SR5 would drop the revvy 4A-GE for the 22R-TE. This rare variant of Toyota's famous 22R powerplant packs a turbocharger and makes 135 horsepower (101 kilowatts) and 173 pound-feet (234 Newton-meters) of torque. The mill was briefly available in the Toyota Truck and 4Runner in the mid-1980s.

Abimelec thinks his Corolla 4x4 SR5 would use a drivetrain similar to the Toyota Tercel 4WD available in around the same period. The model featured a stick behind the gearshift that allowed drivers to switch between front- and four-wheel drive. Although in this version of the Corolla's case, the setup would need to swap between rear- and four-wheel drive.

1959 Cadillac Roadster DeVille Rendering Never Existed But Should Have

This Corolla also rides a little higher than stock and gets the steel wheels from the Toyota Truck at the time. The stripes and Turbo badges make it fit the aesthetic of the 1980s.

Abimelec thinks the four-wheel-drive Corolla would have competed against the AMC Eagle at the time because they both offered all-weather traction without forcing a customer to get a pickup or SUV. However, the Subaru XT would probably have been an even closer competitor with its available turbocharged engine and push-button four-wheel drive or all-wheel drive depending on the model year.

It's worth noting that Toyota had an all-wheel-drive performance car in the U.S. in the late-1980s. The Celica Turbo All-Trac (above) took inspiration from the company's rally car at the time. Its 2.0-liter turbocharged four-cylinder offered 190 hp (142 kW) and 190 lb-ft (258 Nm) that ran through a five-speed manual.