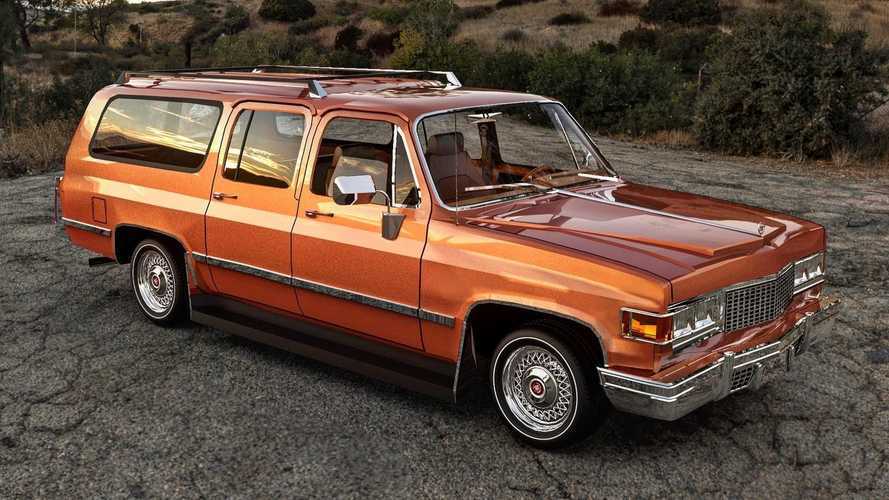 We should've had this instead of the Cimmaron.

Folks, this 1970’s Cadillac Escalade rendering is awesome. No, it’s way better than that. It’s groovy to the max. It’s the most bitchen ride parked outside the disco. It’s what the family truckster in Vacation should’ve been. Can you dig it?

When In Doubt, SUV:

Once again, Abimelec Design on Facebook just kills it with a crazy automotive mashup that looks like it could’ve come straight from the factory. In fact, this time around we aren’t just treated to a series of cool renderings. There’s even a clever vintage magazine ad describing the Escalade’s “Bendix fuel-injected Cadillac 500” engine, and of course, front disc brakes are standard. After all, it’s 1977 and this gold behemoth represents the pinnacle of American luxury.

Speaking of gold, Abimelec Design goes above and beyond with a range of proper 1970's colors including everyone’s favorite, burnt orange metallic. Actually, perhaps our favorite is the green pea metallic. No, we’d have our never-was-but-should’ve-been SUV finished in all black. Actually, it doesn’t look that bad, does it? Go ahead, admit it.

Obviously, the artistry here isn’t the colors but the way the late 1970’s Cadillac face is so brilliantly affixed to a classic Chevrolet Suburban. It’s not just the grille and big chrome bumper either – the old Caddy’s creased hood with the crown hood ornament is in full view, and you can’t have a Cadillac without some fancy wheels. These massive 15-inch rollers were all the rage back in the day, or so we’re told.

We suspect many of you might be wondering why Cadillac never actually did this. After all, GM had the nerve to bolt fancy wheels to a cheaper-than-dirt Chevy Cavalier and call it the Cimmaron. It’s a sign-of-the-times, and in the late 1970s, people were jumping on-board the downsizing train so that's what Caddy offered. It was also the era of GM badge-engineering run amok, and while things went terrifically wrong with a Cadillac-branded cheap economy car, the larger GMC Yukon that wore the Caddy crest in the late-1990s fared considerably better.

Oh how the automotive world would be different today if a 1977 Cadillac Escalade had graced the highways of America. Honestly, we’re not sure if that’s a good thing or bad, but we are sure of one thing. We really want to see one of these “vintage” SUVs in person now.