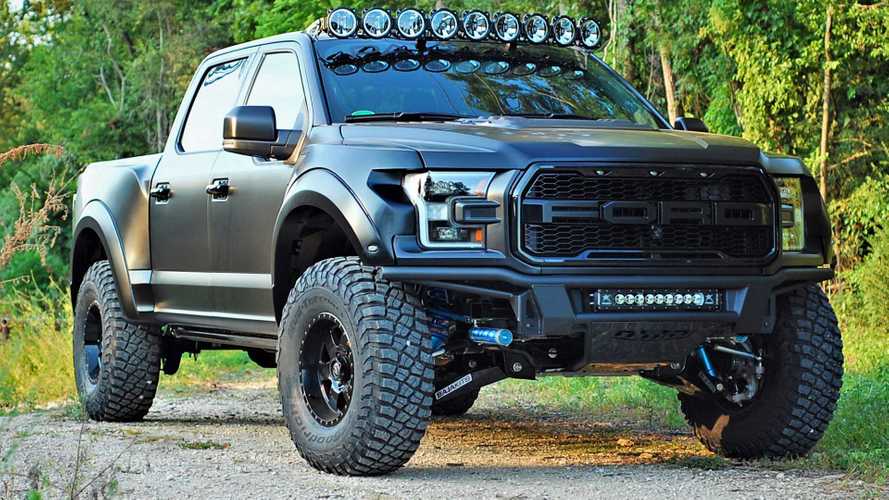 That's one way to get a new Raptor with V8 power.

Usually, when you hear about a V8 conversion on a second-generation Ford F-150 Raptor, it involves an engine swap. Texas-based aftermarket company PaxPower loves the F-150, but instead of plugging a V8 into an EcoBoost-powered Raptor, this company plugs Raptor body and suspension components into V8-powered F-150 trim levels. The subject of this particular build is an F-150 Platinum model, equipped with snazzy creature comforts like massaging leather seats, power moonroof, and a 5.0-liter V8 under the hood. From there, however, things get a bit crazy.

When In Doubt, Raptor:

This truck looks nothing like a luxurious Platinum model, nor does it even look like a typical Raptor. There’s a good reason for both observations, starting with the fact that PaxPower replaces most of the Platinum’s body panels with Raptor-specific items. However, not everything is Ford direct – the fenders and bedsides are aftermarket components that measure three inches wider, hence the not-quite-a-Raptor widebody look.

The F-150’s underpinnings are also a mix of Raptor bits and aftermarket upgrades. Beefier front suspension arms work with adjustable shocks to provide improved ride and handling depending on terrain. The Raptor’s rear leaf springs are swapped for a set that offers a better progressive rate with increased travel. Updated tie-rod ends help dial-in this F-150’s steering. Aggressive tires look ready to shred unsuspecting boulders, and a brake upgrade works to keep it all in check. The result is a truck that should conquer high-speed trails even better than the factory Raptor, especially when you see what’s under the hood.

These F-150s Are A Bit Less Frightening:

This Platinum edition pickup came with a 5.0-liter Coyote V8 already hooked to a 10-speed automatic, but PaxPower bumps output to 700-horsepower (522-kilowatt) thanks to a hefty supercharger upgrade. The company says it even maintains a 3-year/36,000-mile engine warranty, though if such things don’t concern you, there’s also a 758-hp (565-kW) package.

In its announcement, PaxPower says this F-150 Platinum/Raptor build has a retail price of $125,000. That’s a hefty sum, but a fully-optioned F-150 Platinum by itself gets close $70,000, and there's definitely a market for custom-built, six-figure pickup trucks. This one looks properly equipped to attack country trails with legit Raptor speed while providing a comfortable ride home.

The Ultimate Gen 2 Raptor
A 758-Horsepower V8 Raptor build that’s bigger and better in every way!

One year ago, PaxPower of Houston, TX was the first to market with a V8-powered Gen 2 Raptor. Thankfully, the truck
was a darling of the press and, since then, dozens of trucks have been built and delivered to customers Worldwide!

The PaxPower conversion is accomplished using all new
OEM Ford Raptor suspension, chassis, and body parts and
has been performed to endless variations of Lariat, King
Ranch, and Platinum-trim F150s. Powerplant options range
from stock 400-horsepower 5.0L V8s, to PowerStroke
Diesels with over 550 ft/lb of torque, or, our most popular
option, a 758-horsepower Stage 2 Supercharger upgraded
V8!

2018-2020 PaxPower F150 to Raptor conversions cost
between $70,000 and $125,000, depending on the base
F150, performance upgrades, and the endless accessory
options that can be applied to a Gen 2 Raptor. So far, every
truck has been significantly different and specifically
tailored to the customer’s taste and budget.

Compared to the Hennessey Velociraptor V8, which is $160,000 and comes
with one spec of wheel and bumpers, the PaxPower conversions are both a value and bespoke.
Now that has Ford has announced no changes for the 2020 Raptor and the all-new 14th-generation 2021 F150 is coming
fast, it is likely that the second-generation Ford Raptor is in it’s last year of production and the supercharged-V8 everyone
hoped for isn’t coming. PaxPower, again, wants to give the
people what they want. This time, it’s what we are dubbing the
Ultimate Gen 2 Raptor!

This truck began as a 2019 F150 Platinum with a 5.0L V8, 10-
speed transmission, four-wheel drive, and an electronic-locking
differential. The humdrum F150 body panels and austere F150
suspension were stripped away for a litany of literally the best
Raptor parts available from Ford and the aftermarket!

Most of the body panels and pieces were sourced from Ford,
except for the fenders and bedsides. These custom panels are
about 3 inches wider than the standard Raptor pieces and
available in fiberglass or carbon fiber. After a fresh coat of gloss black paint on pretty much everything, including the
Raptor grille and tailgate panel, the truck was wrapped in satin black vinyl.

The theme going forward was a mix of gloss
and satin black that extends from the roof to suspension components. The result is much more aggressive than the
standard Raptor, but with an OEM feel that perhaps represents the truck Ford would build for enthusiast if it were not
concerned with profit margins and pushing efficient ecoboost engines.
With respect to the suspension, it again puts the standard Raptor
components to shame with aftermarket pieces typically found on desert
race vehicles.

The front suspension arms are made by BajaKits from boxed
steel and feature trophy-truck level uniball joints. The front coilovers and
rear shocks are 3.0 inch internal-bypass units from King and feature easy
adjusters for ride quality and terrain. Deaver manufactured the rear
springs, which consist of many softer leafs for a more progressive spring
rate and additional travel. Steering is improved in terms of feel and
strength by billet aluminum tie-rods with heim joints.

The 5.0L V8 was then upgraded with a 2.9L Whipple supercharger to make
sure the PaxPower Raptor build would show taillights to all others,
whether on-road or off! This supercharger upgrade is available in a 700-
horsepower Stage 1 or 758-horsepower Stage 2 version. Some customers
choose the Stage 1, as it carries a 3-year/36,000 mile engine warranty and
is 50-state emissions legal, even in California! Considering the stock
Raptor has a paltry 450-horsepower and the large tuners haven’t been
able to improve on that much, even the 700-hp variant will ensure topdog/dinosaur honors. The Borla dual exhaust ends over the rear axle and
makes sure there’s no mistake that it was a V8 that just passed.

All of this power is put to any surface imaginable by 37-inch BFGoodrich KM3 tires that wrap around 17x9 Fuel Podium
wheels. The KM3 is the most aggressive DOT-approved tire in BFG’s lineup and dwarf the 34-inch all-terrain spec found
on the stock Raptor.

PaxPower customers won’t have to fear flats or lose use of the bed, like on the Shelby Baja Raptor,
as there is a matching 37-inch spare in the stock location. Stopping the additional tire weight is no problem thanks to the
Alcon front six-piston big brake kit.

The chassis was then finished off with bumpers from Addictive Desert Designs and
lighting from Rigid and KC.
The only part of the truck that was not heavily modified was the interior. But considering this started as a Platinum-trim
F150 with soft-leather and massaging seats, glass roof, power steps, and every technology option available, there wasn’t
much to improve. A few items were brought over from the Raptor; such as the overhead console with auxiliary switches
to control the lights, the Raptor/Ford Performance dash theme for the electronics, and the utilitarian floor mats.

As for pricing, this Ultimate Gen 2 Raptor from PaxPower retails
for $125,000 and is available with financing through almost any
Ford dealer. PaxPower also has partner dealerships to make
the process as easy as possible. While the price is hefty, it
represents a bargain when compared to the inflated price tags
of offerings from Hennessey, Shelby, and Roush that deliver far
less in terms of performance, appearance, brand-name
components, off-road capabilities, and the ability to customize.
Those interested or with questions should contact PaxPower
through their websites at V8Raptor.com and PaxPower.com or
call 832-369-6852.