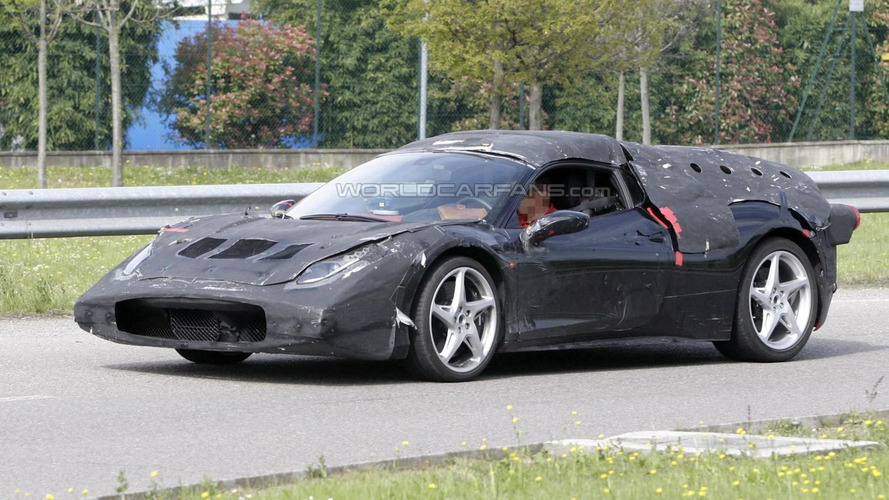 Just yesterday our spies caught a long distance look at the successor to the mighty Ferrari Enzo super car, but now we can show you the model up close.

Just yesterday our spies caught a long distance look at the successor to the mighty Ferrari Enzo super car, but now we can show you the model up close. It gives a much better look at some of the elements that the engineers are trying to hide from prying eyes.

It appears to be wearing body parts primarily sourced from the 458 Italia and it also sports a bunch of make shift parts. The engineers are most likely testing some of the more technical aspects of the model at this early stage of development. One such system is the engine which is rumored to be the 6.2-liter (6262cc) V12 unit that also powers the F12 Berlinetta. Whilst the recently unveiled vehicle had to make do with 740 PS (544 kW / 730 bhp), the Enzo successor will see around 800 PS (588 kW/789 hp).

The drivetrain is also expected to contain a Kinetic Energy Recovery System (KERS) that will generate an additional 120 PS. The bonus power can either be used in conjunction with the combustion engine or on its own for short distance emission free driving.

Ferrari is targeting performance figures to rival the Bugatti Veyron which points towards a 0-100kph (0-62mph) time of under 2.5 seconds and a top speed that rises above 408kph (254mph).

The new Enzo which is currently known by its F70 codename is expected to be shown to select Ferrari clients later this year before a public debut is conducted at the Geneva Motor Show in 2013.