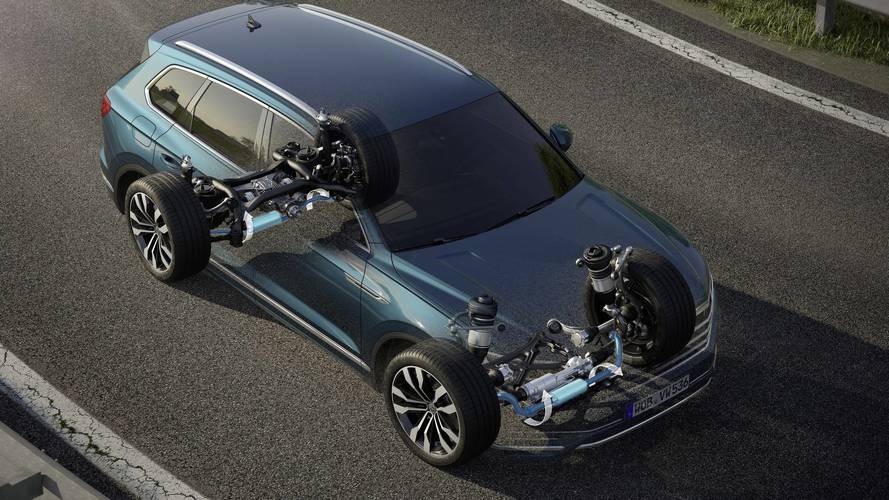 The 2019 Touareg is VW's first model ever to benefit from electromechanical anti-roll bars.

With the money pit that was the Phaeton no longer available, the Touareg has been promoted to flagship status in Europe. As it would be appropriate for a company’s range-topping model, Volkswagen has given the third generation of its luxury SUV all the latest toys. The folks from Wolfsburg want to make sure we know all about the tech goodies they’ve managed to cram inside the 2019 Touareg, many of which are a first for VW.

Premieres for the VW core brand include the thermal-imaging camera and the all-wheel-drive system detailed in recent weeks, along with the electromechanical anti-roll bars detailed today in a new episode of the series focusing on the Touareg’s tech. VW is using some big words to describe this feature, saying it helps the model set “new standards for comfort and agility in the SUV segment.”

Most of the Touareg’s running gear is made from aluminum and includes air suspension for both axles working together with adaptive electronic damping control and a VW-first electromechanical active roll compensation system (eAWS). The latter encompasses active anti-roll bars using electric motors and a 48-volt system increasing comfort by automatically adapting the settings based on the road conditions. VW brags it’s so good that it gives the Touareg “a level of agility and ride comfort that is practically unmatched by any other SUV.”

But how does it actually work? There are anti-roll bars at both front and rear axles. During cornering, the ends of these anti-roll bars twist relative to each other. This also happens when only one side of the vehicle is being driven over an uneven road surface. The tendency to roll is diminished in these two situations, while the aforementioned eAWS maintains the Touareg in a horizontal position almost parallel with the road thanks to the electromechanical anti-roll bars on the axles.

The brains of the operation are represented by a central control unit that does the necessary math and coordinates the use of the high-tech anti-roll bars accordingly. There’s a step motor connecting the two ends of each anti-roll bar, and these ends are twisted to either stiffen them or even decouple them depending on the surface of the road. So-called “supercaps,” which are fast-charging and discharging capacitors / energy accumulators, are responsible for activating the electric motors using a 48-volt system.

The high-tech running gear in the new Touareg sets new standards for comfort and agility in the SUV segment: The most advanced version of the running gear, which is made largely of lightweight aluminium, features a combination of innovative four-corner pneumatic suspension with adaptive electronic damping control and – for the first time at Volkswagen - a completely newly developed electromechanical active roll compensation system (eAWS). The eAWS features active anti-roll bars which use electric motors and a 48-volt system to adapt instantly to the driving situation, bringing a level of agility and ride comfort that is practically unmatched by any other SUV.

Here’s how the new eAWS works: The key components of the electromechanical active roll compensation are the anti-roll bars on the front and rear axles. Conventional suspensions are fitted with steel anti-roll bars at the front and rear which reach from one end of the axle to the other. The two ends of the anti-roll bar twist relative to each other when cornering (or when only one side of the vehicle is driving over very uneven road surfaces). The kinetics ensure that the vehicle’s tendency to roll in bends is reduced. The active roll compensation goes one step further as it holds the vehicle body in a horizontal position almost parallel with the road.

The eAWS features electromechanical anti-roll bars on the front and rear axles. A central control unit coordinates their use. The two ends of each anti-roll bar are connected to one another by a step motor. Depending on the driving situation, the electric motor twists the two ends of the anti-roll bar relative to each other to stiffen them or even decouples them. The high voltage of 48 volts required to activate the powerful electric motors is built up quickly using “Supercaps” (very fast charging and discharging capacitors / energy accumulators). The lateral inclination of the Touareg decreases significantly when cornering thanks to the active anti-roll bars. This makes the vehicle more agile, while still providing the driver with natural feedback about the driving dynamics.