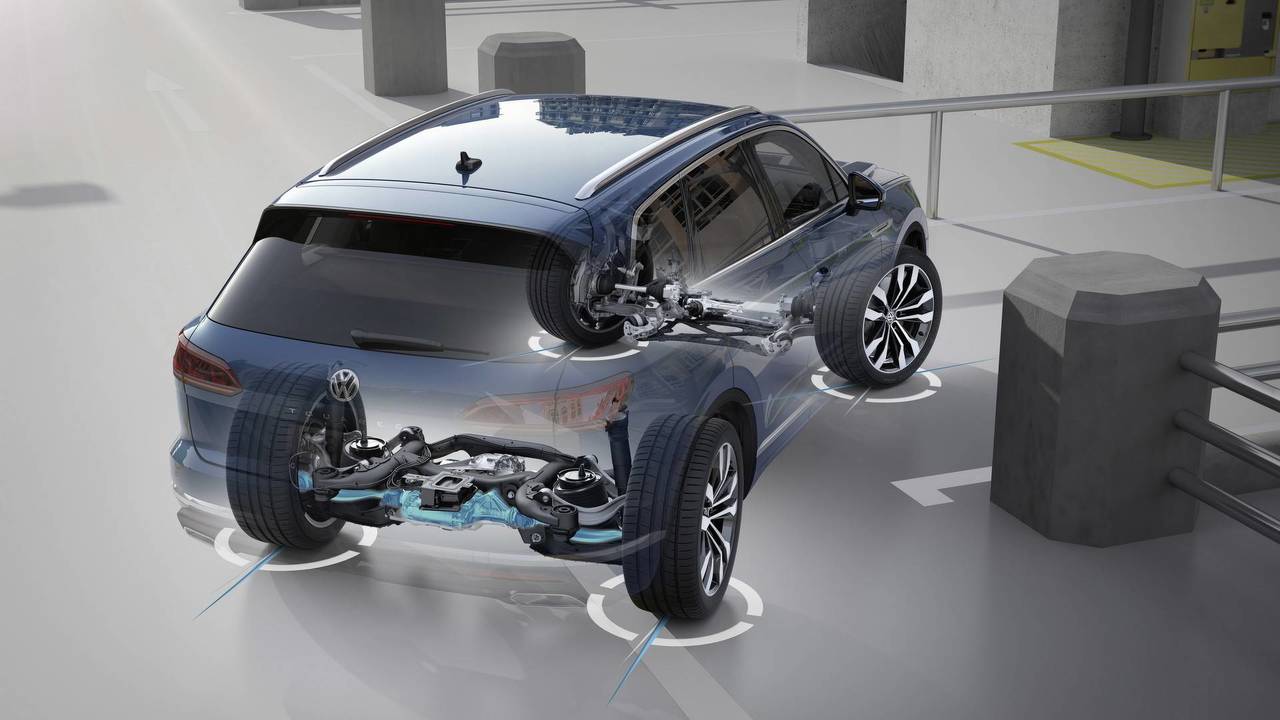 It's the first Volkswagen model to feature AWS.

With the third-generation Touareg representing an important product launch for Volkswagen, it’s no wonder the peeps from Wolfsburg are eager to detail everything that’s new with the luxury SUV. After learning about the thermal imagining camera – a first for a VW – we’re now getting acquainted with the all-wheel steering system.

Representing yet another first for the brand, AWS has also been implemented in the Touareg’s fancier cousins, the Audi Q7 and the Porsche Cayenne, with which it’s sharing the same platform. VW is selling the system as part of a technological package also encompassing adaptive air suspension and electronic damping control.

So, how does it work? At speeds of up to 37 kph (23 mph), the rear wheels turn in the opposite angle to the front ones, so when then the front wheels veer left, the rear ones are automatically going to steer to the right by up to five degrees. Doing so will boost the Touareg’s maneuverability and that should come in handy around town, when parking and while towing a trailer thanks to a reduction of the turn radius from 12.19 to 11.9 meters.

Go above 37 kph (23 mph) and the rear wheels will steer in the same direction as the front ones to improve handling and also stability when changing lanes or whenever the driver performs an evasive maneuver to avoid an incoming hazard.

The aforementioned night vision system and the AWS are just the tip of the iceberg when it comes to the amount of technology VW has managed to cram into its new flagship. Other notable examples include the matrix LED headlights and a head-up display that projects the image straight onto the windshield. There’s also the Innovision Cockpit and a semi-automated steering and lane keeping assistant capable of accelerating and braking while the SUV is travelling at speeds of up to 60 kph (37 mph).

Making the Touareg so sophisticated might cannibalize sales of the Audi Q7, but that’s the price to pay when you’re such a huge conglomerate with numerous brands – each with a vast portfolio of models.

As a final note, VW published this week on YouTube another video with the Touareg being driven in the Alps by racing legend Hans-Joachim Stuck, among other people.

It sounds rather like an attempt to achieve the impossible: with the new Touareg1, Volkswagen is introducing a luxury SUV onto the market that is as agile and as easy to handle as a compact car. Can that really work? It certainly can – all thanks to the newly developed all-wheel steering system. Both the front and rear wheels turn precisely in tune with the specific driving situation. This all-wheel steering is one of the reasons why the heavyweight Touareg cuts such a dash even in narrow city streets or when maneouvring. The new system also provides extra driving stability at high speeds.

There are essentially two types of driving scenario where the optional all-wheel steering system makes an impact: driving at speeds below 37 km/h and at speeds above 37 km/h.

Driving scenario one: At speeds up to 37 km/h, the rear wheels turn automatically at an opposing angle to the front ones. In other words, when the front wheels veer left, the electrically controlled rear axle steers to the right by up to five degrees. This improves the vehicle’s manoeuvrability. The all-wheel steering system reduces the turn radius from 12.19 to 11.19 metres, something which is particularly noticeable when it comes to parking. Manoeuvring with a trailer in tow is also made easier. One of the highlights here is the new combination of all-wheel steering and Trailer Assist – a trailer maneouvring system that steers virtually automatically. Thanks to the interplay between these two features, guiding the vehicle and trailer duo is a walk in the park, even in the tightest of spaces.

Driving scenario two: If the vehicle is travelling faster than 37 km/h, the rear wheels turn in the same direction as the front ones during steering. This once again makes for smoother handling, especially at the kind of speeds reached on country roads and motorways, as the all-wheel steering system provides stability when changing lanes (during quick overtaking, for example). The same goes for sudden evasive manoeuvres.

The new all-wheel steering feature, along with air suspension, is offered as part of a package which includes automatic adaptive suspension, height adjustment and electronic damping control. This package takes the agility of the Touareg to a level that was virtually unimaginable in this segment until recently.