Superformance's Cobra Is The Fastest Ever Hitting 201 MPH 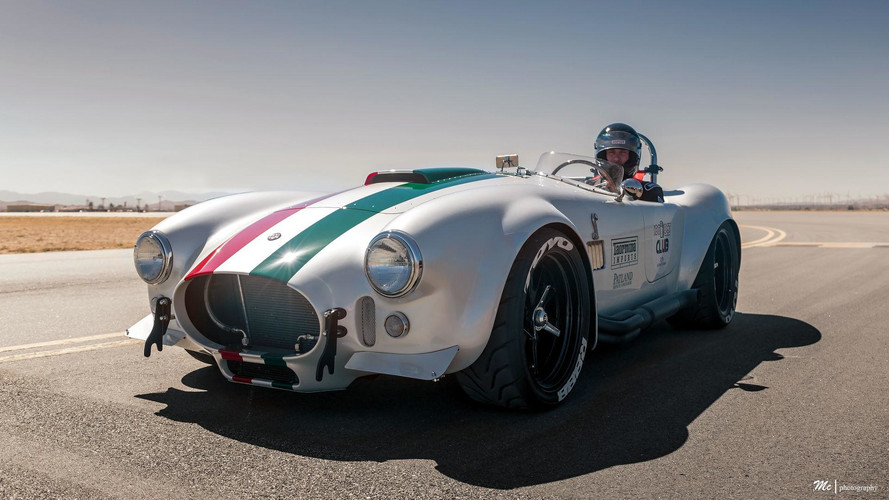 As prices of the Shelby Cobra have grown into the stratosphere, firms like Superformance have arrived with replicas for providing drivers with the same levels of performance at a much more affordable cost. The firm’s latest Superformance MkIII can even offer customers even more speed than the original, including one recently earning the title of the world’s fastest road-legal Cobra after hitting 201.1 miles per hour (324 kilometers per hour) at the Mojave Air and Space Port.

Owner Ted Taormina calls his Superformance MkIII the Italian Job, and it wears red, white, and green stripes down the body in recognition of the country’s flag. Superformance customers often customize their roadsters, and Taormina’s ride has a wide variety of modifications. Under the hood, there's a Shelby Engines' 427 FE V8 that makes a potent 690 horsepower (515 kilowatts) and 710 pound-feet (963 Newton-meters) of torque. For improved aerodynamics, there's front spoiler and canards for extra downforce and a diffuser for sucking the car down at the rear. There are also aluminum panels sealing the underside of the vehicle as a way to improve stability. A custom tune for the springs and shocks minimize fore and aft motion when accelerating.

Taormina needed months of preparation for getting his roadster to such incredible speeds. In earlier passes, the Cobra reached 169 mph (272 kph) and 190.1 mph (306 kph). By hitting 201 mph, Taormina beat the previous speed record for a road-legal Cobra that stood since 1967 when Dick Smith hit 198 mph (319 kph) in the car with serial number CSX3035.

In addition to offering replicas of various iterations of the Cobra, Superformance's lineups include recreations of the Shelby Daytona Coupe, original Ford GT40, and Chevrolet Corvette Grand Sport. The machines are quite impressive.

Ted Taormina, owner of the “Italian Job” Superformance MkIII breaks the Cobra speed record, making it the fastest Cobra ever, with a speed of 201.1 mph at the Mojave Air and Space Port.

The feat was accomplished by Ted Taormina, owner of the San Carlos, California based exotic car service specialist, Taormina Imports, who drove his “Italian Job” Superformance MkIII to a record speed of 201.1 MPH at the Mojave Air and Space Port. With months of planning and preparation leading up to this speed run, Taormina took to the tarmac at the Mojave Air and Space Port for his world record run. After two respectable passes at 169.0 mph and 190.1 mph, Taormina broke the record with a top speed of 201.1 mph.

The record was previously held by Cobra racing legend Dick Smith, who achieved a top-speed of 198 MPH in his 427 S/C CSX3035 Cobra at Daytona in 1967. Smith’s record had stood for an incredible 50 years.

“What Ted has accomplished in our Superfomance MkIII is incredible,” said Superformance CEO Lance Stander. “Ted has been an adrenaline junky his whole life and has done speed runs in a number of exotic sports cars. To accomplish this in one of our road going Superformance Cobra’s is especially significant.”

Taormina’s Superformance MkIII with an Italian inspired paint scheme is equipped with a number of modifications and is specially prepared to perform at extreme speeds. The “Italian Job” Cobra runs an OEM style Shelby Engines 427 FE engine that generates over 690 horsepower and 710 ft-lb of torque.

Taormina added an under-car spoiler in the front for downforce, and a diffuser in the rear to maintain stability. The vehicle’s entire underside was sealed with aluminum panels to provide additional stability at high speeds. Taormina also added front bumper canards to provide additional downforce, and a custom spring and shock configuration to minimize fore and aft motion. Even with these performance mods, Taormina’s MkIII Cobra maintains a street-legal classification and can be daily driven.

ABOUT SUPERFORMANCE
Superformance is a manufacturer of complete continuation and reproductions of 1960s race and street cars and was one of the first players in the industry. We have earned our reputation with our attention to detail, quality craftsmanship, fit and finish and customer service. Our products are endorsed by our licensees from trade mark holders which adds authenticity and increases the resale value. Superformance products are manufactured using all new parts which are factory assembled to ensure continuity and consistency in construction. All GT40 sales are recorded in the Shelby World registry. Superformance has a dedicated independent dealer network who together have distributed over 4000 units worldwide.