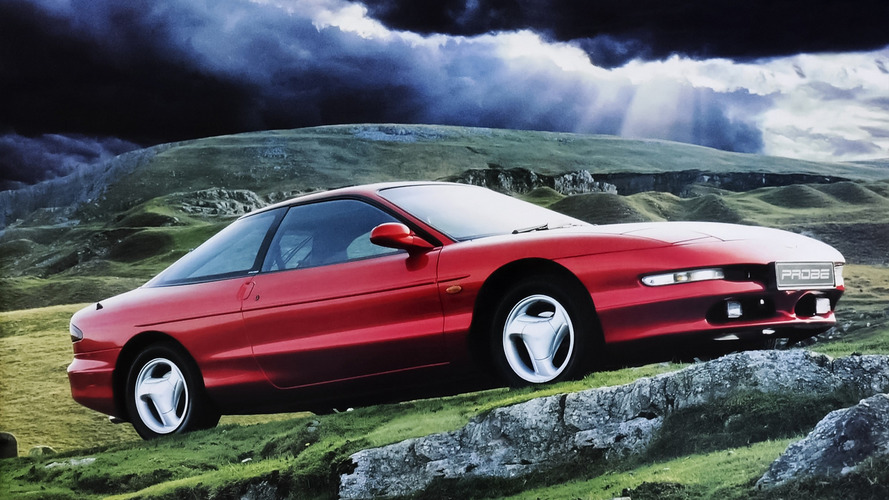 Technologically speaking, it wasn't a bad car. But there was something completely wrong with its marketing.

The Probe is a global sports coupe, introduced by Ford in 1989 to replace the EXP model in the United States and to succeed the Capri in Europe. It was sold in two generations until 1997.

The first-gen model was introduced in late 1988 and manufacturing started shortly after. It remained on sale until 1993, when the second generation was launched. A total of 309,876 vehicles rolled of the Flat Rock assembly line in Michigan.

Both generations were based on Mazda platforms and were co-engineered between Ford and the Japanese manufacturer. Many of the technical components of the car were shared with the Mazda MX-6, and the second generation was actually 60:40 engineered by Mazda.

The second generation Ford Probe (right) was bigger and lighter.

No, not really. It was, in fact, a good car to drive – in both generations, and even took the third place in Automobile Magazine’s coast-to-coast mega test in search of the best cars in the world. It was well-priced and delivered exactly what it promised - an affordable entry intro the world of sports cars.The problem with the Probe was on a completely different, mostly marketing, level.

In America, it was originally intended to be the next generation Mustang. But it wasn’t. It was a front-wheel drive car with no V8 and a Japanese ancestry. This fact resulted in progressively falling sales – in 1993 nearly 120,000 units were delivered to customers, but only four years later annual sales were just 19,419. In general, American buyers and Ford fans were not happy with what the company designed and created.

Meanwhile, at the other side of the Ocean, the Probe had the difficult task to fill the market niche formerly occupied by the Capri. In the early 1990s, the sports cars market in Europe was recovering and models like the Honda Prelude, Nissan Silvia, Mitsubishi Eclipse, and Toyota Celica were enjoying a high demand. Ford decided to launch the Probe as a direct competitor for the Japanese and German sports coupe and hoped to sell at least 20,000 Probes annually in the Great Britain. But during the three years it was sold there, only around 15,000 examples were delivered – nearly a quarter of the projected figure. According to latest reports, only 718 units are still in use in the country.

So, it’s basically a good car, launched in the wrong place at the wrong time with wrong ambitious for the wrong customers. American customers wanted a RWD V8-powered car, while European consumers desired a compact, high-revving hatch. And the Probe was none of this. That’s where the fourth generation Mustang, and the Escort and Sierra Cosworth models came to rescue the Blue oval’s reputation on both continents.

While the Probe wasn’t the sports cars everyone expected from Ford in the 80s and 90s, it was one of the first relatively successful global cars of the company. It was sold in the United States and Europe at the same time, trying to satisfy customers with completely different interests. A strategy Ford is currently running for many models under the One Ford plan, including the current Mustang – a global sports car, which enjoys a strong demand on both sides of the Ocean.