Tecnomar for Lamborghini 63 Is Supercar-Inspired Yacht With 3,945 HP

Think of it as a Lamborghini Sian for the sea.

The Tecnomar for Lamborghini 63 is a yacht that brings the brand of the Bull to the waves. It's a very special machine, perhaps even more so than the Lambo Sian, which is the current pinnacle from the Bologna-based automaker.

Giuliano Daniele from Motor1.com's Italian edition could not have imagined that after recently testing the Sian that would also have the opportunity to climb aboard the Lamborghini 63 yacht, which also took inspiration from the new supercar. The boat came from the collaboration between Lamborghini and the shipyard The Italian Sea Group.

To celebrate the year in which Ferruccio Lamborghini founded the company, the two brands have worked together to create a limited edition of 63 units, as suggested by the number contained in the name of the watercraft. This also references the length of this boat – 63 feet (20.42 meters). The width of the yacht is 17 feet 9 inches (5.4 meters). The weight is 52,911 pounds (24,000 kilograms). The idea behind the Lamborghini 63 is to create a luxury yacht with performance typical of more compact boats.

Inside, the shapes, materials, and even the instrumentation faithfully reproduce the components used in the construction of Lamborghini vehicles. This similarity is evident both on the deck and in the lower area. Lambo's Ad Personam personalization program is even handling configuring the space for Lamborghini 63 yacht buyers. 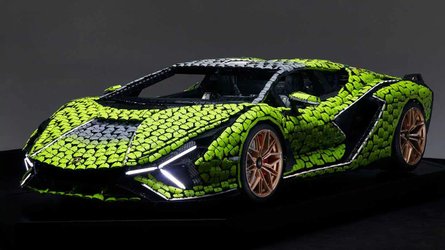 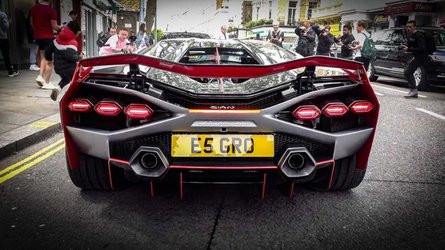 The performance also fits a Lamborghini for the sea because it's the fastest boat within the Tecnomar fleet. Power comes from two, MAN 24-liter twin-turbo diesel engines making a total of 3,945 horsepower (2,942 kilowatts). To feed them, the fuel tank holds 951 gallons (3,600 liters).

The yacht's hull has skids that deflect the flow of water for generating lift that raises the body out of the water. Steps on the underside also help create lift by guiding the detachment of the water flow at high speed and allow air under the hull to add more lift and decrease hydrodynamic resistance.

In order to optimize performance during the planing phase, there are adjustable flaps that allow to vary the trim of the boat. This adjusts the yacht's position with respect to the water.

The roof has larger dimensions than the structures that are usually used on boats of this type. The shape improves the craft's aerodynamics and provides shade for occupants.

The starting price of this Lamborghini yacht is just over €3 million ($3.55 million at current exchange rates). This isn't too much more than Lambo's €3 million asking price for the Sian.

If you could spend this amount of money to get a fancy like this, which of the two Lamborghinis would you choose?

48 Photos
By: Giuliano Daniele
Translated by: Chris Bruce
++
++
Got a tip for us? Email: tips@motor1.com