Fortunately, these cars have never been sold in the U.S. and Europe.

Of course, the most iconic and opulent SUV on the market has its copy on the Chinese market. The BAIC BJ80 is a cheap version of the previous generation Mercedes-Benz G-Class, which was unveiled at the 2015 Shanghai Motor Show. It has a 2.3-liter 250-hp (186-kW) turbocharged gasoline engine.

This Is Its Russian Cousin:

It’s actually not that easy to see Lamborghini Urus cues in this SUV but they are there. This Chinese copycat was released in June last year in five- and seven-seat versions.

Mercedes And BAIC Sign Deal To Make EVs in China

BAIC to buy 'mid to high-end' European or U.S. automaker

Fortunately, this vehicle, introduced in 2012, is a concept car and not a production model. If you are instantly thinking about the Audi R8 while looking at it, you are not mistaken. Under the skin is not the German brand’s 5.2-liter V10 but a small electric motor powered by a lithium-ion battery.

The Original Is Not Selling Well These Days:

This one is very weird. This peculiar model is based on the legendary BMW Isetta, although it lacks the famed front door of the original vehicle. Instead, it has four doors and uses an electric motor with just 5.3 hp (4 kW).

The Future Of The Isetta: 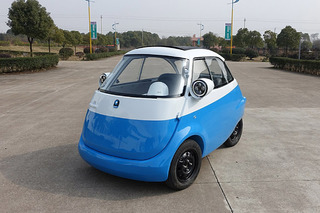 The BMW Isetta is Coming Back, But as an EV

If the Range Rover Evoque has been successful in the United States and many European countries, why shouldn't it be in China? Using that premise, the Landwind brand decided to create a copy of the British compact SUV. But, as we mentioned already, the automaker was sued to stop producing the car after losing in court from Land Rover.

We all know that Minis are relatively expensive, but in China you can buy the Lifan 320 at a much lower price. Of course, the quality of the product leaves a lot to be desired, but there’s a capable 1.3-liter gas engine under the hood with 87 hp (65 kW).

The Future Of The Mini Brand:

Watch a MINI Cooper SE Drag Race A BMW i3
⠀

Can The MINI Cooper SE Road Trip? We Drive It 1,111 Miles To Find Out

The first-generation X5 was an absolute hit for the Bavarian manufacturer. The Shuanghuan SCEO was the “alter ego” of this car, which was presented in 2007. The engine range consisted of two gasoline engines, as well as a 2.8-liter turbodiesel.

This is one of the weirdest cars on this list. It features a rear end that is “inspired” by the Porsche Macan, while at the front, the headlights are very similar to those of the Ferrari F12berlinetta.

Power comes from two electric motors with a combined output of 120 hp (90 kW). According to unofficial information, despite this modest figure, it is able to accelerate from 0 to 62 mph (0-100 kph) in just 4.8 seconds.

The electric clone of the Volkswagen Up! uses a 12-hp (9-kW) electric motor, allowing the vehicle to hit a top speed of just 31 mph (50 kph). Even its logo resembles Volkswagen’s emblem.

VW up! With R-Line Exterior Package Is All Show, No Extra Go

We are approaching the end of this list with a copy of the Porsche Macan, which uses a turbocharged gasoline engine with 190 hp (142 kW). In China, it sells for just 100,000 yuan, which is equivalent to $14,133 at the current exchange rates.

They Are Being Sued For This One:

This electric urban car is equipped with a 17-hp electric motor and has a range of about 155 miles (250 km) on a single charge. It’s a carbon copy of the Kia Picanto in terms of dimensions and shape.

Although from this side view it may take a bit longer to recognize the cloned model, the truth is that the T600 resembles two vehicles: the Volkswagen Tiguan in the front and the Audi Q5 at the back. This SUV has a 1.5-liter turbocharged gasoline engine with 143 hp (107 kW) and a six-speed automatic transmission.

Zotye T700 is a Porsche Macan copycat from China

If you’ve ever been to an international auto show, you’ve probably witnessed a certain phenomenon. Right after the world debut of a new model, a group of what appear to be Chinese journalists rushes to take very detailed photos of the just-unveiled vehicle. At first, it might seem more like they are preparing a professional in-depth coverage for a magazine or a website, but usually, the moment they start taking exact measures of the car is when you begin to realize something’s wrong. Yes, these folks are delegates of automotive brands from China.

Basically, their job is to gather as much information about new vehicles as possible. Usually, it takes from a few months to two years for their Chinese marques to come up with similarly-styled models for the local market. Fortunately, these copycats never reach the U.S. and European markets and remain China-only affairs.

Approximately a year ago, Land Rover won a landmark case against Chinese manufacturer Jiangling Motor Corporation after a court in Beijing ruled that the firm's Landwind X7 SUV bore too much of a resemblance to the Range Rover Evoque. This marked the end of production for the cheap Evoque clone and, hopefully, it could open the floodgates for similar cases to be brought forward.

We’ve decided to collect some of the most blatant Chinese car rip-offs into a single list, which includes a total of 12 copycats. Can you recognize the original models? Hit the little white arrow above to discover them and let us know in the comments section below how many of these cars you recognized.