A Day In The Dirt With BFGoodrich 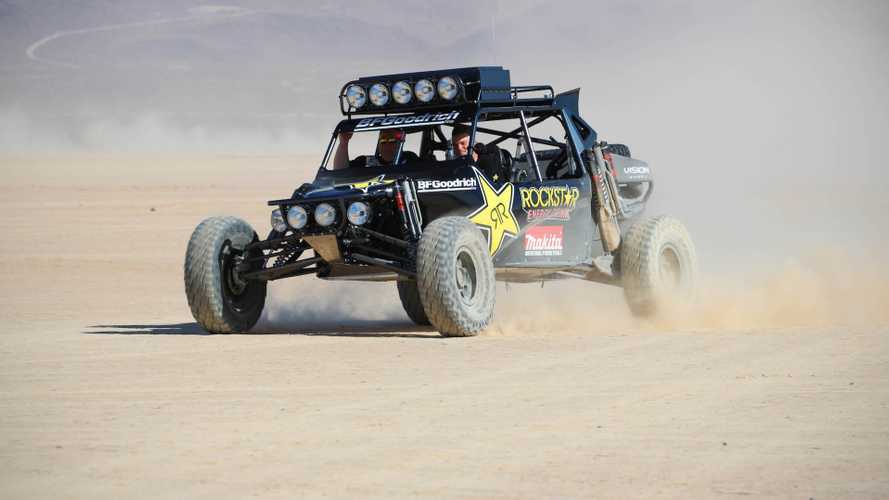 Touring a section of the famed Mint 400 course with three off-road weapons.

The KM3 is BFGoodrich's latest mud tire and it’s aimed at taking on some of the toughest terrain Mother Nature can throw at it. With a revised tread pattern, the KM3 is focused on improving traction in the mud and on the approach angle when climbing over rocks. The KM3 is also available in UTV applications, which equates to a more sizeable coverage of the total off-road market.

BFGoodrich’s half-day program included both driving and ride-along opportunities to experience first-hand the type of unforgiving hell that an off-road tire must go through. At our disposal were three drastically different vehicles – a Polaris RZR 100, a King of the Hammers-spec Jeep Wrangler to drive, and an off-road truck owned by four-time Baja 1,000 champ Rob MacCachren to ride passenger in.

Our playground? A pristine section of the Mint 400, one of the most infamous American off-road races. After a twenty year hiatus, the Mint returned to the Nevada desert in 2008 and has been garnering popularity ever since.

We started by testing the KM3's off-road prowess behind the wheel of the Polaris RZR. Its short wheelbase provided for excellent feedback from the BFGoodrich chunky tires as the RZR clawed its way through the Nevada desert’s soft dirt. Although my expert coach in the passenger seat consistently encouraged my right foot, I maintained what seemed like an appropriate 60miles per hour or so during much of the drive, which kept the RZR comfortable and controlled over the desert’s dusty berms.

When the going got rockier, – literally – the RZR's adequate low-end power and the KM3's off-road-readiness meant that I had the confidence to trundle over rocks that were bigger than the vehicle I was driving. And if one tire felt as if it was losing traction, a quick saw of the steering wheel and a dab of throttle got everything into place.

Gallery: A Day In The Dirt With BFGoodrich

The Specially-built Jeep Wrangler offered me a similar tour similar to that of the RZR, crawling over rocks and flying over sections of dust-covered trail. It wore 37-inch KM3 tires, which felt, in many ways, just as nimble as the RZR’s smaller 30-inch tires, even with the Jeep’s much lighter steering. While the Jeep didn’t maintain speeds with the same effortless paces as the smaller RZR, it took on rocky terrain with far less dubiousness.

After an hour or two of driving, it was time to switch into the passenger’s seat. MacCachren's racing team belted me down tight in the back seat of their bespoke pre-runner and told me to hold on for dear life. The racer's rig is something special to behold. Equipped with a General Motors-sourced LS3 V8, this 450-horsepower monster is designed to navigate every mile of the Baja 1000 while providing crucial information to the team along the way.

I rode in a center-mounted rear seat, complete with a perfect view of each obstacle that came flying at us. The pre-runner wafted over the desert floor with what seemed like Bentley-soft comfort levels. Tearing across the dry lakebed, we reached a speed of 107 mph without so much as a yawn from the pre-runner's engine or 37-inch KM3 tires. With a professional like MacCachren behind the wheel, you get a full sense of what an off-road tire can achieve when pushed to its limits.

Despite my novice off-road driving record, the off-road rubber inspired confidence and allowed me to truly explore the capabilities of the vehicles I drove and rode passenger in. The KM3 is a tire worth considering in a crowded market of great options. It can be found in stores nationwide and comes in 54 sizes, with five additional UTV offerings.