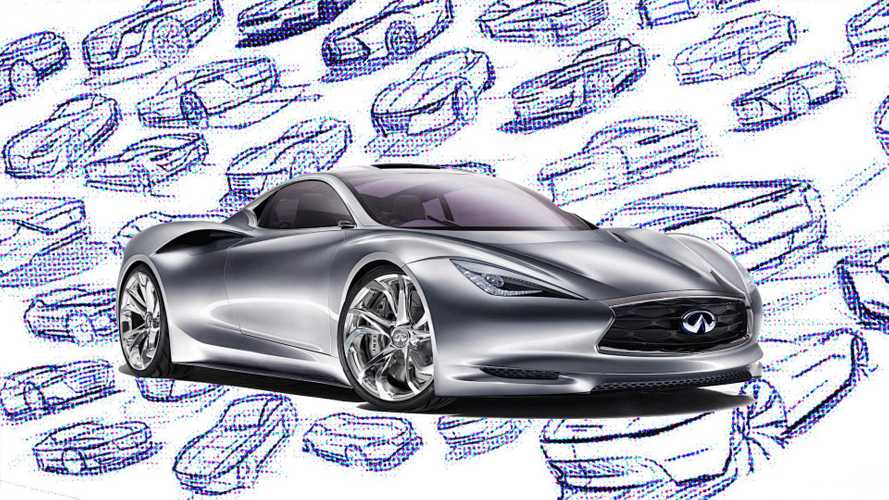 These concept cars rank among the most beautiful and unique creations to come from the luxury automaker.

The unveiling of the Infiniti Prototype 9 retro racer was a welcomed surprise. The concept draws inspiration from Formula One racers of the 1930s – even though the brand has only be in existence since since 1989 – and is scheduled to make its debut at the upcoming Pebble Beach Concours d'Elegance.

Semantics aside, the Prototype 9 remains impressive, and joins a long line of equally stunning concept cars that the Japanese luxury marque has released in its 28 years of production. Sports cars, sedans, and SUVs alike have all been the subject of study – these are six of our favorites.

The early 2000s were not only defined by Train’s "Drops of Jupiter" and the rise of Harry Potter, but also the surprising amount of high-riding crossover coupe concepts that made their debut. Infiniti, not one to be left out of the fray, showed off the FX45 in 2001. It was just the second true design study in the marque’s entire existence, and eventually gave way to the more production-friendly FX35 and FX45 SUV.

Its exterior styling was dramatic and edgy with a sharp slope in the rear, while its interior design was sleek, and now outdated. Nearly none of the styling cues carried over from concept to production – apart from the dual infotainment screen and the analog clock, both of which still remain today – but the FX45 concept still was an intriguing concept nonetheless.

Similar to the original FX45 concept, the Triant was edgy and dramatic, but a bit more composed. The front fascia was well defined, and included a pronounced rectangular grille that would carry over to nearly all production models in the years following. Infiniti described it as "an innovative combination of sportiness, luxury features, and all-wheel-drive performance," the unique gullwing-style doors acting as the centerpiece.

The Triant made its debut at the 2003 Detroit Auto Show, and came powered by a 3.5-liter V6 engine paired to a five-speed automatic transmission. The cabin included features like a 7.0-inch LCD information center display with an integrated navigation system, as well as surround sound speakers, door-mounted atmospheric lighting, and aluminum kickplates. Naturally, the Triant never made its way to production, but did influence a number of models that came in later years.

Introduced in 2009 at the Geneva Motor Show, the Infiniti Essence concept was hailed as the "world’s most powerful hybrid car" at the time, producing a whopping 600 horsepower (447 kilowatts) via a 3.7-liter biturbo V6 and an electric motor. It was also the first concept car to introduce the brand's new styling direction, features like the grille and headlights specifically would later been seen on cars like the Q50.

The Essence was the first hybrid concept car ever produced by Infiniti, and though it never reached the production line, it still provided us an impressive look at what could be in the future lineup.

At the 2012 Geneva Motor Show, Infiniti design reached an all-time high with the hybrid electric Emerg-E concept. Senior Vice President and Chief Creative Officer Shiro Nakamura said the body of the Emerg-E concept was "like silk wrapping over the wheels."

Power came courtesy of a 402-horsepower (300-kilowatt) hybrid powertrain – a 1.2-liter engine paired to an electric motor – allowing the sports car to sprint to 60 miles per hour (96 kilometers per hour) in just four seconds, and from 0-130 mph (209 kmh) in a seamless 30 second bust.

The Emerg-E never did reach the production line, sadly, but it was shown in 2012 at the Goodwood Festival of Speed as a working prototype. The project was funded largely by the British government sponsored Technology Strategy Board, which used Nissan U.K.’s Cranfield technical center as its design and development center.

The launch of the new Infiniti Q50 in 2014 brought along with it a high-powered concept that arguably should have been produced alongside it. The Q50 Eau Rouge made its debut first at the Detroit Auto Show, and came powered by a 560-horsepower engine off the GT-R paired to Nissan’s intelligent all-wheel-drive system.

A prototype version of the Q50 Eau Rouge would follow just a few months later at the Goodwood Festival of Speed, but ultimately the project was canned citing cost issues and modest sales projections. Unfortunately for this performance sedan, Infiniti has no plans of reviving the project anytime soon.

Infiniti wasn’t the only automaker to introduce a radical Vision GT concept – but it was one of the best. Making its debut at the 2014 Shanghai Motor Show, the Infiniti Vision GT concept was designed specifically for use in the video game Gran Turismo 6. It featured dramatic styling cues alongside some production finishes, all while offering unparalleled supercar-esque performance.

"Infiniti is a brand driven by design and by the desire to deliver vehicles that are evocative and progressive," said Shiro Nakamura, Chief Creative Officer and Senior Vice President of Nissan Motor Corporation. The Vision GT is exactly that.

Of course, the concept car that inspired this list – the Prototype 9 racer – makes its way into our top seven. Like many storied manufacturers before it, Infiniti has decided to rewrite history with the elegant-looking concept.

“It started as a simple thought," said Alfonso Albaisa, Infiniti’s senior vice president of global design. "What if we found a car, down at the southern tip of Japan, buried deep in the barn, hidden from all eyes for 70 years? What if in this car we found the seed of passion planted during our first Japanese Grand Prix and the power and artistry of Infiniti today? What would this discovery look like?"

The Prototype 9 is powered by a 148-horsepower (110-kilowatts) engine, allowing it to sprint to 60 mph (96 kmh) in just 5.5 seconds. Total curb weight sits at a mere 1,962 pounds (889 kilograms), and given the car’s leaf springs, solid axles, and period-correct narrow tires, we can only assume it must be a blast to drive.