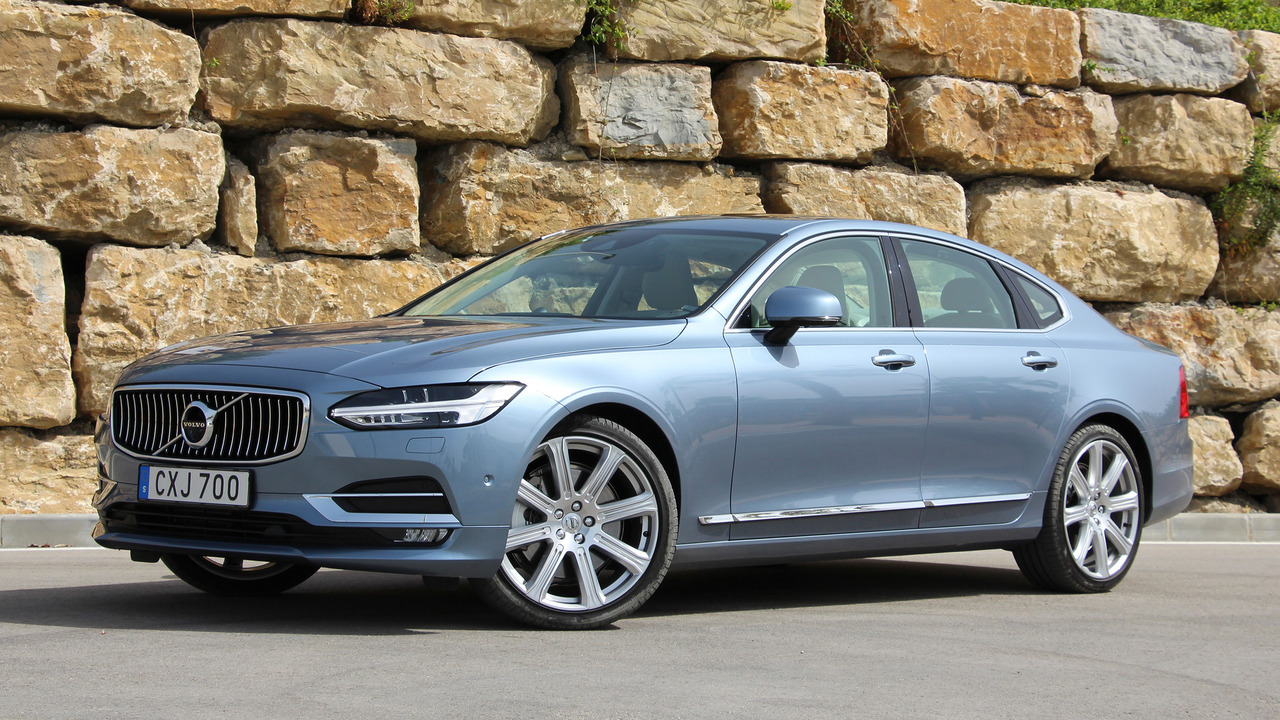 Having found its voice, Volvo sings another sweet new tune.

Slowing for a curve on a skinny, two-lane road winding through the olive groves of southern Spain in Volvo’s new S90 T6, I instinctively reach for a paddle shifter to serve myself a downshift. There isn’t one. Dammit. I ended up getting one soon enough as I slowed, thanks to the intuitive “Dynamic Mode” shift programming of the eight-speed automatic transmission, so I stabbed the throttle and punched through the other side. Reminded as I was that oh, yeah, the only way to summon a manual downshift is to tug the gear lever back, I knew what to do by the time the next corner arrived. And so I kept bombing on. Quickly.

But thus began a line of questioning that circled back on itself over and over again for the rest of the drive. Why didn’t Volvo give its 316-horsepower flagship sedan paddle shifters when most, if not all, of its large luxury competitors have them? How egregious is this oversight? Is this even an oversight at all? Really, if we’re being honest with ourselves, does the S90 even need such things?

For an answer to that last question, I ultimately arrived at “no.” Paddle shifters or not, the new S90 is a damn fine car. So is its super-slick wagon counterpart, the V90, for that matter, which I also drove in exactly the same fashion and which exhibited exactly the same behaviors.

In photos, the S90 appears square-jawed and geometric, but in person, it’s surprisingly voluptuous.

They’re also gorgeous. In photos, the S90 appears square-jawed and geometric, but in person, it’s surprisingly voluptuous. The dash-to-axle dimension, shared by every vehicle on the modular SPA platform, including the XC90 crossover, gives the car a very long hood and minimal front overhang. Like the Parthenon, close inspection reveals that most of the seemingly straight lines are gently curved. There’s also considerable fender flare and Coke-bottling in the body sides. Body jewelry is exquisite, with scalloped grille vanes, C-shaped chrome garnishes on the lower outboard air intakes and, out back, discreet parallelogram tailpipes. Volvo’s signature “Thor’s Hammer” headlamps will come standard on all U.S.-bound models, and the LED taillamps of the sedan remind some of us of the blocky lights on the back of 1980s Volvos. Missing, happily, are fender vents, hood bulges, and stand-up spoilers.

It’s even lovelier inside, where the Zen vibe established in the XC90 is made even more tranquil thanks in part to the more relaxed, less upright position of the seats, more horizontal architecture, and larger swathes of wood trim on the dashboard. Volvo has mastered the art of balancing simplicity with richness, matte finishes with brightwork, and radiused corners with hard edges. Our Inscription-grade model brandished gold-cone Bower & Wilkins speakers beneath gleaming metal grilles, a stitched-leather-covered dashboard, a USB hub, slick interior illumination, and a large 12.3-inch gauge cluster with graphics that change slightly depending on which drive mode is selected among Eco, Comfort, Dynamic, and Individual settings. Volvo’s novel, portrait-oriented Sensus infotainment system that dawned on the XC90 now features more streamlined logic, Apple CarPlay, and native Spotify. This is one well-equipped, unquestionably elegant space.

This is one well-equipped, unquestionably elegant space.

Speaking of space, there’s plenty of it. Elbow and headroom are abundant up front, and sitting in back is like falling into a barn. At 17.7 cubic feet, the trunk is gigantic. Interestingly, Volvo deploys radar, cameras, and most other forward-facing driver assistance features from behind the windshield so that they can be kept clean by the wipers during inclement weather. Unfortunately, that results in a monstrous housing the size of a Roomba behind the frameless rearview mirror. The only other bone worth picking – and this is Volvo’s own fault for its past models setting expectations so high – is that the Inscription model’s sculpted seat cushions are a bit too firm. Designed with the help of chiropractors, the seats can fairly be described as ergonomically perfect, yet they’ve lost some of the cloud-like suppleness that characterized Volvo seats in the past. The leather that covers them, however, is nothing short of Bentley-grade in softness and smoothness, and to Volvo’s credit, I felt zero aching in the backside after a very long day of driving.

As you might have gathered from the opening paragraph, the S90 is dynamically quite gifted; if it weren’t, I wouldn’t have been reaching for that downshift to begin with. While few S90 drivers will attack roads like I did, I suspect, it’s worth the effort for those with proper skills. The steering is tactile and light, if slow-ish off-center, but it feels more substantial and more direct as the wheel turns. The ride is silken with the knurled drive mode selector set to Comfort or Eco, though the car feels a slight step behind as it lists a bit in corners before biting into the asphalt. In Dynamic mode, there’s less play in the suspension and even more weight dialed in to the steering system, so the car feels far more alert. At no point does it mimic the tidy, natural balance of the Audi A6 or Cadillac CTS, but that’s probably okay by Volvo; “Relaxed Confidence” is the S90’s mantra, and that is a promise fulfilled.

“Relaxed Confidence” is the S90’s mantra, and that is a promise fulfilled.

Powertrain-wise, Volvo led with its best foot, providing only the 2.0-liter T6 four-cylinder engine for this test drive, which comes with standard all-wheel drive. The clever combination of supercharging and turbocharging allows the engine’s power to build in a wonderfully linear fashion to a peak of 316 hp at 5,700 rpm, with a flat torque curve that delivers all 295 pound-feet from 2,200 to 5,400 rpm. The engine note is pleasant, muted, and non-aggressive, and Volvo estimates that the 4,080-pound T6 sedan can hit 60 miles per hour in a quick but hardly neck-snapping 5.7 seconds. A front-drive T5, powered by a turbocharged version of the 2.0-liter engine with 250 hp at 5,500 and 258 hp at 1,500 to 4,800 rpm, will also be offered as a base model. I’ll tell you all about that version as soon as Volvo lets me near one.

My pursuit of photos took us off the prescribed drive route and inadvertently onto some narrow, rutted, and occasionally terrifying dirt trails that both Spain and Volvo’s navigation system consider roads. Considering the only other traffic I saw there consisted of wild goats, I was glad to have all-wheel drive, and even more glad it had such intuitive variable distribution of torque from wheel to wheel depending on which had the most grip. The surround view camera – activated by popping it into Reverse but functional at very low forward speeds after that – also came in handy while executing particularly slow and tricky maneuvers on those trails. Incidentally, all of this bodes rather well for the planned Cross Country version of the V90.

Here is a new luxury sedan with life and energy from a brand that has found its voice.

Every feature Volvo characterizes as a “safety” system comes standard on the S90, including low- and high-speed collision avoidance, pedestrian and large animal detection, road run-off mitigation/protection, lane departure warning, and a driver alertness sensor. Optional are driver assistance features such as the Pilot Assist semi-autonomous driving system, which can now steer, brake, and accelerate from a dead stop to 81 mph and no longer requires a “trace” vehicle in front of it. I tried this on the Autovia, and found that in most circumstances, it kept the car in the middle of the lane, requiring only the slightest touch on the steering wheel remain active. At 81 mph, however, the system misread tighter curves multiple times and drifted into adjacent lanes – with no warning! – so apparently Pilot Assist requires maintaining cautious speeds and an alert actual pilot.

At the end of the day, I came away impressed. For a starting price of $47,945 for T5 and $53,945 for the T6 in Momentum grade ($51,445 and $57,245 for the T5 and T6 Inscription models, respectively) here is a new luxury sedan with life and energy from a brand that has found its voice. Dignified if not aggressive, it is not the same voice as BMW, Audi, or Cadillac. It is Volvo’s voice. As for the paddle shifters, well, expect to see those appear on a Polestar model in the future.