Much more than just an electric van.

Forget most other new EVs. The Ford E-Transit and products like it are the most important electric vehicles coming to market this year. More than any other segment, work vehicles will be the first taste of electrification for a huge range of consumers currently committed to gas, and with effortless torque, lower operating costs, and zero-emissions operation, they should be strong evangelists for the EV movement.

But before that can happen, it's on businesses to start converting their fleets to battery-powered products. And with Ford estimating fleet turnover of just 10 to 15 percent per year, selling skilled tradespeople on the benefits of EVs is going to be a long-term effort that's secondary to the primary mission of selling their employers. Fortunately, the E-Transit brings much more to the table than the elimination of gas bills while also putting a good foot forward for the broader world of EVs.

Where the F-150 Lightning will come with regular- or extended-range batteries and a dual-motor all-wheel-drive option, the E-Transit is a single pack/single motor affair. But that undersells the changes Ford made in converting the gas-powered Transit to an EV. Engineers stacked the high-voltage components – the charge port, DC/DC module, cooling pumps, and other items – in the former home of the gas engine, atop a “Megabrace” for added support and crash protection. Most importantly, this stack is home to Pro Power Onboard.

The critically acclaimed system arrives in the E-Transit with 2.4 kilowatts of power, but with the noted benefit of providing silent operation. Is your job site indoors? The E-Transit brings the generator with none of the gas-powered F-150's noxious fumes. The battery is a 68.0-kilowatt-hour (usable) lithium-ion unit, but Ford isn't sharing exactly how long Pro Power Onboard will draw from it.

Where the F-150 Lightning will come with regular- or extended-range batteries and a dual-motor all-wheel-drive option, the E-Transit is a single pack/single motor affair.

Speaking of that battery, if you're looking at it and thinking, “That ain't enough, Chief,” I'm right there with you. But the needs of commercial businesses are different from retail customers. So while the longest-range Transit can cover only 126 miles, a relative pittance in this day and age, Ford says it's enough because the average commercial van in the United States drives just 74 miles per day.

Ford also geared the charging performance toward commercial customers. Through its Ford Pro program, the Blue Oval is providing businesses with consultants that can determine the best charging strategy, whether it be at-home chargers for employees, banks of cloud-connected 48-amp level two chargers for fleet depots, or access to the FordPass charging network. The first two options will recharge the E-Transit's battery in 8.2 hours. The third takes advantage of the modest 115.0-kilowatt DC charge rate, which will charge the battery from 15 to 80 percent in 34 minutes, or a decent-enough lunch break.

The E-Transit carries a single 198.0-kW electric motor on the rear axle. Integrated with a single-speed transmission, it sends up to 317 pound-feet of torque via reinforced halfshafts to the back wheels. A new independent rear suspension is on hand to make better use of the immediate torque while also providing substantial handling benefits, whether loaded or unloaded, over the gas-powered Transit's leaf springs and solid-rear axle. 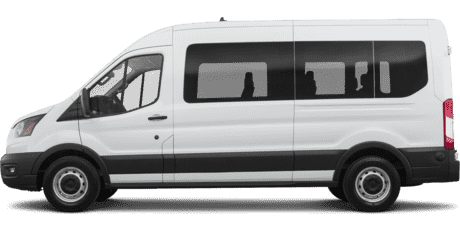 That means a business that's upfitted their gas Transit could take all of its equipment and attach it in the exact same manner to an E-Transit. Payload capacities are broadly similar to gas models too. For example, Ford rates a long-wheelbase, high-roof E-Transit at 3,380 pounds, just 10 pounds down on a rear-drive, twin-turbo gas model. The one bit of bad news is that Ford isn't planning a passenger-focused E-Transit – every electric van will come in a standard two-seat.

Between the E-Transit's capability and what Ford claims is 40-percent drop in total cost of ownership, it seems to make a fair amount of sense for some businesses, even with a higher initial purchase price ($48,880, including the $1,695 destination charge and excluding a $7,500 federal income-tax credit). But whether it will resonate with drivers and tempt them into the world of EVs is broadly dependent on how a business' owner or fleet manager uses the on-board telematics suite and the subscription Ford Pro Intelligence software.

The new Ford Pro Intelligence suite and a host of options baked into the E-Transit give these individuals an inordinate amount of power over the E-Transit experience. Some of it is quite good. Managers can track their drivers and know when they exceed speed limits. And drivers don't need to think about pre-conditioning their vans, because fleet managers can program them to warm up on a set schedule. But those same supervisors can also monitor whether a vehicle is charging and alert the driver if it's not sucking down the electrons it needs for tomorrow's workday.

When I drove the E-Transit on an hour-long route, the coach was more Bobby Knight than Phil Jackson.

Things go further than that, though. Fleet managers can adjust the E-Transit's In-Vehicle Coaching, which provides (long and infuriating) audio warnings any time the driver applies too much power or brakes too aggressively. And I get why Ford built this system in – stabbing the throttle wastes precious electricity and braking too hard causes undue wear while diminishing the vehicle's ability to recoup kinetic energy.

When I drove the E-Transit on an hour-long route, the coach was more Bobby Knight than Phil Jackson. I had to have recorded at least a dozen “braking events,” even when I got annoyed and started braking early.

This bit of aggravation aside, the E-Transit represents the EV world well. A boot full of accelerator yields prompt performance, even with the 1,000 pounds Ford added to the back to simulate a load. But not all E-Transit's perform the same.

The optional Smart Acceleration Truncation (or SAT, because “Smart Acceleration Truncation” is a terrible name) adjusts the E-Transit's performance based on the payload. My van carried less than a third of maximum of a high-roof, long-wheelbase model, so the computers limited performance to save electrons. Even wide-open “throttle” only allows about half the van's power. That said, if I maxed the weight, the nannies would release more power to provide identical performance.

The new independent rear end, even loaded with just a fraction of its maximum payload, is a dramatic improvement.

While the electric powertrain is what garners headlines, don't discount the updated suspension. The new independent rear end, even loaded with just a fraction of its maximum payload, is a dramatic improvement. Sure, some of that is thanks to the far lower center of gravity, but there's no arguing that a van that was already quite good to drive is now more stable, more predictable, and more agile than ever before.

Through tight bends, I was able to carry more speed and trust in this EVan's handling character. The ride is better, too, with far more compliance over bumps and fewer of the poor body-on-frame manners inherent in commercial vans. I hope Ford adds this suspension to the gas-powered Transit.

In August 2021, just a few months after opening reservations, Ford had already recorded 20,000 reservations. As of this writing, half of those have converted to orders, with over 300 small, medium, and large businesses signing on. That's in addition to a pilot program with Sonoma County farmers to evaluate the E-Transit, F-150 Lightning Pro, and the Ford Pro Intelligence telematics system. It's clear there's an appetite for an electric work van, even if the pre-order numbers aren't quite as explosive as we've come to expect from new EVs targeting retail customers.

For those companies, the E-Transit's zero-emissions operation, wealth of driver monitoring systems, and versatility outweigh concerns that would wear on your average car shopper, such as range or charging speed. I still don't know if being forced to work with an E-Transit on a regular basis will actually bring skilled tradespeople around to EVs – this van is, after all, focused first and foremost on the needs of businesses. But after sampling the E-Transit, I'm confident that Ford's latest electric product brings abilities to the table that businesses haven't had before. And by that standard, this electric commercial van is good work.

How Much Will The Ford E-Transit Cost?

Prices for the 2022 Ford E-Transit start at $48,880 (including a $1,695 destination charge) for a low-roof, short-wheelbase model. If you want the biggest cargo variant, a high-roof, extended-length model, you'll shell out at least $54,385. There are also cutaway and chassis-cab models.

The maximum range for the 2022 Ford E-Transit is 126 miles, but only for the regular-roof, short-wheelbase model. Ranges decrease thanks to roof height, with medium-roof models offering 116 miles of charge and high-roof variants covering just 108 miles.

How Long Does It Take To Charge The 2022 Ford E-Transit?

On a 240-volt outlet and at 48-amps – the maximum available in most applications – the E-Transit will go from 0 to 100 percent in about eight hours. A less aggressive 30-amp charge adds four hours to that number. The E-Transit's 115-kilowatt DC fast charging capacity allows it to go from 15 to 80 percent in 34 minutes.

Correction: A previous version of this review indicated a three-seat E-Transit would be available. This is inaccurate. The E-Transit will be a two-seater only, while Ford will continue to offer a three-abreast arrangement for the gas-powered van. Also, the 1,000 pounds in the back was to simulate a load, but was not a factor in tuning the suspension or estimating range.