The automaker’s first vehicle with a bed isn’t a hardcore truck, but it is very good.

When discussing the 2022 Hyundai Santa Cruz, the automaker is very careful not to call it a truck outright, preferring the term “Sport Activity Vehicle” instead. That’s because Hyundai would rather compare the funky little pickup with the likes of the Subaru Forester than the Nissan Frontier, with crossover-like drivability and fuel economy to go along with its miniature cargo box and techno-chic styling.

It’s also reasonably efficient, achieving at least 23 miles per gallon combined in EPA testing – getting that number in an currently available pickup would require sacrificing four-wheel drive or resorting to a pricey diesel engine, though the Maverick is coming soon and will offer up to 40 mpg. When it does, the Hyundai's 19 city/27 highway rating will have some very compelling competition.

While it's relatively thrifty, Hyundai also claims the Santa Cruz can really tow and haul. The company says it’s able to tug a compact travel trailer with a 5,000-pound towing capacity, and its 660-pound bed rating is enough for about 30 bags of mulch, both well within the parameters of what most pickup customers haul around on a regular basis. To find out if the 2022 Hyundai Santa Cruz is as slick as it looks on paper, we headed – where else – to the eponymous town in California to take it for a spin.

Unfortunately, we didn’t get the chance to sample the Santa Cruz’s towing or payload numbers, spending our day behind the wheel using it as most consumers will – driving nearly unladen through narrow city lanes and wide-open highway traffic. In this setting, the don’t-call-it-a-truck does very well. Our Limited HTRAC tester came with all-wheel drive and a standard turbocharged 2.5-liter inline-four, pushing a healthy 281 horsepower and 311 pound-feet through an eight-speed dual-clutch transmission. It all sounds like the perfect recipe for turbo-whistling, sideways-sliding, rally-style hilarity.

However, the Santa Cruz merely offers better-than-average performance. A torque plateau between 1,700 and 4,000 rpm offers plenty of grunt for a right turn into traffic or a freeway merge. But in spite of an output that shames the sporty Veloster N, this trucklet never feels very frenetic, serving up power in easy-to-digest doses. The same applies to the genteel automated transmission, which dispatches shifts well, but doesn’t throw much emotional heat. Performance is appropriate to the Santa Cruz’s mission as a commuter pickup, but the numbers had us expecting a little more sizzle (and excited for the prospect of an N or N-Line model).

Still, we couldn’t help but appreciate the pickup’s excellent road manners, even over rough and uneven pavement. The Santa Cruz isn’t a hot hatch, but it drives with more authority on a winding road than any other vehicle with a cargo box on the market. Bumps do little to upset the chassis, which feels stiff, sturdy, and up to the task of those aforementioned capability numbers. A smooth, quiet ride is another byproduct of the robust platform, allowing the suspension to provide comfort without sacrificing body control or handling.

Tidy proportions were yet another boon in our commute-imitating drive loop. Except for needing slightly more space when parallel-parking, the Santa Cruz felt very similar to the Tucson – one of our favorite crossovers on the market right now – with accurate steering and a light-on-its-feet nimbleness heretofore unseen among pickups.

Nowhere is the Hyundai Santa Cruz’s shared Tucson lineage more obvious than in the cabin, with a waterfall-style center stack rendered in fingerprint-prone glossy black plastic. The swooping dash design is also common between the two, as are a standard 8.0-inch or optional 10.3-inch infotainment display, available 10.3-inch digital instrument cluster, and capacitive-touch climate controls and audio buttons. However, the pickup does get a traditional shifter with a manual gate instead of push-button transmission controls.

As such, our praise and condemnation for the Tucson’s interior carry over almost unscathed. On the plus side, the infotainment is responsive and simple to use, with intuitively stacked menus and a short learning curve. Information from the digital gauges is easy to scrutinize as well. Unfortunately, wireless Apple CarPlay and Android Auto are standard on the 8.0-inch display but inexplicably unavailable with the larger screen, which requires a wired connection. And the touch-sensitive volume sliders and climate control “buttons” are impossible to use without looking. Generally though, the Santa Cruz is an easy vehicle to operate.

Improving matters more is a front cabin that’s spacious and comfortable. The seat bottoms are a bit thin on support (as we noted in our comparison of the Tucson and Nissan Rogue), but otherwise, the front seats of the Santa Cruz Limited adjust to a variety of frames thanks to eight-way power adjustability and four-way lumbar support. Standard heating and ventilation on the top trim adds to the appeal, particularly for those whose outdoor activities find them in extreme climates.

Alas, rear-seat passengers get the short shrift – almost literally. While the Tucson offers surprisingly good legroom, the Santa Cruz isn’t nearly as spacious back there. To Hyundai’s credit, the rear backrest is set at a much more comfortable angle than that of the larger Nissan Frontier or Toyota Tacoma, but there’s not much space for this 6-foot author to “sit behind himself,” as it were. A squad of four adults could get comfortable if the front-seat occupants are willing to skootch forward a bit, but if not, rear-seaters should get accustomed to their knees brushing those seatback map pockets. 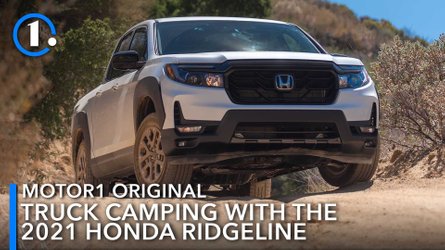 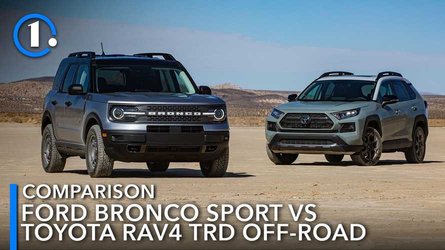 The 2022 Hyundai Santa Cruz takes clear design inspiration from the Tucson, but the two share precious few visible parts. The pickup’s hidden-LED front end treatment is similar, but a higher hood and blockier fenders subconsciously mark it as the more rugged offering. The headlight nacelles and lower air intake are also squared off on the Santa Cruz, and the round wheel arches get plastic cladding that angles in, not out – unusual for a truck. Little notches right above the wheel wells feature a cute little Santa Cruz silhouette that also appears on the bumper step and bed rails.

Triangular bodyside surfacing is a clear callback to the Elantra, giving the Santa Cruz a personality all its own. Ditto the un-trucklike C-pillar that blends into commendably low bed rails, which make reaching into the cargo box very easy. LED taillight accents stretch almost all the way across the tailgate, which imparts more visual width than boxier truck designs according to Hyundai. Indeed, the Santa Cruz is unlike any other pickup ever sold, with styling that onlookers will either love or hate. Count us in the first camp; we never got tired of admiring the little truck’s curves and edges. 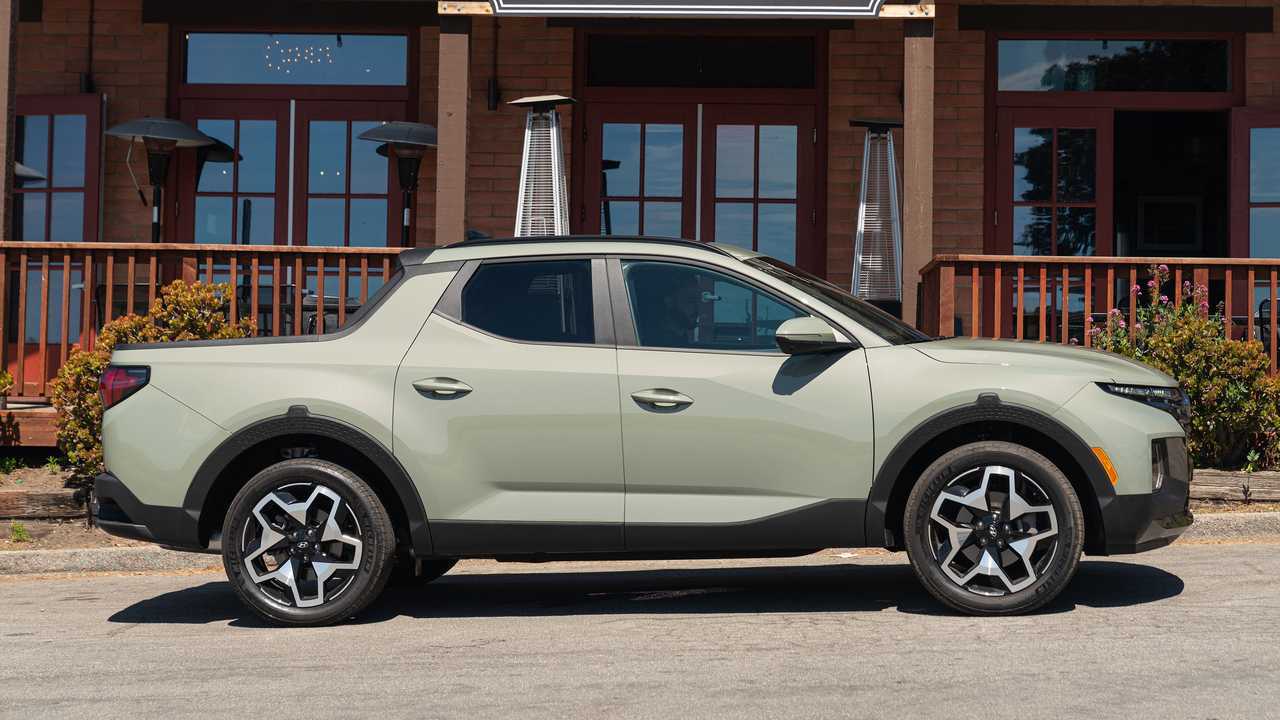 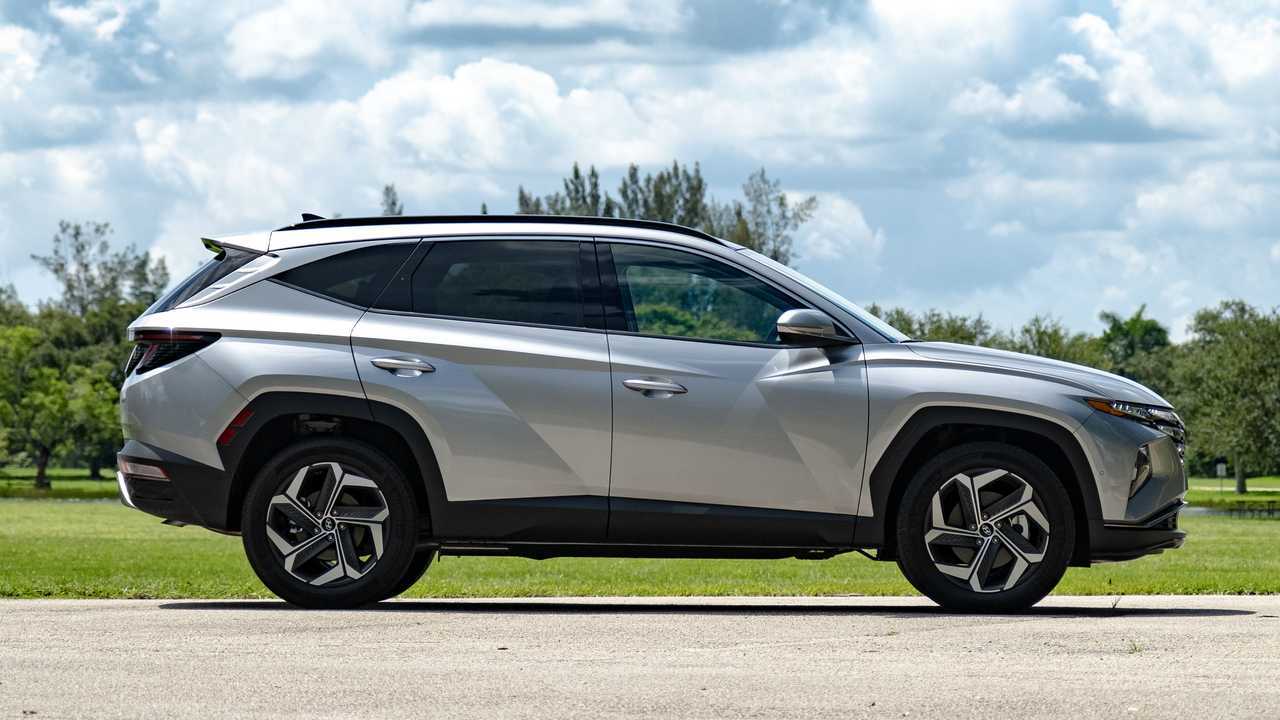 We’re going to get the obvious complaints about the party end of the 2022 Santa Cruz out of the way now. At 4-foot-4, the cargo box is definitely short, limiting its usefulness. Hyundai also missed an opportunity to dial in some utility via a Toyota Tundra–style roll-down rear window or a folding bulkhead a la Chevrolet Avalanche. Instead of those engineering-heavy solutions, the automaker instead demands that owners drop the tailgate if they want to haul longer cargo like lumber or dirt bikes. Luckily, there are a number of neat tricks on the back of the Santa Cruz to make those jobs easier.

For starters, the tailgate itself can lock into a partially up position, aligning with the tops of the wheelhouses so that 4x8 sheets of plywood lie perfectly flat (though they extend out the back by about 3 feet). There are notches in the composite bed that can host 2x4 or 2x6 pieces of wood, allowing owners to create their own tiered storage solutions. Two small bins, one on each side of the bed, are great for tie-downs and other small items, and the SEL Premium and Limited trims add a 115-volt outlet in the passenger-side cubby for camp- or worksite appliances.

If those features sound familiar, that’s because we first encountered them in our time with the Ford Maverick, whose bed is 2 inches longer. However, the Santa Cruz has one ace in the hole that we’re sure has Blue Oval engineers smacking their foreheads. An under-bed trunk provides waterproof, locking storage for a duffel bag or a few backpacks, and it has drain plugs that allow it to serve as a cooler – fill it with ice, then just let it melt out. The Hyundai also offers an integrated tonneau cover that’s factory-installed, while the Maverick’s is a dealer accessory instead.

While the Santa Cruz’s bed is undoubtedly rather small, it makes exceptional use of that space, and Hyundai says it can accommodate a 250cc motorcycle or two mountain bikes with the tonneau removed. The automaker also brags that a pair of snowboards and related gear will fit in the box with the tonneau in place, leaving your stuff snow-free until it’s time to ride – perfect for the weekend adventurer.

What’s Not To Love?

The 2022 Hyundai Santa Cruz had us won over within a few miles of setting off in the morning, and that appreciation only grew over the course of our day with the trucklet. No, it’s not much of an off-roader, and no, it can’t tow a pleasure yacht. Instead, it offers excellent road manners and computer-indicated fuel economy of 22 miles per gallon in hilly driving, with clever storage solutions that make the most of its city-friendly proportions. Many folks might be better served by the Santa Cruz over a similarly priced crossover given its added cargo versatility – as long as they’re willing to miss out on some backseat space.

Speaking of price, the Hyundai pickup starts at $23,990 (plus $1,185 destination) in SE form with front-wheel drive. That trim gets a naturally aspirated 2.5-liter four with 191 hp and 181 lb-ft, as well as standard forward collision monitoring, automatic emergency braking, lane-keep assist, and wireless smartphone integration. The mid-level SEL adds blind-spot monitoring, a power driver’s seat, and other goodies for $27,190. All-wheel drive is a $1,500 proposition on either.

Meanwhile, all-wheel drive and the 2.5-liter turbo engine are standard on the SEL Premium ($35,680) and Limited ($39,720). Our top-dog tester’s only options were $400 Sage Gray paint and $185 floor mats, bringing the total to a pretty gasping $41,500, uncomfortably close to the Nissan Frontier Pro-4X and Toyota Tacoma TRD Pro – and more than the Taco TRD Off-Road. Optioned with a bit more restraint, a $38,000 SEL Premium would be a better buy, and a $28,000 SE with all-wheel drive should be a no-brainer to shoppers who’d otherwise be stuck in a boring crossover with limited versatility.

Even in its priciest form, the 2022 Hyundai Santa Cruz left us with a newfound appetite for small pickups. We can’t wait to see how it stacks up against the similarly sized, 40-mpg-estimated Ford Maverick Hybrid FWD or 250-hp Maverick EcoBoost AWD. Whatever the outcome of that particular matchup, the Santa Cruz is an exemplar of adventuring versatility and everyday usability, and the whole truck market should take notice.