Finally a competitive three-row from Nissan.

While it may look totally new, the Motor1.com Star Award-nominated 2022 Nissan Pathfinder hasn't completely ripped up last year's blueprints. From a mechanical standpoint, nearly everything is the same – the continuously variable transmission is the only thing that Nissan switched out, praise be. But you wouldn't know this was a refresh simply by looking at it.

The 2022 Pathfinder's sharp styling is a stark contrast to its predecessor's bulbous cues. The cabin feels upscale and modern, finally. And Nissan engineers made thoughtful tweaks to the chassis, engine, and drive modes that make this three-row that much more capable. Combine those fresh elements with everything you love about a three-row crossover – comfort, space, and livability – and the 2022 Pathfinder is now a top choice in a very competitive class.

The Nissan Pathfinder isn't the flashiest crossover, but it did garner a surprising amount of praise from onlookers who called it sharp and handsome. The brand's V-Motion grille acts as the focal point of the front end, surrounded by a chunky chrome finish and dotted on either side by headlights with a swoosh-like lighting detail. The Scarlet Ember exterior paint on our tester gets a contrasting black roof that we quite like, even though it costs an extra $745.

The Pathfinder's side profile is tapered high and tight (with a floating-roof effect, naturally), the wheel wells have chunky cladding, and buyers get the choice of 18-, 19-, or 20-inch rims depending on trim. Our Platinum tester comes standard with the lattermost option. The back of this Nissan is our favorite angle; a bold "PATHFINDER" wordmark stretches the length of the trunk lid, slim LED taillights line each corner, and a silver trim piece sits low on the bumper around the license plate.

Beyond the sharp detailing on the touchscreen housing and the new rounded drive mode selector in the center console, the inside of the Pathfinder looks familiar. The optional 9.0-inch touchscreen and 12.3-inch digital instrument cluster are carryovers from the smaller Rogue, as are the flat-bottomed steering wheel and gear shifter. But the borrowed pieces aren't necessarily a bad thing; the clean styling and solid ergonomics of this cabin design make the Rogue and Pathfinder equally great in this respect.

Nissan doesn't specify whether the Pathfinder's front buckets are "Zero Gravity," but they're pretty darn good nonetheless. The semi-aniline leather is cushy, the seats themselves contour well to the body, and the shape offers plenty of support over long distances. And on this Platinum model, both heating and ventilation come standard.

The second row offers the choice of either a traditional three-seat bench or two captain's chairs – our tester, like every Platinum trim, comes with the latter. Just like the front seats, the leather buckets in the second row are comfy, plus they offer armrests and a center console with two cupholders and cell phone storage. And that center console is easily removable; a button at the front of the console lets you detach it from the floorboard with one press.

You will have to sacrifice some space, though, for these features. Neither the Pathfinder's 38.4 inches of headroom nor 35.5 inches of legroom in the second row are best in class. The legroom figure is especially low – both the Hyundai Palisade and Kia Telluride offer 42.4 inches of legroom, for example. But that's not to say that the Pathfinder's second row isn't comfortable enough. Your 6-foot-tall author found it to be plenty roomy. 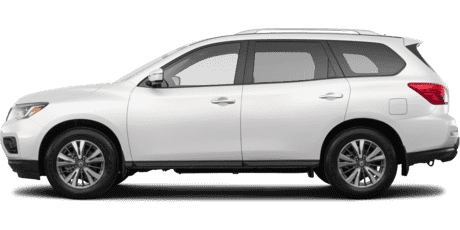 Access to the Pathfinder's third row is a cinch. Either remove the center console and slink between the two captain's chairs or use Nissan's clever EZ-Flex second-row seat mechanism that tilts and folds the chairs forward with the press of a button. It even works with an unoccupied child restraint (note: there is a weight sensor that determines if anyone is in the car seat and locks the function if so).

The third row isn't our definition of roomy, offering just 28.0 inches of legroom. Long-legged passengers (like yours truly) won't be happy back there over longer bouts. But headroom, hip room, and shoulder room are all solid, beating spacious alternatives like the Hyundai Palisade.

Akin to the borrowed interior design, most of the tech inside of the Pathfinder is familiar. The same 12.3-inch digital cluster, 9.0 touchscreen, and 10.8-inch head-up display from the range-topping Rogue Platinum carry over. The digital cluster and HUD are exclusive to the Platinum model, while the larger touchscreen is available on the SL as well.

The same NissanConnect user interface from the Rogue carries over, too, including wireless Apple CarPlay (Android Auto is still a wired connection), a Wi-Fi hotspot, and wireless charging. NissanConnect can be laggy and the home screen is jumbled, so it's not our favorite UI, but the screen itself looks nice, with an Android Auto projection that is clear as can be. We just wish there was a wireless connection for Android like there is Apple.

Throughout the cabin, there are six USB ports. The first two rows have one USB-A and one USB-C, while the third row opts for a pair of USB-A ports exclusively. Either way, everyone in the cabin should be able to plug in most of the time.

Powering the Pathfinder is a perfectly fine 3.5-liter V6 that produces 284 horsepower and 259 pound-feet. This engine is a carryover from the previous generation, with no updates to power or torque – but it's not like the Pathfinder yearned for more oomph anyway. The most welcomed update is the transmission; Nissan swapped the old and whiny CVT for a much nicer nine-speed automatic. Now the gearbox feels smoother and more refined, with better (and genuine) shifts.

The platform underneath the new Pathfinder is the same as last year's, too, which means little change in the way of driving dynamics. The ride is borderline too stiff for this segment (maybe it's the 20-inch wheels, maybe it's the static dampers), but the Pathfinder is competent around turns. And although the steering is heavily boosted, it doesn't feel numb.

As with many modern crossovers, Nissan pitches the Pathfinder with some basic off-road chops. And with Sand, Mud/Rut, and Snow modes alongside the traditional Normal and Eco options, the Pathfinder will transfer power accordingly in slippery situations. Plus its 7.1 inches of ground clearance is just enough for basic soft-roading. Don't expect this thing to conquer the Rubicon Trail, but the Pathfinder is confident in low-traction situations like heavy rain, mud, and based on our first drive, snow.

The SV models and above also get Nissan's lauded ProPilot Assist adaptive cruise control, while the SL and Platinum trims get enhanced navigation-linked cruise control, which monitors road conditions and is able to slow for turns and bends. We've said it before and we'll say it again: ProPilot is one of the best mainstream advanced safety systems, and after driving the Pathfinder, our fondness for it grows even stronger.

Ticking the blue ProPilot Assist button on the steering wheel activates automatic steering inputs, lane-centering, braking, and acceleration. ProPilot works wonderfully, keeping the Pathfinder centered in the lane on the highway with minimal interference from the driver and braking the vehicle smoothly all the way down to zero.

The Pathfinder Platinum with four-wheel drive achieves 20 miles per gallon city, 25 highway, and 22 combined. We recorded around 20 mpg combined in a mix of city and highway driving. Technically the Platinum model is the least efficient trim of the group – both the two-wheel-drive models and the non-Platinum 4WD models achieve up to 23 combined. But even with all-wheel drive, the Pathfinder is still one of the more efficient options in the segment.

Both the Kia Telluride and Hyundai Palisade return 21 mpg combined with all-wheel drive, while Nissan matches the efficiency of the Honda Pilot and Dodge Durango, both with 22 mpg combined. Only the Toyota Highlander and Ford Explorer are more efficient, returning 24 mpg combined.

Minus a few factory-installed options like running boards and crossbars, this Pathfinder is essentially loaded. An equally spec'd Kia Telluride SX Prestige (without the Nightfall Edition package) asks just over $48,000, while a luxurious Palisade Calligraphy costs about the same with every option. The Honda Pilot and Ford Explorer, meanwhile, will crest $50,000 with the right amount of options.

Even though it's one of the pricier options of the bunch, the Pathfinder does present a solid value for all that you get. If you do want to save some cash, you can opt for 2WD and shed $1,900 from the asking price, and there are a handful of paint options that don't cost extra. Furthermore, the well-equipped, leather-trimmed Pathfinder SL starts at $40,740 if you don’t need the panoramic moonroof, quilted upholstery, and flashy wheels of the Platinum.