The BMW M235i Gran Coupe is not the same car as the 2 Series Coupe. Not even close. The two vehicles don't share the same platform, visual cues, or even engines. The M235i GC and the 2 Series Coupe are only vaguely related by name – and that's unfortunate. Because while rear-drive, two-door model is sporty and dynamic, the M235i GC is neither.

The M235i GC rides atop BMW’s modular front-wheel-drive architecture, making it a relative of the European 1 Series and the Mini Hardtop. And though it uses all-wheel-drive here in the US (compared to front-wheel drive in Europe), the GC lacks the athleticism we’ve come to expect from an M-badged BMW (even one of the lesser M Performance models). This car also borrows its visual cues from that same Euro variant, but neither of them are outrightly attractive.

At a minimum, the BMW M235i GC has good in-car tech, solid safety features, and a fantastic engine, the most powerful four-cylinder the company has ever built. But even with a handful of positives, the BMW M235i GC still leaves a lot to be desired.

If we had to describe the BMW M235i Gran Coupe in one word it'd be: frumpy. There are some good elements, like the bronze-colored kidney grille and mirror surrounds (M Sport exclusives), the downturned LED headlights, and the subtle ducktail spoiler out back, all of which look nice on their own.

Problem is, the M235i GC is a small car, and all of those features feel designed for a larger vehicle. The long headlights, oversized kidney grille, and daunting lower vent take up a huge amount of real estate on the front fascia. The horizontal taillights, meanwhile, extended way out over the rear fenders, and the optional 19-inch V-spoke wheels on our tester (a $600 option) give the 2 Series the proportions of a Matchbox car – and not in a good way. At a minimum, stick with one of the four standard 18-inch wheel options.

At least the cabin is less polarizing. Elements we've come to love on other BMW models – like the big 10.3-inch touchscreen, the digital instrument cluster, and the clean housing for the gear lever and drive modes – all carry over to the smaller M235i. Plus our tester gets bright Magma Red perforated leather on the seats and a nice contrasting black leather on the dash and steering wheel.

Even though it is very compact on the outside, the BMW M235i Gran Coupe's front compartment is open and airy, with plenty of space to stretch out. On paper, the BMW's 38.2 inches of front headroom and 41.4 inches of legroom are about par for the class, even if the Cadillac CT4-V is a bit better (38.3 / 42.4 inches). The M235i also comes standard with 10-way power-adjustable M Sport front seats (a $750 option) with a memory function, which further enhance the experience.

But like a lot of compact sedans, the back seat is where the BMW struggles. The second row feels tight, headroom especially, and it's difficult to get in and out with such a narrow entryway. The M235i's 35.6 inches of overhead space are among the worst in the class. The BMW has a bit more legroom than some of the others – 34.4 inches – but an average adult might still hit their knees on the front seatback. The second row of the 2 Series GC just isn't a comfortable place to sit over long stretches of driving.

Sound deadening isn't the best, either. Road and tire noise in the M235i Gran Coupe are hugely intrusive, especially on the highway. We give some blame to the optional 19-inch wheels and rubber band-thin tire sidewalls on our tester for the latter issue – the standard 18-inchers with a bit more rubber might be less offensive. And the ride itself is harsh; even over smooth pavement, you can feel every bump and divot.

The BMW M235i Gran Coupe comes standard with an 8.8-inch touchscreen and standard analog gauges. But the $2,750 Premium Package (as optioned on our tester) adds BMW's Live Cockpit Pro with navigation, which includes a crisp 10.3-inch touchscreen, a 10.3-inch digital instrument cluster, and a head-up display.

That optional setup also adds wireless Apple CarPlay and Android Auto. Though we've been critical of BMW's wireless setup in the past, it's faultless here. CarPlay connected instantly and without hassle every time we jumped in the car. And with the $500 wireless charger option included, it made wires a thing of the past.

But as is the problem with many BMW products, a lot of these features are pricey extras whereas some competitors offer them standard. The Premium Package and wireless charger alone add $3,250 onto the final asking price, while our tester also gets the $950 Driving Assistance package and the $875 Harmon Kardon premium sound system. And that doesn't include the $190 Gesture Control option. 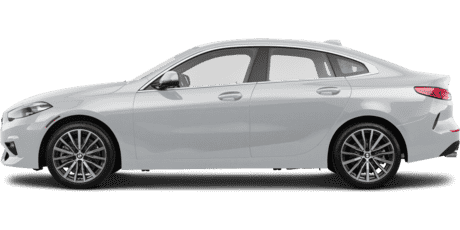 The BMW M235i Gran Coupe's twin-turbocharged 2.0-liter is a hugely impressive little engine. With 306-horsepower and 332 pound-feet, it’s BMW's most-powerful four-cylinder ever – and it certainly lives up to the title. Tick the drive mode selector to Sport, smash the gas pedal, and the little 2 Series rockets off the line with so much force that it feels like there's a six-cylinder underhood. The M235i has gobs of low-end torque and sounds great from a standstill, but it also offers lots of power higher in the rev range for high-speed highway passing.

An eight-speed automatic is the lone transmission option for the M235i, and it’s fine. In Sport mode, the gearbox shifts crisply and quickly enough without having to pull on the paddle shifters – but even if you do play with the paddles, it doesn’t respond any more eagerly. In Comfort mode, the eight-speed can be a bit sluggish on downshifts especially, but it’s far from offensive.

The problem, then, isn't the gearbox – it's the platform. The 2 Series Gran Coupe uses a front-wheel-drive architecture, same as the Mini Clubman, that just doesn't feel as dynamic as its rear-drive counterparts. And while the average consumer probably won't notice the difference, hardcore enthusiasts will likely be able to point out some of the same issues we experienced both in our first drive review and here: bad torque steer (even with power at all four wheels), terminal understeer, and completely numb steering made worse by a steering wheel that feels unusually thick, even for an M car.

The M235i Gran Coupe comes standard with BMW’s Active Driving Assistant, which includes a forward-collision warning, automatic emergency braking, blind-spot monitoring, lane-departure warning with lane-keep assist, and rear cross-traffic alert. The great thing about the Active Driving Assistant is that it’s customizable, meaning you can adjust or turn off individual features while keeping others on.

In our case, we found BMW’s lane-keep assist option to be too intrusive. The safety feature aggressively forced the 2 Series back to center, even with the slightest movement out of the lane. Thankfully, a big button just below the infotainment screen makes it easy to shut off this feature and all the others entirely, which happened more than frequently.

The only safety option our tester lacked was the full-on Driving Assistance Package, a $950 option. That package adds the active parking assistant and adaptive cruise control with full stop-and-go functionality.

For the segment, though, only one car is more efficient than the M235i Gran Coupe: The Mercedes-AMG A35, which nets 27 mpg combined. Alternatives like the CLA 35 (25 combined), the Audi S3 (25 combined), and the CT4-V (23 combined) are all less efficient.

With options, our M235i Gran Coupe tester costs $51,295 (the most expensive 2 Series Gran Coupe costs $56,810). The most expensive option is the Premium Package, which adds a heated steering wheel, adaptive LED headlights, a head-up display, and a Live Cockpit with a digital instrument cluster for $2,650. The M Sport front seats are an extra $750, the 19-inch wheels are another $600, heated front seats are $500, and remote start is $300 – plus add $995 in destination charges.