2021 Toyota Sienna First Drive Review: Give It A Chance 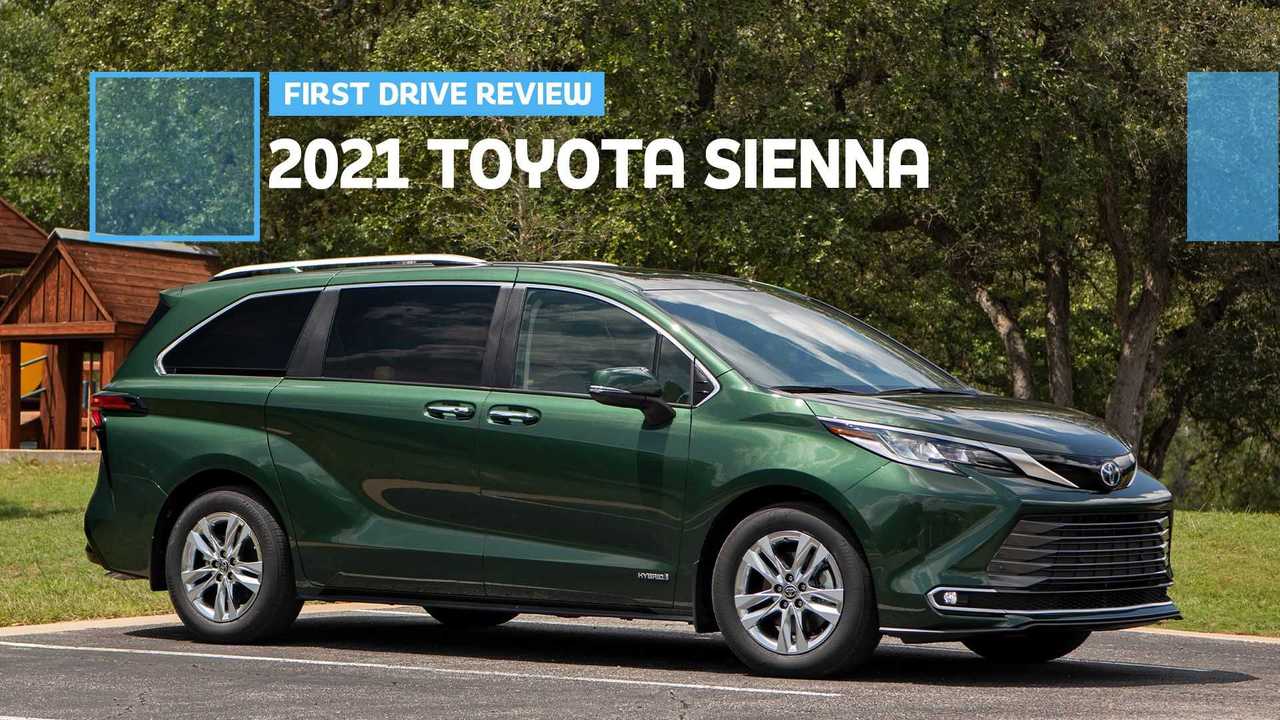 Don’t buy that crossover until you at least look at the new Toyota Sienna.

Why don't people buy minivans? There are two pretty simple answers. The first being that minivans just don't look cool – or at least, they don't look as cool as their crossover counterparts. The second reason is that minivans have a bad reputation. A lot of people don't want to be seen in so-called daddy-mobiles or mommy-mobiles – they'd rather drive a sleeker SUV, even if it only does a fraction of the job.

But you should at least consider a minivan for your next purchase instead of that SUV, specifically the 2021 Toyota Sienna. The Sienna has everything you want and more: plenty of passenger space, solid cargo room, great fuel economy, and lots of technology and safety. Plus the Sienna drives better than many crossovers and SUVs we've tested, and with a standard hybrid powertrain for 2021, it's more efficient, too.

Other Minivans To Consider:

The 2021 Sienna now comes standard with a 2.5-liter four-cylinder hybrid powertrain across all trims. This is the first minivan in the US to move exclusively to hybrid power, and we definitely don't long for the larger, less efficient V6 of yore – especially when the new Sienna returns such impressive fuel economy. Our all-wheel-drive tester achieves 35 miles per gallon city, 36 highway, and 35 combined, while the front-wheel-drive model nets a 36 combined. There’s also a dedicated low-speed EV mode, but it really only works below 10 miles per hour. Compared to three-row crossovers, only the Sienna’s sibling – the Toyota Highlander Hybrid – is as efficient (36 mpg combined).

Not only is that powertrain efficient, the hybrid four-cylinder's 245 horsepower and 199 pound-feet, matched with lots of low-end torque from the 1.9-kilowatt-hour battery, give this van plenty of oomph. The Sienna accelerates with solid verve, producing more than enough power for easy highway passes and spirited city driving. And the continuously variable transmission is totally inoffensive. Our only complaint is that the transition between the gas engine and electric motors can sound harsh, but it's only an issue when you really give it the beans (and most customers probably won't do that often).

This is the first minivan in the US to move exclusively to hybrid power, and we definitely don't long for the larger, less efficient V6 of yore.

The Sienna also handles pretty well, or at least better than many of the three-row SUVs and crossovers we've driven, which tend to feel wafty in corners. Smooth and flat typically aren't words we'd use to describe a minivan’s handling, but it's true of the Sienna. The steering feels a bit overboosted, but otherwise, it’s pinpoint accurate and direct, and with the optional all-wheel-drive setup on our tester, this minivan has lots of grip.

The Sienna drives more like an oversized sedan than it does an SUV – which is a good thing. The relatively low seating position and driver-centric cockpit make the Sienna feel more comfortable on-road and surprisingly easy to maneuver. This minivan certainly doesn’t drive as big as its overall length (17.0 feet) and curb weight (4,725 pounds) suggest. For reference, the Sienna is longer and heavier than many three-row SUVs.

Toyota really wanted to make the Sienna look cool, an attempt to combat that earlier point we mentioned. And the Sienna does look cool… ish. On the front end, designers affixed a massive grille, hook-shaped headlights, and a long hood. The side profile has lots of sharp creases and a strong haunch that extends up and over the rear fender, and the taillights have a nice contour to them, wrapping around a bold "SIENNA" wordmark that stretches nearly the width of the liftgate.

Without context, the new Sienna looks good, specifically the high-spec Limited tested here (only the Platinum sits above it in the van’s trim hierarchy). This model has nice 18-inch chrome wheels, vertical grille inserts with chrome accents, standard LED headlights and taillights, and an eye-catching Ruby Pearl Flare paint job, a $395 option. But in a world where something like the Kia Telluride exists, the Sienna still looks like a minivan. It's a good-looking minivan, but a minivan nonetheless.

Great For (Up To) Eight

The interior of the Sienna needs no caveats – actually, it's very nice. Leather-trimmed, heated and ventilated front seats with eight-way power adjustability on the driver’s side come standard on the Limited, while silvery accents cover the dash and steering wheel and soft-touch materials envelop the rest. The cabin feels high-end or close to it. Plus there’s ample storage space, the mark of any good minivan; a huge shelf-like fixture extends the width of the dash for holding cell phones and keys, there’s a big cubby underneath the gear lever housing, and a "bridge center console" offers room for four American-sized cups and storage for things like smartphones and tablets.

Toyota offers the choice of either eight-passenger seating with a second-row bench or seven-passenger seating with a second-row captain’s chairs. But weirdly, the seating options vary depending on trims and wheels driven. For example, the base LE comes standard with the second-row bench, but that arrangement is only available as an option on the front-drive XLE , not all-wheel drive. XSE models and above, including our all-wheel-drive Limited tester, get the captain’s chairs exclusively – but we’re not complaining.

The second-row captain’s chairs are supremely comfortable, with the same leather finish and form-fitting contour as the front seats. There’seven a full-recline feature with a built-in footrest. Those seats also slide fore and aft up to 25 inches, meaning with no one in the third row, an average-sized adult can stretch their legs out fully – and it also makes access to the third row a cinch. And the third row is super roomy comparatively; the Sienna has 38.7 inches of legroom, more than any comparable crossover.

The Sienna also excels in carrying cargo. With all three seats folded flat, the Toyota minivan has up to 101.0 cubic of room. And with the second row flat, there’s a hearty 75.2 cubic feet. But even with all three rows up, there’s still a class-leading 33.5 cubic feet of room behind the third row.

A 9.0-inch touchscreen with Apple CarPlay, Android Auto, and Amazon Alexa compatibility comes standard on all models, as does in-car Wi-Fi with two free months of service. The screen is crisp, concise, and easy to navigate, and the updated version of Toyota’s less-than-stellar Entune system is much cleaner than the needlessly complicated setup of the Highlander, even if you don’t get the Highlander’s bigger screen. The only thing the Sienna lacks is split-screen functionality, which we can live without.

The Limited and Platinum models also get a 7.0-inch screen within the instrument cluster, an improvement over the standard 4.2-inch screen. The larger interface makes it easy to see things like the odometer, trip information, fuel economy, and more without having to dig into the central touchscreen. And available on our car is the optional rearview camera mirror, which offers a wider view of what’s behind you, but it’s not crystal clear and gets easily obstructed by rain. Still, it’s better than trying to navigate out of the tiny rear window.

There are a total of seven USB ports located throughout the cabin, including one directly adjacent to the steering wheel for smartphone connectivity. The Sienna also offers Qi wireless charging standard on Limited and Platinum models. And the piece de resistance: a built-in vacuum cleaner located in the trunk, similar to the Honda Odyssey’s HondaVac.

In terms of safety, every Sienna comes standard with Toyota Safety Sense 2.0, which includes things like adaptive cruise control, lane-centering assist, automatic emergency braking with pedestrian detection, and road-sign assist. Though we’ve seen this safety tech on Toyota products before, the company touts improvements to specific elements like following distance and acceleration in the Sienna. And the system works well, keeping the car centered in the lane and maintaining a steady pace with the vehicle in front of it.

At the end of the day, you could buy a crossover – and the numbers suggest you probably will. Minivans make up just two percent of the total market share in the US, and it’s getting worse every year. But the minivan’s bad reputation is undeserved. The 2021 Toyota Sienna is a great family vehicle and better than many of the SUV alternatives, offering easy-to-access seating for up to eight, great in-car technology, safety and storage in spades, and solid dynamics. And it’s efficient, returning 35 mpg city, 36 highway, and 35 combined with all-wheel drive. Sure, it may not be the "coolest" option, but the 2021 Sienna is easily one of the best.