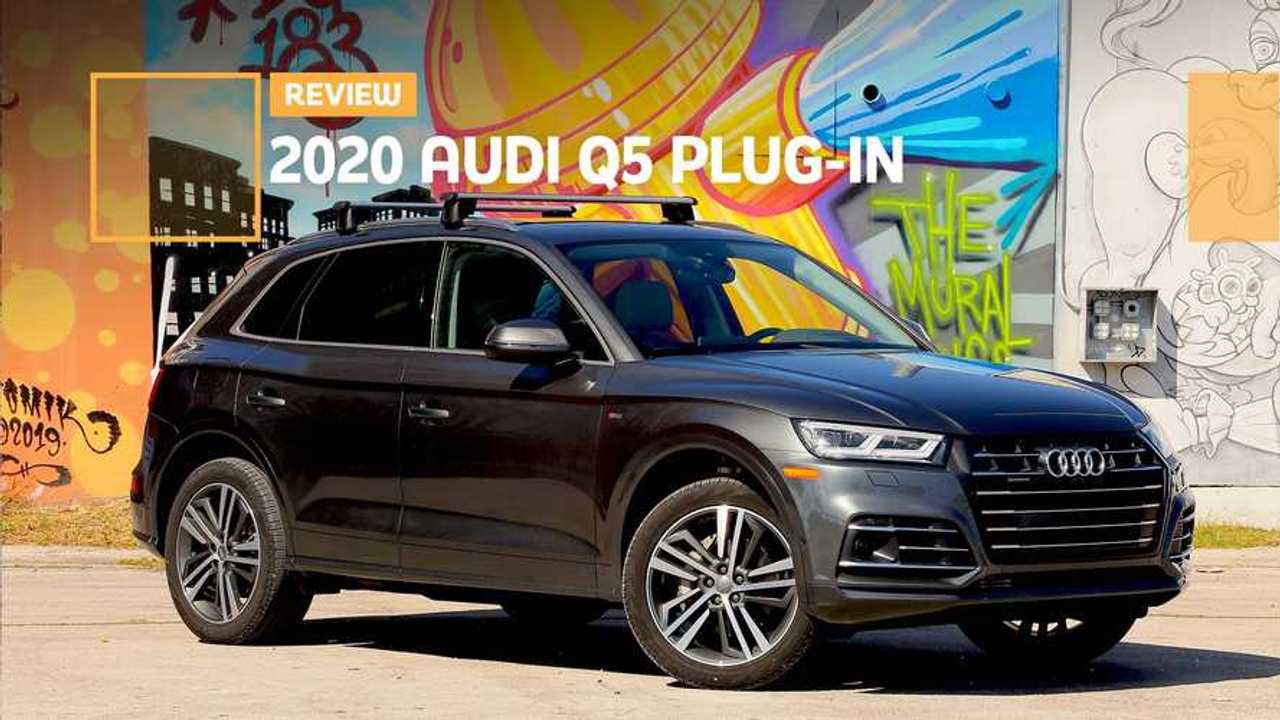 A month of living with Audi’s midsize plug-in.

After nearly two years of running the Motor1.com long-term test fleet, we’ve covered everything from the adorable Mazda3 hatchback to the family-friendly Honda Pilot. With our latest long-term candidate, we’re shaking up the recipe, testing our first premium brand, and first plug-in. Specifically, we’re spending a few months behind the wheel of the 2020 Audi Q5 plug-in hybrid, living with the car every day just like those who will buy it. With over 1,500 miles on the odometer, it’s time to divulge our initial thoughts.

The so-called "Q5 55 TFSI e Quattro" and its closest competitors – the Volvo XC60 T8, BMW X3 xDrive30e, and Mercedes GLC 350e – are on a mission to entice buyers away from their gas-only counterparts. Plug-in hybrids are slowly but surely gaining interest from consumers but often come with bigger price tags. Our goal in testing this car for a few months is to determine whether or not the car actually lives up to its on-paper potential, especially in terms of efficiency.

The Q5 variant is one of two plug-in hybrids in Audi’s American fleet of cars, the other being the A8 sedan. It uses the same turbocharged 2.0-liter four-cylinder as other Q5 models, but also packs a 14.1-kilowatt-hour battery pack along with it, and Quattro all-wheel drive comes standard.

The Audi charges with relative quickness. With a 240-volt charger, it will fill in two hours and a half hours. 110-volt charging is available, but takes several more hours to juice up.

This combo of gas and electricity makes this the most powerful and most efficient Q5 on sale, with a combined output of 362 horsepower and 369 pound-feet. Fun fact, this car is even more powerful than the decidedly sportier SQ5. Even so, the Audi focuses on delivering an efficient driving experience, not a lively one.

Since the EPA rates plug-in hybrids with confusing mpge (short for “mile per gallon equivalent”) ratings, our real-world numbers should help to simplify things. The Q5 plug-in achieves 65 MPGe and a projected total range of 410 miles with a full charge and brimmed tank of gas. More specifically, the EPA says that the car pulls off 20 miles of electric-only range, and when the battery is dead, the car is good for 27 mpg combined.

After weeks of consistent use, with mostly city and some highway driving, we’re happy to report that the Q5 actually outperformed its own ratings. In EV Mode, which avoids using the gas engine unless you absolutely floor it, the Q5 drove 23 miles of all-electric range, and not just once. We ran the test multiple times with different driving routes and traffic patterns and each time we managed 22-23 miles.

We did better than expected with a flat battery too: Over several tests, the car netted 29.3 combined mpg on average, according to its trip computer. Running up the score once more, the Audi did 417 miles after burning through a tank of gas and a full charge. It probably could’ve gone further, but we just didn’t feel like pushing it to a gas station. So there’s the abridged nerd-out on the plug-in and a great start in making the case for this vehicle.

In terms of actual driving experience, the Q5 is one of the most easy-going cars we’ve sampled all year. When testing a plug-in hybrid, job one is determining if there is any bad behavior when the powertrain switches from electric to gas propulsion. The Audi does well, with a smooth, borderline-seamless transition when the four-cylinder wakes up. Only under hard acceleration does the transition feel harsh. But in 90 percent of driving scenarios, the under-hood components are hardly noticeable. And with the sizable battery onboard juiced up, the engine seldom has to step in during casual driving – you can also drive at highway speed without using a drop of gas, up to 85 miles per hour.

Highway cruising is where the Audi is at its best. Whether under electric or gas power, noise levels are low all around. The same goes for road noise and most other disturbances – the Q5 quietly chugs along with an eye for comfort, and we’re A-ok with that. It features overboosted electric steering, which is feather-lite to control. The non-adaptive suspension provides a supple ride quality that only falters when met with sizable obstructions in the road.

Thanks to instant reaction from the electric boost, the Q5 accelerates faster than you’d expect it to. With the car charged up, it takes roughly 50 percent throttle input to wake the engine, otherwise it’s all up to the battery. At roughly 4,700 pounds it’s not exactly fast, but the Audi is great for short acceleration bursts when needed (which is true of most EVs). Carry too much speed into a corner, however, and the Q5 is quick to remind that this is far from an S or RS product. All-wheel drive coupled with that supple suspension tuning gives the Q5 an understeer-first personality, featuring prominent body roll.

The biggest knock against this car is the facelifted 2021 Q5, which now exists. That newer model brings subtle revisions to the exterior and a touchscreen to the interior, but the changes aren’t enough to make the 2020 model irrelevant. Our pre-facelift model features handsome styling with sharp body lines and a nice shade of Daytona Gray pearl paint.

It wouldn’t be an Audi without some trick lighting signatures in both the headlights and taillights, along with cues like the black and chrome hexagonal grille and chrome detailing that mimics fake exhaust pipes, which the plug-in steals from the SQ5. We opted for the $800 20-inch wheels and the awesome $296 roof rack accessory, each of which adds a little flavor to a design that’s down on drama compared to other Audi products.

The same is true of the cabin, which is more functional than it is eye-catching. Maybe it’s the Rock Gray interior color and Ash Gray wood trim pieces, but the Q5 could use a little jolt of excitement. We drove a Q3 with frickin’ orange suede on the dash – Audi knows how to have fun, and that’s not so much the case here.

There’s good news in that everything feels high-quality and comfortable, save a few hard plastic touchpoints that are all below the driver’s torso. Passenger space is excellent in the front two seats, with lots of headroom and decent legroom. In back, things are a bit tighter for tall folks, but we’ve had two 6-foot-tall passengers ride for hours without a peep from either. Maybe they were too busy looking at the ambient lighting, which gives the interior an elegant glow at night.

We sprung for the Prestige trim level, which comes with a $7,450 price hike. It also brings a straight-up treasure chest worth of options. The highlights include a killer 19-speaker Bang & Olufsen sound system, a huge panoramic sunroof, adaptive cruise control, wireless phone charging, and a 360-degree camera with park assist, among some lesser features.

But the Prestige feels worth the money because it includes some of the best available kit. The self-park system squeezes into crazy-tight parallel parking spaces and is very intuitive, the adaptive cruise control is well-mannered, and the sound system/wireless charging combo make the interior much more enjoyable.

When it comes to in-cabin tech, the Q5 is, as we said, dated. Our top-trim Prestige model swaps the standard car’s 7.0-inch display for a bigger 8.3-inch unit, but unfortunately, it’s not a touch screen. This car still relies on the Audi clickable scroll wheel with a touchpad as the sole point of interaction, which isn’t the greatest. For the latest in Audi screens, you’ll have to order a 2021 model. Scoring back some points, though, is the 12.3-inch Virtual Cockpit instrument cluster, which remains a staff favorite. It’s configurable, looks great, and offers additional information in this car like charging information and navigation according to the most range-friendly route. Apple Carplay and Android Auto come standard, though neither are wireless like in some other Audis.

Even with its big battery pack, the plug-in doesn’t skimp on interior space compared to the standard Q5. Remove the nifty carrying case for the home charger and the cargo hold is good for 25.1 cubic feet. Fold the second row flat and it expands to 53.1 cubes. However, this is down on space to the BMW X3 plug-in, which offers 28.7 and 62.7 cubic feet, respectively.

With the least expensive Q5 plug-in starting at $52,900, our Prestige model with a few extras comes in at $63,890, including the destination charge. Opting for the plug-in comes with an $8,900 increase in price, but Audi confirmed that the car is eligible for a $6,712 federal income tax credit, plus any available state incentives. Where we live in Miami, for example, we’d save an extra $500 thanks to local tax credits.

So, in practical terms, we’re talking a roughly $1,600 penalty for the plug-in, which just isn’t daunting enough to scare us away. Sure, it would take a lot of 23-mile electric drives to make up that difference in fuel savings, but that’s not the whole story. The Q5 is a strong luxury crossover option to begin with, and this hybrid powertrain only makes it better.

We love the car’s smooth electric-assisted acceleration and appreciate how Audi worked to keep noise levels down in the cabin. It’s lacking any serious driver-focused excitement and the design isn’t exactly showstopping, but those are smaller complaints that don’t overshadow the positives for someone looking for a comfortable luxury SUV.

Check back for more updates as we continue living with the Q5 plug-in, but after our initial testing phase, we’re left with a strong first impression.