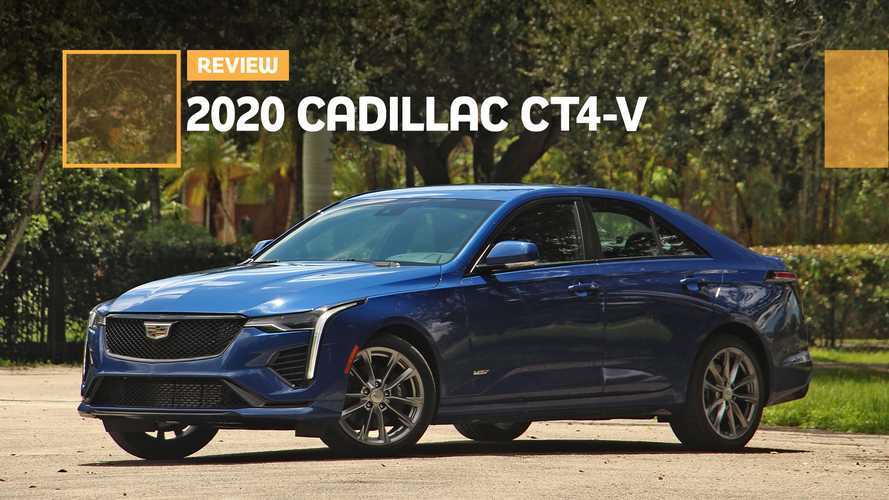 Cadillac is in the midst of a renaissance. Again. Maybe. The company recently uprooted its New York HQ and moved back to Detroit, just released the first (concept) vehicle in what it says will be an entire portfolio of EVs, and promises even more in the way of performance, headlined by the upcoming “Blackwing” range. But if the 2020 Cadillac CT4-V is even a small indication as to how the brand's future will look, there's still work to be done.

The CT4-V feels uninspired, especially following a fantastic first act in the ATS-V. And the fact that it's more than 100 horses down on its predecessor isn't even the biggest problem. The CT4's steering is out of whack, its technology is outdated, and it lacks the same overall refinement you get from competitors like BMW and Mercedes-Benz. In terms of what you want of a compact luxury performance car, the CT4-V ticks few of the right boxes.

We knocked the larger CT5-V for being too bland, but the CT4-V looks a bit sharper. The smaller Caddy sports a nice waterfall headlight design, a clean grille shape, and a large lower vent indicative of its aggressive nature. There are two smaller “vents” adjacent to the headlight's waterfall accent that look good, too – but they’re totally fake.

We also like that the CT4 has a more traditional Cadillac shape than the larger CT5, and the proportions are just right. The body is tapered, with conventional sedan styling at the rear, a subtle ducktail spoiler, quad exhaust tips, and angular taillights. That body looks even better draped in Wave Metallic paint as on our tester, a $625 option.

But the CT4's cabin suffers from the same issues as its sibling, the CT5. The hard plastic trim pieces and flimsy dials from the larger sedan litter the cabin, and the same two redundant, off-center knobs below the 8.0-inch touchscreen carry over. There are duplicates of those buttons just behind the gear shift lever.

There’s nothing that stands out in the CT4-V in terms of comfort. The ride is firm, but not uncomfortably so; the CT5-V with its available Magnetic Ride Control and longer wheel base definitely feels cushier. The faux leather seats are decently soft and supportive, too, but real leather requires an extra $1,000 – and it’s probably better. And sound deadening is solid overall, apart from the annoying exhaust note. The noise is like a mix of a lawnmower and a broken go-kart.

The CT4 also gets knocked for interior space. The front compartment is fine, with plenty of room for your 6-foot-tall author to stretch out, but the back seats are difficult to get into and could use some extra legroom – it’s a bit tight. The CT4-V’s 36.5 inches of rear headroom is solid comparatively (the BMW M235i Gran Coupe has 35.6 inches and the Mercedes-AMG CLA 35 has 35.7 inches), but the Cadillac’s 33.4 inches of rear legroom is worst in class. And the CT4-V’s 10.7 cubic feet is easily bested by the smaller BMW 2 Series Gran Coupe (15.1 cubes).

Compared to the twin 10.3-inch displays you get standard in the M235i Gran Coupe and the CLA 35, the CT4-V’s 8.0-inch screen ($800 with navigation and premium Bose audio) is puny. Plus, as we mentioned, the redundancy of having two volume knobs and two scroll knobs is pointless.

Wi-Fi, Apple CarPlay, and Android Auto all come standard – and when CarPlay works, it works well. But in our week with the CT4, the wired CarPlay connection was spotty. We also received an “SD Card Has Been Removed” warning at every startup, even though there were multiple attempts to reinstall it properly. We’re not sure if this is a one-off issue (we didn’t experience it during our first drive) or something CT4 owners have experienced.

Using the term “steering feel” when describing the CT4-V would be disingenuous because there’s very little of it. The dead zone on center is offensive, so much so that you can wiggle the wheel by about five degrees (by our imperfect measure) in either direction before the car responds. We tugged at the wheel slightly at 70 miles per hour on the highway and the Cadillac didn't flinch. Even in the most-aggressive Track mode, the steering doesn't respond any quicker – it just gets heavier. In all other drive modes, it’s lifeless.

The only way to get anything out of the CT4-V is to push it. Hard. The same very good Alpha platform from the outgoing ATS-V carries over, so at least dynamically this car is excellent, but only at the limit does the steering actually render any noticeable feedback. And the CT4 does feel decent at the limit – it's flat and quick, and it can carve up a corner with some conciseness. And while we’d probably prefer the standard rear-wheel-drive (because it’s more fun), our all-wheel-drive tester had a ton of grip.

The CT4's turbocharged 2.7-liter engine puts down 325 horsepower and 380 pound-feet, which feels like plenty, even if our all-wheel-drive Caddy's 4.9-second 60 sprint isn't competitive on paper – the M235i is slightly quicker at 4.6 seconds. Power delivery is great, with a lot of torque down low, and there's no noticeable power plateau until you pass 4,500 rpm. And even then, this four-cylinder still feels like it has a lot of stamina up near redline.

We have a slight issue with the 10-speed gearbox and its occasional sloppiness during daily driving. But much like the steering, the gearbox is quicker and more responsive at the limit, specifically in Sport and Track modes. The engine doesn't sound great, either – even though the sound is amplified through the speakers – and it’s unusually harsh on startup. The whole car shakes when you press the ignition. It's easy to tell that this four-cylinder comes from a pickup truck.

The Cadillac CT4-V comes standard with safety features like automatic emergency braking, forward collision alert, and rear park assist with a high-definition backup camera. Our tester gets the optional $800 Driver Awareness Plus package, which adds a following distance indicator, lane-keep assist, lane-change alert, and rear-cross traffic alert. And they all worked fine in our test – our only gripe was the overly sensitive lane change alert. Thankfully, there’s a button on the center console that turns it off.

But if you want more advanced features like adaptive cruise control with stop-and-go, high-speed automatic emergency braking, and rear automatic emergency braking, you have to select the Driver Assistance package. That package alone is a $1,100 option, but it also requires the Technology package ($1,150), the Driver Awareness Plus package ($800), the Climate package ($1,200), and for some reason, leather seats ($1,000). Adding the Driver Assistance package to our tester would cost an extra $4,650, according to Cadillac’s configurator. Why?

The Cadillac CT4-V gets 20 miles per gallon city, 28 highway, and 23 combined. Those are worst-in-class numbers. The most efficient option in the segment is the Mercedes-AMG A35, which returns up to 27 mpg combined. The M235i Gran Coupe (26 combined), CLA 35 (25 combined), and the Audi S3 (25 combined) follow the A-Class closely, with the CT4-V down further.

At $44,495 to start, at least the Cadillac CT4-V is a relative performance bargain. It’s the second most affordable option in the segment, behind the $43,000 Audi S3 – and our tester still costs just $48,815 with options. The options list includes things like the $800 Navigation and Premium Audio package, the $800 Driver Awareness Plus package, the $625 Wave Metallic paint job, the $600 Cold Weather package, and $500 for all-wheel drive.

By comparison, the BMW M235i Gran Coupe costs $45,500 to start and the Mercedes CLA 35 costs $46,900. And while both do offer more standard features than the Cadillac, things like leather and larger displays, each costs north of $50,000 with similar safety equipment. 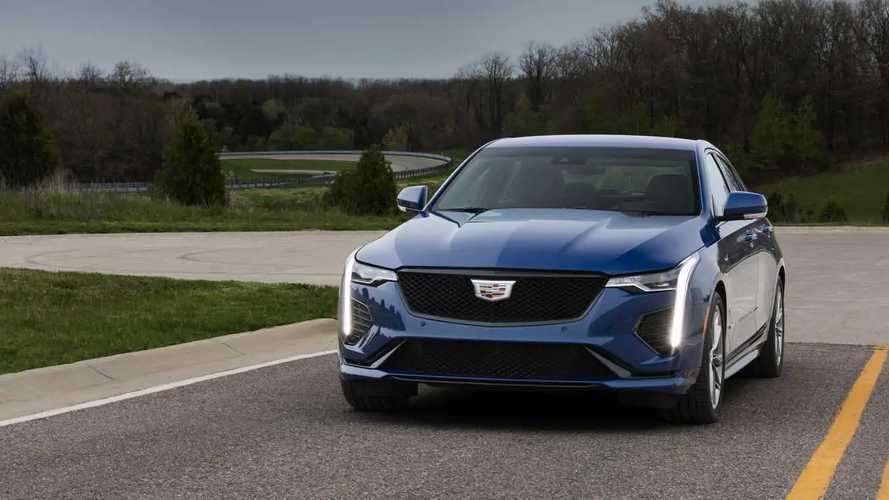