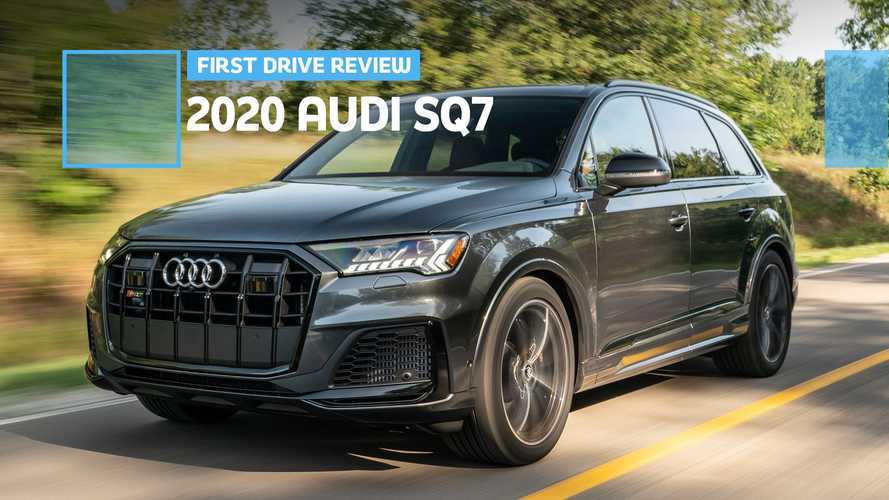 Back in the blissful days before turbocharging, supercharging, and all other replacements for displacement, Audi introduced its first SUV. The three-row Q7 arrived in the US in 2007 armed with one of Volkswagen’s famed VR6 engines, a 3.6-liter, or a variant of the near-legendary 4.2-liter V8, which had already distinguished itself in the S4, RS4, and R8. As powertrain lineups went, this was a good one.

And like all good things, it didn’t last. 2011 marked the end of the 4.2-liter’s run in the Q7, and since then, this crossover has been predominantly a six-cylinder affair, first with supercharged V6s and then turbocharged engines (a four-cylinder turbo is also available, but we don’t recommend tasking a 248-horsepower engine with managing 4,800 pounds).

The 2020 Audi SQ7, then, marks not only a return to form but a marriage of old and new – there’s a 4.0-liter V8 that’s in cahoots with a pair of turbochargers to produce 500 hp and 568 pound-feet of torque, improvements of 155 hp and 253 lb-ft over the soulful 4.2-liter engine. The SQ7 not only captures the character of its earliest ancestor but is an improvement in every important way.

Of course, we know this engine well. Volkswagen Group’s twin-turbocharged 4.0-liter V8 already serves in a variety of Audi’s larger performance products, from the S6 all the way up to the RS Q8. The engine is also a key element in the hotter versions of the Porsche Cayenne and Panamera, as well as the Bentley Continental GT and Bentayga, and the Lamborghini Urus.

Combine that knowledge with the fact that the SQ7 shares its MLB Evo architecture with the Cayenne, Bentayga, and Urus (among others), and you might think to dismiss the SQ7 as little more than a four-ringed version of those vehicles with an extra row of seats. But this version of the modular platform and the tweaked 4.0-liter stand out from VW Group’s other products.

The SQ7's twin-turbocharged 4.0-liter V8 already serves in a variety of Audi’s larger performance products, from the S6 all the way up to the RS Q8.

For a start, the SQ7’s 4.0-liter is like the middle child in the family. It’s more potent than the 443-hp Cayenne GTS, but less than the 541-hp Cayenne Turbo and Bentayga V8, not to mention the 591-hp RS Q8 or 641-hp Lamborghini Urus. Still, with 500 hp and 568 lb-ft, the V8 feels perfectly suited to managing the 5,291-pound Audi, allowing it to scamper to 60 miles per hour in a brisk 4.3 seconds. That’s two-tenths down on the more powerful BMW X5 M50i, although the SQ7 is nearly a full second quicker to 60 than the Mercedes-AMG GLE 53. And the Audi's standard third row is optional on the GLE and unavailable on the V8 X5. We’ll call that a W.

It’s a winner on the road, too. The twin-turbo V8 is eager to rev and generous in its power delivery, allowing the SQ7 to surge off the line. Audi’s 4.3-second estimate definitely seems reasonable. That said, if you’re looking for an engine with histrionics or that’s happiest above a certain engine speed this isn’t it – the SQ7’s engine always feels smooth, yet energetic and alive.

And when using one of the more aggressive driving modes, it sounds killer too, with the V8 singing a little more clearly out the dual pipes at the back (yes, there are four tips, but there’s no physical connection to the dual-exhaust system). And if you aren’t interested in noise, driving in Normal or Comfort mode allows the smooth growl to fade into the background and serve as a subtle reminder that you didn’t settle for a V6.

As with Volkswagen Group’s other 4.0-liter vehicles, the SQ7’s twin-turbo V8 works alongside an eight-speed automatic transmission, and it’s a fine piece of machinery. In relaxed driving, the gearbox is smooth and mostly invisible. It does hang a bit on wide-open throttle upshifts, although selecting the Dynamic driving mode forces quicker, sharper shifts.

Manual mode is a hoot, even with the Audi’s typically small wheel-mounted paddle shifters – our only complaint is that shift shock is rather severe when using (or misusing, one could argue) to short shift. Hey, sometimes we just didn’t think to slot back into full automatic and change the drive mode.

Keeping the 500-hp SQ7’s shiny side up is the job of a four-corner air suspension. Unlike the optional air springs on the standard Q7 though, engineers tuned the SQ7 for more aggressive behavior. The so-called “S-tuned” suspension boasts firmer dampers and air springs, while the entire car benefits from standard four-wheel steering. There are stiffer bushings too, which provide more direct steering behavior, and if you option the $5,900 Sport pack, active anti-roll bars that quash body roll and provide even sharper responses from the tiller.

With those enhancements, the SQ7’s handling character is totally worthy of the S badge on the nose. Our tester lacked the Sport pack and active anti-roll bars, but unlike some bigger, heavier products, we aren’t sure they’re really that necessary on the SQ7 – the old-fashioned sway bars and the revised suspension provide flat, neutral, and very tightly controlled boy motions. This big three-rower feels surprisingly nimble when pushed hard. If this is what a standard SQ7 is like, we can’t imagine how good a Sport pack-equipped car is (although it’s probably not $5,900 better…).

The SQ7’s handling character is totally worthy of the S badge on the nose.

The steering improvements are particularly encouraging. Vehicles that can manage so many passengers don’t normally feel so engaging in the bends. Even if the actual level of feedback on offer was low, the responsiveness of the steering and the way the SQ7’s suspension changed direction made it feel suitably enthusiastic.

Naturally, Audi’s Quattro all-wheel-drive system is on hand to make sure the V8’s power arrives at the ground, although snagging the Sport pack for its sport differential would likely aid matters. That said, even in dynamic situations, the base SQ7’s behavior when blasting out of corners is faultless. Just bury the pedal and trust the default forty-sixty torque split to do its thing and rocket this big three-row ahead.

In your author’s humble opinion, Audi’s S models have always been the best looking of the bunch, improving on the benign (but attractive) styling of the A and Q models without going to the same ludicrous extremes as the RS variants. That’s true of the SQ7 – this is the better-looking variant of a rather unattractive car. Its recent facelift cursed the fascia with a derpy set of headlights – the LED projectors give the look of beady pupils. We do dig the new LED running lights, as well as the light show the SQ7 puts on at the back of the car when unlocking.

There are the usual S touches on this new body, too. Standard 21-inch, two-color alloy wheels set the tone, while the slightly lower ride height and flared wheel arches give the SQ7 a more attractive stance.

The cabin is a master class in elegant and inoffensive design.

Audi also revised the front fascia, tweaking the splitter and finishing the grille surrounds and slats in a platinum shade. S-signature “Alu-optic” mirror caps are on hand too, while out back, four prominent exhaust outlets and a revised diffuser do as much to inform other motorists of what just passed them as the “SQ7” badge on the tailgate. A Black Optic package replaces much of the brightwork with gloss-black elements, if you prefer that sort of thing.

The cabin is a master class in elegant and inoffensive design, with quilted leather seats and the choice of flashy carbon-fiber trimmings. Alcantara door panels lend an additional degree of sportiness, while an S-specific steering wheel is on hand (pun intended) to put the driver in the mood. We just wish Audi would have granted the SQ7 with a better set of wheel-mounted paddles – the tiny plastic units have a nice action, but the rest of the cabin is a big cut above what you’ll find attached to the wheel (which is also true of Audi’s other S and RS offerings).

On the tech front, the SQ7 (and Audi’s broader range of large vehicles) offers the best integration of a two-screen infotainment system. A 12.3-inch digital cluster running Audi’s latest version of Virtual Cockpit complements the 10.1-inch upper display and 8.6-inch lower touchscreen, the latter of which offers up quick responses and a perfect level of haptic feedback.

Of course, getting all this extra performance and most of the additional style comes at a price. In the case of the SQ7, it’s $84,800 for the Premium Plus trim. If you want the Prestige, like our tester, plan on plunking down $90,400 and scoring gear such as a head-up display, an aluminum finish for some of the interior buttons, and two packages that account for $2,000 and $1,750, respectively, on the Premium Plus.

The former is the Executive pack, which adds ventilated seats, a heated wheel, ambient LED lighting, and heated rear seats, while the latter introduces a competitive set of active safety nannies, none of which are uncommon on other large Audis.

Even at $90,400, this three-row performance SUV feels like a bargain we’d happily accept

Considering where the SQ7 falls in the broader Volkswagen Group hierarchy, even the Prestige feels like a good deal. This car dramatically undercuts every other performance-focused utility vehicle on VW’s MLB Evo platform – the nearest cousin that can match its price and performance is the $107,300 Porsche Cayenne GTS. At the same time, though, the big, fast Audi lands neatly between the less powerful Mercedes-AMG GLE 53 ($72,350 to start) and the fire-breathing GLE63 S ($113,950).

In other words, even at $90,400, this three-row performance SUV feels like a bargain we’d happily accept if speed and dynamics mattered as much as price in our pursuit of a sporty six-passenger SUV. 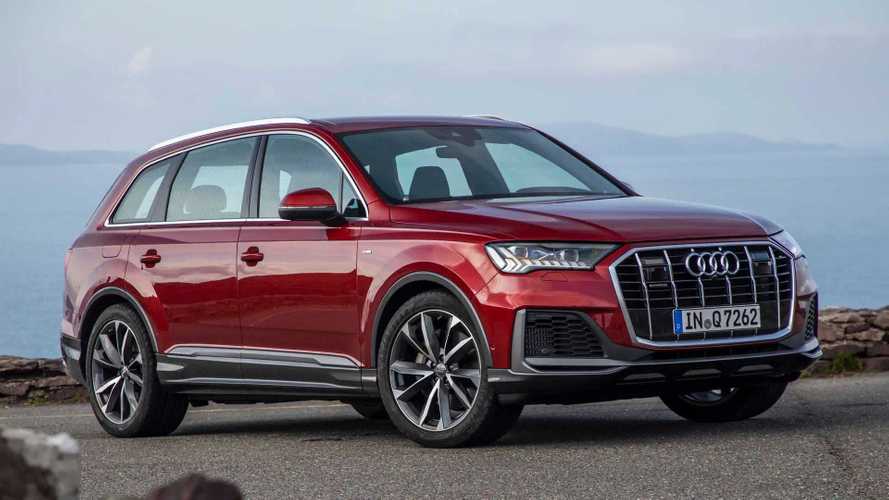