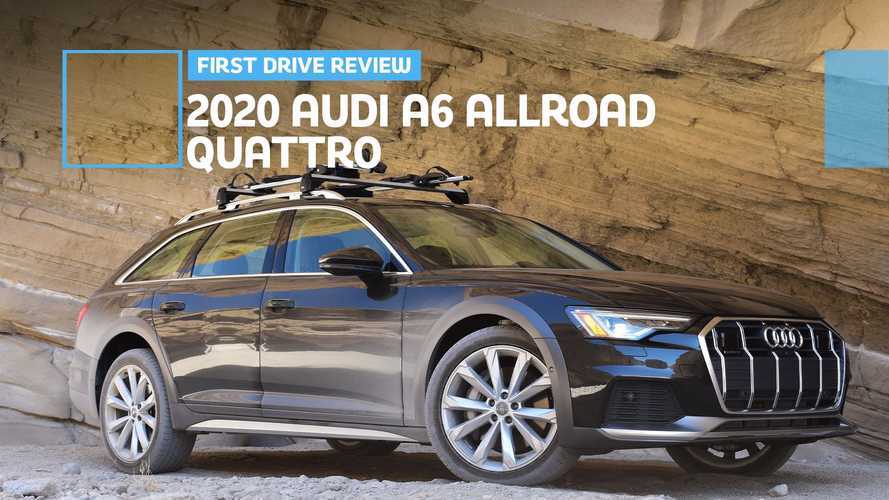 A stylish and comfortable luxury SUV in a station wagon wrapper.

When I was 12 years old, I learned that if I was very well-behaved, I could walk through the nearby dealership lot and maybe even sit in some of the showroom cars without any trouble. It was one of those summer morning sojourns when I met the 2001 Audi Allroad Quattro, a proto-SUV based on the A6 Avant wagon that kicked off my love for weird, crossbred mutt cars. And now, two decades later, I’m in its direct descendant, the 2020 Audi A6 Allroad.

With trim Teutonic styling paired with chunky body cladding and a lifted air suspension, that Ur-Allroad became one of my first favorite “normal” cars, blending luxury and utility in perfect harmony. The first-gen wagon/SUV went away after the 2005 model year in the US, as Audi started foisting the Q7 (and later, the Q5) on all-terrain pretenders in Highlands Ranch and Shaker Heights and Queen Anne. An A4 Allroad with steel springs joined the lineup for 2013, but those of us who fell in love with the air-suspended wagon were bereft – until now.

And boy, nostalgia is a heck of a drug. Within about five minutes of thumbing the console-mounted starter button, I’d convinced myself that the 2020 A6 Allroad is the best machine on four wheels right now, even without the original’s distinctive (and rare) plaid cloth interior. And while those shiny first impressions dulled somewhat over the next seven days, the A6 variant still occupies a rarefied space high up on my fantasy shopping list.

I spent my first day with the wagon running all around Los Angeles to get supplies for a camping trip, and in the urban jungle, this Audi is stylish. Allroad-chic design elements look surprisingly graceful on the A6’s form: “Alu-Optic” front and rear skid plates, Scandium Gray rocker panels and wheel arches, and a model-specific grille with beveled slats enhance the Avant body. Jeremiah Johnson in a Henry Poole suit, this wagon.

Canted toward the driver, the center stack looks beautiful, but using the touch-intensive controls is a bit difficult while driving. The Allroad also boasts wild ambient lighting – electric blue nighttime accents impart a vague EDM effect. It’s jarring at first, but still quite likeable, particularly the illuminated Quattro badge on the passenger-side dashboard that comes alive when the sun goes down.

Audi could have carved out more space in the center console, though. The shallow armrest bin could barely hold my phone and that of my travel partner; you also get smallish pockets in each door and two cupholders next to the shifter, as well as a rear-seat armrest with a cupholder and paperback-thin cubby. For a vehicle that seems tailor-made for an all-terrain road trip, “stuff storage” comes at a premium.

People storage, however, is abundant. All four outboard seats offer plenty of head- and legroom, with enough support and adjustability to fit my long-legged frame. The massage feature of the multi-contour driver and front passenger seats (part of that Luxury Package) was also a pleasant treat after a long morning in the desert heat. And the 30-cubic-foot cargo area is large enough for a relatively lavish camping trip for two, without even having to jettison the power cargo cover.

On-road, the Audi carries itself as though it’s walking on clouds – and it kind of is, actually. Standard, Allroad-specific air springs practically erase small bumps, and they absorb larger impacts with barely any cabin intrusion. In any of the Allroad’s five drive-select settings, the SUV wagon is one smooth operator.

The turbocharged 3.0-liter V6 matches the suspension’s isolated competence, too. Making 335 horsepower and 369 pound-feet, Audi says the engine shoves the Allroad to 60 miles per hour in 5.1 seconds, a number that’s totally believable. Paired to a seven-speed dual-clutch gearbox, the turbo mill is almost always ready for a quick highway merge, with only brief overtures of turbo lag upon hitting the go-pedal. Once boost comes on, however, you’re in extra-legal territory in no time.

When it came to the US for the 2001 model year, the Allroad Quattro joined a cadre of ruggedized wagons like the Subaru Outback and Volvo V70 Cross Country, offering a measure of off-road capability in a familial June Cleaver form. Owing to its provenance, I’d have been remiss to not sample the 2020 Allroad in some dirt, and why not bring a companion along for the ride?

The 2020 Allroad is lower to the ground than its predecessor – 5.5 inches of ground clearance in its normal setting, offering up to 7.3 inches at speeds below about 22 mph, compared to a maximum of 8.2 inches for its 2001 counterpart. This lifestyle vehicle isn’t a rugged off-roader, but it’ll still do some pretty fun things. As such, a weekend campsite at Julian, California’s Fort Cross Old Timey Adventures – with day trips to the nearby Anza Borrego Desert – made lots of sense, allowing me to enjoy some off-roading in the morning, legendary apple pie in the afternoon, and campfire sing-alongs at sunset.

And in Anza Borrego, the Audi performed faultlessly. In its eponymous “Allroad” drive-select setting, it boasts 6.7 inches of ground clearance, even at higher speeds. That allowed my significant other and I to traverse the hot sand at relatively high speeds, preserving momentum and preventing the Audi from getting bogged down in the fine, silty dirt.

In that suspension setting, the Allroad boasts plenty of suspension travel and reasonable underbody protection, good for traversing a few shallow streambeds without dragging the belly or lifting a tire. My trail selection also included a rock garden that required using the stiffly sprung 7.3-inch lift mode, but the Allroad came through it unscathed, offering decent low-end torque for careful driving and loads of power for a couple dusty, lurid slides.

A Hiking Boot, Not Track Flats

On the hot asphalt to and from the desert, I appreciated my Prestige-trim tester’s ventilated seats, tranquil ride even with the wind-catching roof rack in place, and wireless device charging and Apple CarPlay. Android Auto still requires a hard connection, but that’s pretty common (for now). Something that repeatedly got annoying, though, was the dashboard’s highly reflective aluminum trim – horizontal and slanted swaths of the shiny stuff targeted the afternoon sun’s rays right at my eyeballs.

The mountain range that separates Borrego Springs and Salton City from San Diego is an excellent place to test a vehicle’s handling. And on the canyon asphalt, the Allroad is, charitably put, a grand tourer. The dirt-friendly tires do their best to manage 4,486 pounds of Audi, but weight and ride height conspire to create plenty of body roll, even in the drive selector’s stiffest Dynamic mode. In fact, we thought that Auto mode provided better, more predictable handling.

That said, the Allroad’s pleasant behavior when bounding through the dirt at speed completely absolves its middling transitional response on a twisty road. The station wagon also buys indulgences for its limit handling via a remarkable freeway demeanor. With supportive seats, a cushy ride, and that lovely turbocharged V6, the Allroad eats up the miles – I’d happily drive it to Florida tomorrow, taking the long way around.

Although my love of the original Allroad colored my first impressions of the 2020 machine somewhat, the reborn wagon nonetheless found its way into my heart. After discovering some of its less desirable characteristics, I tried to talk myself out of liking the new Allroad. My tester’s $65,900 base price, ballooned to $74,940 via the Prestige and Luxury Packages, compounded the internal debate. That coin could get me into a similarly stylish, loaded Volvo V90 Cross Country with a few grand to spare. It could also go toward a more traditional SUV, like a lightly optioned Range Rover Sport or a well-kitted Velar.

And while those machines are indeed nice, the Allroad keeps pulling at me with memories of its velvety ride, responsive powertrain, modern interior, reasonable rough-road capability, and poshly handsome styling. My answer to the $75,000 question is a genuine “I don’t know,” but this Allroad is definitely on my shortlist.